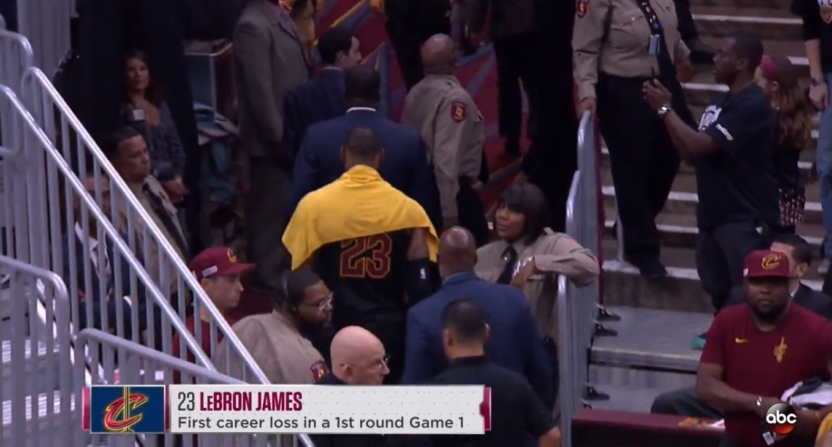 Today was the biggest stage the Pacers have played on this season, the Sunday afternoon ABC slot for Indiana’s opening playoff game in Cleveland.

And the Pacers just flat worked the Cavs in their own building, taking a 33-14 lead after the first quarter. Cleveland chipped away thanks to a triple-double from LeBron. The Cavs cut the lead to seven with 10:30 remaining in the fourth quarter thanks to some questionable Lance Stephenson decision-making and typically excellent James play, but after a timeout and Victor Oladipo’s return to the court, the Pacers finished the contest on a 22-11 run to seal it.

Oladipo was absolutely filthy, going off for 32 in his first Pacer playoff game. He hit 6-9 from behind the arc, and needed just 19 shots for his 32 points, while adding 6 rebounds, 4 assists, 4 steals (!), and a block. It was a tremendous all-around performance, and Oladipo’s +/- bore that out; he finished +21 for the game in 37 minutes. If he keeps playing like the best player in the series, and the non-Bron Cavs continue to look timid, this could be a short series in a way no one expected.

Here are Cavs fans booing, which is just great:

This series was expected by just about everyone to be a Cavs win. (All of ESPN’s experts picked the Cavs, for example.) That’s despite the Pacers having a better point differential for the year, and despite Indiana having won three of their four regular season games.

And that’s fine! LeBron in the first round of the playoffs has been won of the surest bets in sports; he hadn’t lost a game in the opening round since 2o12. But it’s different when your team is first or second and the Eastern Conference is terrible, has been the recent trend.

This Cavs team is very much LeBron’s worst team since he left for Miami the first time around. And while some of that blame falls on LeBron himself (how much depends on who you believe more on the topic of why Kyrie wanted out so badly), the Cavs had to remake their entire roster at the deadline for a reason. The new parts worked somewhat well down the stretch, though Cleveland lost out to Philadelphia for the third seed in the East, and LeBron had to play 82 games for the first time in his career to make it work at all.

The Pacers, meanwhile, have quietly been doing their thing all season. (Their thing being consistently winning basketball games.) Is the series over? Not at all. LeBron is LeBron. Some Cavs shots will fall. Some Pacers shots won’t. The Cavs could blitz Indiana on Wednesday (somehow we have to wait three days for game 2) and then cruise to a series victory. But today hopefully demonstrated that the Pacers aren’t a mirage. They’re not fiction, despite the lack of nationally televised evidence. They’re really good.