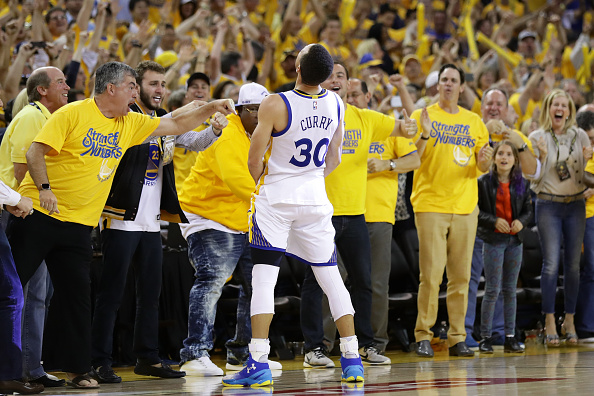 The Golden State Warriors’ 96-88 Game 7 win over the Oklahoma City Thunder lived up to the hype, and was a fitting conclusion to what was an entertaining series, to say the least.

It was evident early in the game that Russell Westbrook was going to try to draw fouls and get to the free throw line. It took a few possessions of Westbrook taking questionable jumpers and flailing his arms and legs, before he settled in and just started playing the game, and was able to collect four boards and seven assists for the half to go along with his game-high 14 points. His explosive drives to the basket were as prominent as they had been all series, something that is unparalleled in the game today.

The Thunder’s biggest fault in the first half, had to have been that Kevin Durant had taken just five shots. Steven Adams, Andre Roberson, and Enes Kanter — none of which you would even consider the Thunder’s third option on offense — took more shots than Durant did in the half. Durant would match that total in the third quarter, but Steph Curry would find his own rhythm — with a trio of threes — as the Warriors outscored the Thunder by 17 in the quarter. That run included this Anderson Varejao drive to the basket, which was telling of how the game was going to end up:

The fourth quarter perfectly encapsulated what the Warriors had done to teams all season. The Thunder were throwing punches at them, looking like they would trim the Warriors lead, but the Warriors punched back harder every single time. Kevin Durant took things into his own hands late, but it wasn’t enough to get his team back into the game and over the top. The Warriors ability to fight back on the Thunder, combined with the roaring crowd at Oracle in a decisive Game 7, was just too much for the Thunder to overcome.

The unanimous MVP played like the unanimous MVP in the fourth quarter, with 15 points on 5-of-6 shooting from the field, and definitively ended the series with this shot:

The Game 7 loss should not be looked upon as a knock on the Oklahoma City Thunder, or choking. They were completely healthy for the first time in a few years, and yet still had plenty of smaller nagging injuries over the course of the season. They took one of the best teams we have ever seen grace an NBA floor to seven games, after knocking off a 67-win San Antonio Spurs team. Kevin Durant, Russell Westbrook, and the rest of the Thunder’s cast of characters (like a streaking Dion Waiters) was the closest thing to the thrills that the Warriors brought all season that we’ve seen, and it was fun to watch.

Shoot, they even made the Death Lineup look bad for a couple of games.

They were playing their best basketball at the right time of the year, and not just on the offensive end of the floor, as we know they are more than capable of holding their own there. Defensively, the Thunder made one of the bigger (and more surprising) leaps on one end of the floor that we’ve seen by any team. Aside from Andre Roberson, Durant was great defensively for the majority of the series, and Steven Adams has solidified himself as a force in the paint, and one of the toughest players in the league.

Yet, it’s impossible to guard something like this, it’s just not going to happen:

The Thunder were so great during the series, that they put a hint of doubt into the minds of people that had watched the Warriors all season. That in itself was a win. Golden State was team that was able to sit its stars for many fourth quarters over the course of the regular season, and had beat up on not only inferior teams across the league, but against teams that were expected to be their biggest roadblocks en route to the NBA Finals. For the Thunder to take the series seven games despite losing a 3-1 lead, is usually not acceptable, but it’s understandable against this opponent.

For the Warriors, this was business as usual for them. Despite their greatness, arrogance, and confidence, they knew the challenges that they faced in the Thunder, who have one of the best duos that the league has ever seen, a pair that will undoubtedly be in the Hall of Fame one day. The Warriors were certainly off rhythm throughout the first four games, and still didn’t look like the team we watched all season in Games 5 and 6, but they know what it takes to win, and Steve Kerr made the necessary changes to help guide them. It wasn’t pretty by any means, but it was a championship-type effort in the end.

The Game 7 victory should also help silence those that felt that the Warriors title run last year was a fluke. This was a challenge that was as real as it gets, and the Warriors came out on top, even after seeing their lowest of lows that they’ve experienced in the past two seasons in consecutive games. They pulled themselves together, and proved to be the better team.

If the NBA Finals are anything like the Western Conference Finals were, it’s going to be quite the treat.