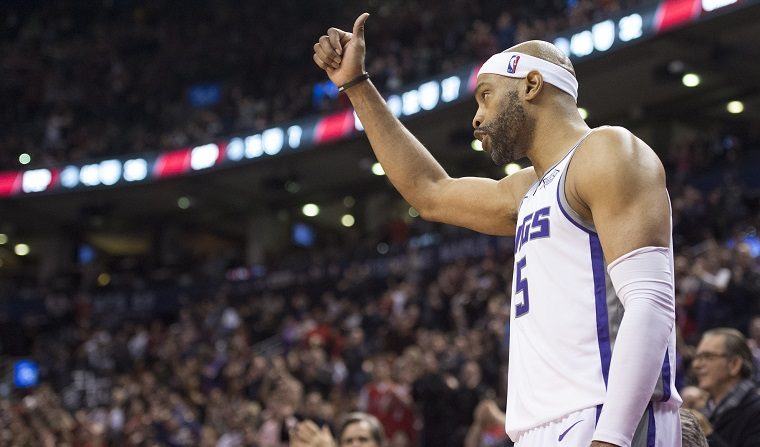 Vince Carter held court outside the Sacramento Kings locker room for more than 20 minutes before Tuesday’s game against the Brooklyn Nets, looking back on his Hall of Fame career, discussing his unique longevity and possibly envisioning a future in the rafters for teams in two different countries.

At 40 years and 329 days old, Carter is the oldest player in the NBA, now in his 20th season with his seventh different team. After more than six seasons helping build basketball in Toronto with the Raptors, Carter spent more than four seasons with the New Jersey Nets, and has certainly still felt the love even with the Nets’ move to Brooklyn.

Carter’s relationship with the Raptors and their fans is far more complicated, which you can read in more detail here, but he was given multiple standing ovations when Sacramento visited Toronto on Sunday.

“Sunday was great,” Carter said. “It was just different. All the other years, I don’t know.”

Carter poignantly compared it to the Magic Johnson-Isiah Thomas conversation that aired on NBATV this week.

“It’s kinda like that moment. There wasn’t much that had to be said,” Carter said before pausing, “and then all of a sudden they embraced. It’s kind of that feeling.”

“It was just a great feeling, plain and simple,” Carter said. “It’s just like yeah, it feels right.”

So of course Carter would love to have his jersey retired with both the Raptors and Nets.

“When you hear people talk about it, like you’re talking about it now, of course,” he said. “I’m sure in years to come when you walk in and see your name in the rafters in the arena, in a professional arena? That’s a dream come true.”

Fans at the Barclays Center were chanting his name, and a small but vocal “Tar!! Heels!!” chant broke out at one point, paying homage to Carter’s alma mater, North Carolina. Despite calls from the crowd, VC didn’t see the floor after playing an instrumental role in the Kings’ 101-95 upset win over Philadelphia on Monday night.

Carter has appeared in just 20 of Sacramento’s 31 games, a far cry from his years as a worldwide basketball superstar, becoming a huge force in growing the game in Canada. For an eight-time All-Star and an NBA legend, becoming a role player and a bit piece on a rebuilding team would be something a player of similar stature but larger ego wouldn’t even consider.

For Carter, it’s about “my willingness to do whatever it takes to stay on the team or to be effective on a team,” he told a group of reporters. It’s ultimately going to be a part of, albeit a small part, of his enduring legacy.

“For me, it’s just I loved to play and I found a way to stay on the floor and stay on the team,” he said. “That’s what I look at more than anything, is that it’s not easy.”

For Carter, being a bench player is partly about getting to show the world that he’s much more than just a scorer and a dunker, criticism he vociferously received early in his career.

“Defensively, communicating. Making sure everybody else is comfortable on the floor,” Carter said. “Right now, at the tender age of where I am right now, I get to show everything else.”

Unable to use his once-elite athleticism, Carter now has to do subtle things on the court to get an edge.

“Now it’s all about playing the angles,” Carter said. “I might not be able to meet the guy at the top of the rim, but if I can get in front of him and get my hands on the ball before he gets up, just things like that.”

Staying in playing shape at 40 starts in the summer with months of constant and diligent preparation, and continues during the season by coming hours early to arenas for work that younger players take for granted.

When Carter loses the will to prepare and his love for the game subsides, that’s when he’ll walk away, he said. That hasn’t happened yet. Carter said he wants to play at least another year.

“I love working with young guys who want to work, want to get better,” Carter said. “Because I have nothing to prove, I have nothing to gain. I just want to see them prosper and become what they want to become.”

For Carter, who listed Charles Oakley, Kevin Willis, Antonio Davis, Dee Brown and Doug Christie as veteran players who mentored him during his early Raptors days, it’s about paying it forward and helping people who are willing to learn, ask questions and grow as players.

“I’m willing to take a beating from him for his growth,” Carter said.

Carter said he didn’t want to go into coaching and would be more inclined to be a broadcaster once his playing days are over. One reporter mentioned Tom Brady, who said that he wants to play until 45. Carter laughed that off, saying that won’t happen with him.