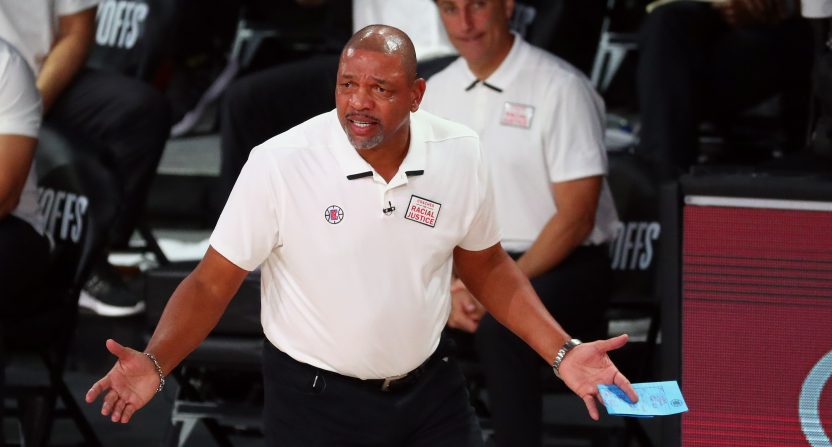 The Process in Philadelphia has failed. Now it’s time for The Reboot. The Philadelphia 76ers hired Doc Rivers mere days after Rivers was let go by the Los Angeles Clippers. His task is simple; get the Sixers to take the next step toward a title.

Simply put, the Sixers upgraded their head coaching situation, and it was certainly needed. Brett Brown was  a good soldier as the franchise went into a shameless tank mode to rebuild the roster from the bottom up, and he appeared to be the right guy for the early stages of the franchise starting to turn a corner. But after three disappointing early exits in the NBA postseason (back-to-back second-round exits the previous two seasons, and then a brutal four-game sweep against the Celtics in the NBA bubble), it had become painfully clear for any Sixer fan watching that Brown was not going to be able to get this team to take the next step.

Rivers will bring to Philadelphia one thing Brown did not, and that would be a career as a head coach in the NBA. Brown was hired off the coaching staff of the San Antonio Spurs with the upfront acknowledgement he was going to be given nothing to work with for a few years. Given that there are only so many NBA head coaching jobs available, Brown was fine with the situation, and the Sixers hoped he would bring  a little of that Gregg Popovich coaching acumen with him. Needless to say, that didn’t quite pan out. But with Rivers, the Sixers know what they’re getting in a head coach.

Rivers has been coaching in the NBA since 1999, and he has had just two teams that finished below .500 (and yes, he was fired in 2003 after a 1-10 start in the year the Orlando Magic failed to land Tim Duncan on the free agent market). On top of that career record, Rivers also has an NBA championship ring (2008 with the Celtics). Since 2007, a team coached by Rivers has finished lower than second place in its division just once (2013-2014 with Boston, a third-place finish). Rivers does have a ring, but he also comes to Philadelphia with his own stretch of postseason futility lately. The Clippers were bounced in the first round of the NBA Playoffs in 2016 and 2017, missed the playoffs entirely in 2018, and were sent packing in the first round of the 2019 playoffs. This season, despite the big addition of Kawhi Leonard, Rivers and the Clippers were eliminated in the second round by the Denver Nuggets after blowing a 3-1 lead.

So can Rivers do better in Philly?

This is the classic recipe of a change of scenery doing good for everybody. The Sixers needed to move on from Brown, and Rivers could embrace an opportunity to prove he still knows a thing or two in a different conference. Rivers will also get a chance to work with some new players in Joel Embiid and, perhaps more importantly, Ben Simmons. Rivers is a good offensive minded coach, so his tutelage of a player like Simmons could be just what the Sixers needed to get one of their best players to be even more well-rounded.

If the Sixers are going to take the next step toward being a legitimate contender, they either have to make Ben Simmons more of a consistent offensive asset or move on from him. Simmons does far too many things to simply send him packing for the sake of moving on. Giving Rivers a chance to work with him makes sense, as Rivers has been the head coach for number of players who have either been able to grow and evolve or adapt to something new under his watch. If Rivers can’t get Simmons to take more jump shots, then there may be more pressure on the Sixers’ front office to consider moving on from the former rookie of the year.

The offensive struggles aren’t just focused on Simmons. The Sixers would benefit from more offensive production and efficiency out of guys like Tobias Harris and Al Horford. The team simply can’t rely on Joel Embiid scoring 40 points a game, because even when he has carried the load this past season, the wins haven’t necessarily been guaranteed.

There are reasons to suggest Rivers will help the Sixers. He has a history of working the offensive gameplan to best suit the talent he has to work with, and he’ll have some talent as long as Embiid and Simmons (and Harris) are around. This was a specific concern under Brown, who made questionable substitutions and rotations for the sake of rotations that seemingly sabotaged any opportunity to create a rhythm. And coaching big personalities is nothing new for Rivers, who had the big three in Boston (Kevin Garnett, Paul Pierce, and Ray Allen).

Rivers seemingly beat out Mike D’Antoni and Tyron Lue for the Sixers job. Regardless of who was handed the job, the Sixers likely would’ve been in a better coaching spot on the sideline. But if Rivers can’t find a way to get the Sixers at least to the Eastern Conference Finals in the next couple of seasons, then the heat may be turned dup on general manager Elton Brand. This is Brand’s first head coaching change as the GM. If it doesn’t work out, then he may not be the one who makes the next decision.