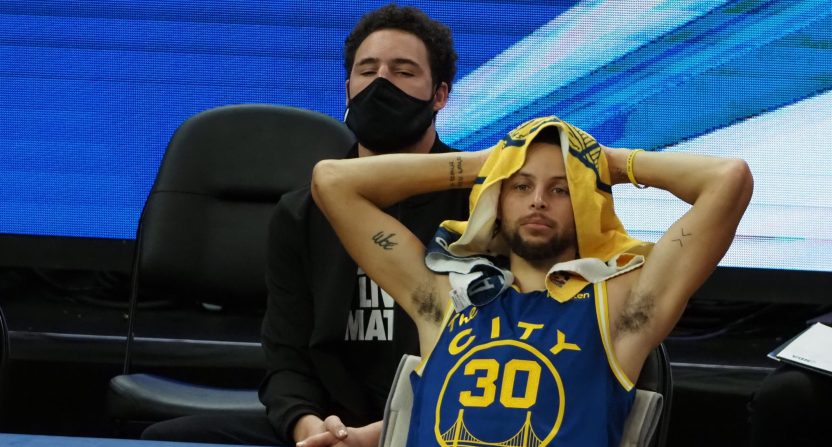 The Phoenix Suns and the Atlanta Hawks both reached the conference finals a year after not making the playoffs. That got us wondering: which teams could do the same next season?

Even if the Warriors don’t make a blockbuster move, they should be better. Klay Thompson returns from an Achilles tendon injury that caused him to miss the entire season. Rookie James Wiseman is also back after being limited to 39 games due to a torn meniscus. But will that be enough to contend in the loaded Pacific Division with the Phoenix Suns, Los Angeles Lakers, and Los Angeles Clippers?

Steph Curry finished third in NBA MVP voting, enjoying his best season since winning back-to-back MVPs in 2015-16. But he’s also eligible for free agency next summer if he doesn’t sign an extension by this fall. The Warriors are feeling the pressure to add an All-Star while the 33-year-old Curry is still dominant. It’s unlikely Thompson will be the two-way All-Star he once was prior to injury. Plus, there are serious questions as to whether Wiseman is the right fit for the Warriors’ style. Small sample size, but they were 21-12 without him.

Golden State has enough assets with two first-round draft picks (No. 7 and No .14), plus Andrew Wiggins and Wiseman, to trade for an impact player. Damian Lillard, Bradley Beal, Pascal Siakam, or Ben Simmons would instantly make the Warriors a championship threat.

Toronto was at a disadvantage before the season even started. They were forced to play their “home” games in Tampa due to Canada’s COVID-19 restrictions. Also, the Raptors were one of the hardest hit teams by the league’s health and safety protocols related to COVID. Only the Boston Celtics and Dallas Mavericks were hurt more.

A return to normal should help, because Toronto still has Pascal Siakam, Fred VanVleet, and Kyle Lowry. Plus, the Raptors own the No. 4 pick in the draft. The biggest questions surround Siakam, who had moments of inconsistency before finishing strong. It didn’t help that he lost 10-15 pounds while missing six games due to possible COVID exposure. If Toronto doesn’t trade him, Siakam’s return to All-Star form will be critical. Then, there’s Lowry, who’s 35 and on the downside of his career. His VORP (value over replacement player) rating of 1.3 was his lowest in a decade.

Perhaps no team needs an impact rookie more than Toronto. The Raptors should have a shot at Jalen Suggs, Jalen Green, or Evan Mobley. Team president Masai Ujiri, one of the most astute evaluators of talent, probably will make that critical decision. That’s assuming Ujiri doesn’t leave. He’s a free agent.

The Pacers need stability. Rick Carlisle is their third coach in as many seasons. This train wreck started last year with the surprise firing of Nate McMillan, soon after giving him a contract extension. (looks even worse now considering what he has done with the Hawks). Then the Nate Bjorkgren Experience was a disaster. His staff made more headlines for fighting/arguing with its own players. It was obvious to everyone that Bjorkgren had lost the confidence of the organization.

Indiana underachieved. A season after being the No. 4 seed, the Pacers lost in the play-in tournament. So, having a championship coach like Carlisle is an immediate upgrade. This will be his second stint as Pacers coach (2003-2007), so he knows the lay of the land.

While Carlisle ‘s methods might have run stale with the Dallas Mavericks, they should be welcome on a roster with talent. Indiana has good players in Domantas Sabonis, Malcolm Brogdon, Myles Turner, Caris LeVert, and T.J. Warren. Having LeVert healthy for an entire season should help. He missed two months due to surgery to remove a cancerous growth from his kidney.

The Hornets looked like they would suffer through another bad season. Charlotte’s preseason under/over win total was 25.5 – fourth-lowest in the Eastern Conference. But they surprised many by competing for a playoff spot. They were in contention for a No. 4 seed in April before losing in the play-in tournament.

LaMelo Ball won Rookie of The Year honors. The No. 3 overall pick immediately energized the team despite missing 19 games due to injury. Thanks to Ball, Charlotte went from last in scoring (102.9) to No. 22 (109.6). Among his noteworthy accomplishments, he had the highest player efficiency rating (17.61) among rookies last season, and the 19-year-old became the youngest player in league history to record a triple double.

Charlotte was significantly better when Ball and free-agent acquisition Gordon Hayward were both healthy. If Miles Bridges continues to develop, Charlotte can make a major jump in the East. The Hornets are a big man away from being good and might draft one with the No. 11 overall pick. The pressure will be on coach James Borrego to make the playoffs. The organization picked up his option for next season.