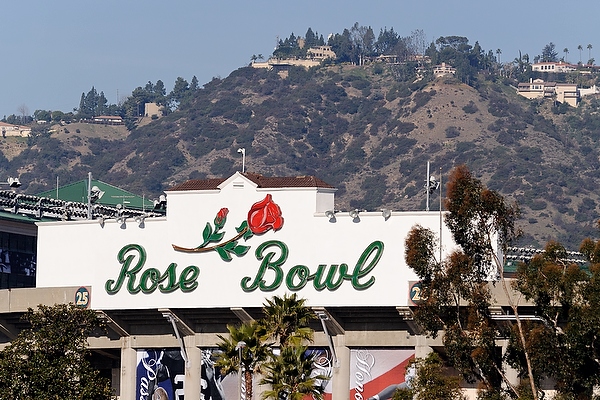 There are now 40 bowl games, up from 38, so with that we thought we’d share 40 facts for the coming postseason in college football.

First, a note. For purposes of definition, a “major bowl” means any of the Rose, Sugar or Orange Bowls in any year; any of the eight BCS National Championship Games from 2006 through 2013; the Fiesta Bowl after 1981; the Cotton Bowl in all seasons except 1996 through 2013; and the last two Peach Bowl games as part of the New Year’s Six. On to the list.

40 – There are two new games this bowl season: The Cure Bowl and the Arizona Bowl.

37 – Temple will play Toledo in the Marmot Boca Raton Bowl on December 22nd. Temple reached two bowls from 1930 through 2008.

The Owls have made three bowls the past seven seasons.

The 2008 bowl game was Lloyd Carr’s last at Michigan. The 2016 game against Florida will be Jim Harbaugh’s first bowl game as Michigan’s head coach.

34 – Michigan has won 224 more games than Florida. Yet, the Wolverines have won fewer bowl games than the Gators (21-20, Florida).

33 – Baylor and North Carolina (Russell Athletic Bowl) own this distinction:

32 – Of any bowl team with at least five bowl appearances, only Western Michigan has never won (0-5).

Ball State is not a bowl team this season, but the Cardinals are the one team worse than WMU, at 0-7.

31 – This will be the first Orange Bowl day game since the 1964 contest between Nebraska and Auburn: 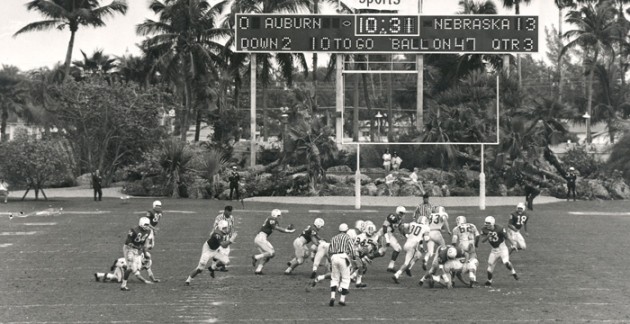 30 – The Alamo Bowl has created a top-15 matchup for the second straight season. Last year, Kansas State and UCLA both resided in the top 15. This season, TCU and Oregon both made the top 15 of the final College Football Playoff rankings.

As a point of comparison, two New Year’s Six games — the Sugar and Peach Bowls — have only one top-15 team, not two.

29 – Navy is the only service academy program with a major bowl win.

If Navy beats Army on Dec. 12, it will win 10 games for the first time since 1905. If Navy should do that, it could win 11 games in a season for the first time ever if the Midshipmen beat Pittsburgh in the Military Bowl on December 28.

27 – The number of major bowls between the Pac-12 and SEC since the 1946 Rose Bowl between Alabama and USC: 1 — the 2011 BCS National Championship Game between Oregon and Auburn.

26 – The most bowl appearances without a major bowl win: Texas Tech, 36.

North Carolina State is second with 28.

23 – North Carolina (the state, not just the Tar Heels) has the bowl blues, in a set of stats:

Duke has the 54-year bowl drought.

The University of North Carolina has appeared in 31 bowls without a major bowl win, third all-time.

21 – Northwestern has won only two bowls, outside the top 100 in college football history (including ties on the list).

The Wildcats, however, have won a major bowl game, the 1949 Rose Bowl. No other Power 5 school owns such a distinction.

Clemson is the only team to run the table in a Power 5 conference.

18 – Nebraska and Tennessee both have at least 50 bowl appearances… and neither have won a conference championship this century.

The Pac-12 is the only Power 5 league with only one NY6 team this season (champion Stanford).

16 – Ole Miss is making its first Sugar Bowl appearance under a head coach other than Johnny Vaught, who led the Rebels to eight Sugar Bowls from the 1952 through 1969 seasons (the 1953 Sugar Bowl through the 1970 Sugar Bowl).

15 – Houston is making its first major bowl appearance since the 1985 Cotton Bowl against Boston College and Doug Flutie.

Number of bowl teams with losing conference records: 13, up one from last year (12).

11 – Six schools have appeared in at least 50 bowls. Two of them produced sub-.500 seasons this year: Nebraska and Texas.

9 – The highest bowl winning percentage with a minimum of 45 bowl appearances: USC at .667.

8 – Of the top 19 schools in bowl appearances, 17 began playing college football in 1906 or earlier.

7 – Over the past 10 seasons, only Alabama (3) and Florida (2) have won multiple national championships.

Three of the teams in the 2015-2016 College Football Playoff have not won a single title in the past decade. Only Alabama can add to its recent total. Of the three other teams, Oklahoma owns the most recent national title (2000 season), and only OU has played for a national championship at another point this century.

6 – Alabama’s historical dominance put in perspective, as shown in the next cluster of details:

The Crimson Tide are appearing in their eighth Cotton Bowl (but only the seventh major Cotton Bowl, since the 2006 game doesn’t count as “major” according to our parameters). Even then, seven major Cotton Bowls puts Alabama in a tie for fourth all-time with Notre Dame.

Alabama has appeared in the fifth-most Orange Bowls, with eight.

Alabama is the all-time leader in Sugar Bowl appearances, with 15.

Alabama is (and always will be, since the event no longer exists) the all-time leader in BCS National Championship Game appearances, with three.

No other program is a top-five leader in Cotton, Orange and Sugar Bowl appearances. As for the Rose Bowl, Alabama was the last program to play in the game before the Big Ten-Pac-8 (now Pac-12) tie-in became an annual fixture in 1947. (We once again refer to the 1946 Rose Bowl between the Tide and USC.)

The historical reach of this program continues to increase.

Baylor and Michigan State have two each. Ohio State has one, and the Buckeyes finished with the best record in the Big Ten in 2012, but were not able to play for the conference title (ineligible for the postseason).

4 – Power 5 conference schools which have never appeared in a major bowl: North Carolina State, Iowa State, South Carolina, Vanderbilt, and Rutgers. (BYU is not in a conference but merits a note here.)

3 – A historical Rose Bowl update, presented in the form of several tidbits:

Arizona is the only school from the Pac-10 (formed in 1978 as an expanded version of what once was the Pac-8) which has never made the Rose Bowl.

2 – The Penn State-Georgia TaxSlayer Bowl (we would like the Gator Bowl name to return) and the USC-Wisconsin Holiday Bowl are the two bowl matchups on the 2015-2016 roster which were once 1-versus-2 bowl games.

The 1983 Sugar Bowl between Penn State and Georgia decided the 1982 national title: 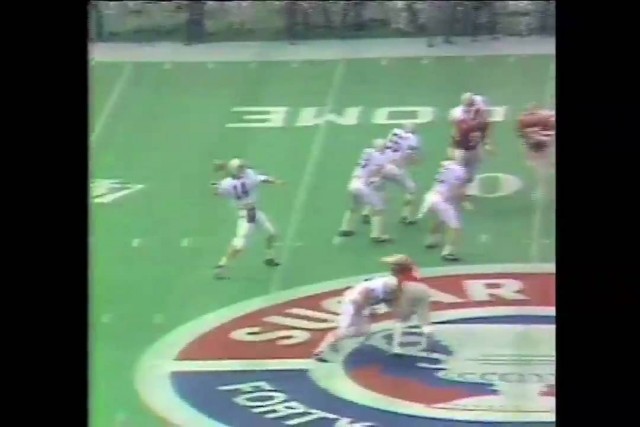 The 1963 Rose Bowl did not decide the national title (which was decided before the bowls for most of the 1960s and didn’t change in both the Associated Press and United Press International polls until the 1974 season): 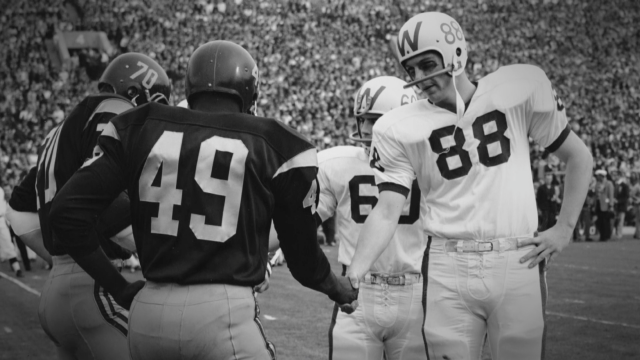 1 – The University of Oklahoma claims two big-ticket sports coaches who have distinguished themselves in unique ways. The Sooners could potentially create a dramatic college sports storyline if they manage to meet Michigan State for the national title:

Oklahoma basketball coach Lon Kruger is the only coach in Division I history to lead five different schools to the NCAA tournament.

Oklahoma football coach Bob Stoops entered the 2008 season as only the second coach in college football history (Joe Paterno being the first) to have made each of the five major bowl games (not including the Peach in the 2013 and 2014 seasons, a narrow historical window). Stoops reached the Orange, Sugar, Rose, Cotton, and Fiesta Bowls.

In that 2008 season, Stoops made the BCS National Championship Game for the first time. (Clarification: Stoops coached in previous national championship games during the BCS era, but not when the bowl game was the BCS championship game. From 1998 through 2005, the BCS title was decided in one of the four bowls: Orange, Sugar, Fiesta, Rose.) He became the first man to make the five signature bowl games plus the BCS title tilt.

Now, Stoops has become the first man to reach each of those six signature events AND the College Football Playoff semifinals. Given that the BCS era is over, Stoops will remain the only man to pull off this feat. Oklahoma therefore has a basketball coach and a football coach who have registered seminal accomplishments — one of which will never be matched.

Postscript: Oklahoma and Michigan State met in the NCAA tournament in the 2015 season. They could meet for the football national title.

PPS: Michigan State’s football-basketball head coaching pair — Mark Dantonio and Tom Izzo — is almost universally acknowledged as the best such combination in the United States. Stoops-Kruger isn’t as good, but the pair’s historical achievements exist on par with the Dantonio-Izzo axis. In many ways, Izzo and Stoops are the top-tier icons, while Dantonio is a possible legend in the making and Kruger, the “worst” of the four, still rates as one of the better coaches in his sport.