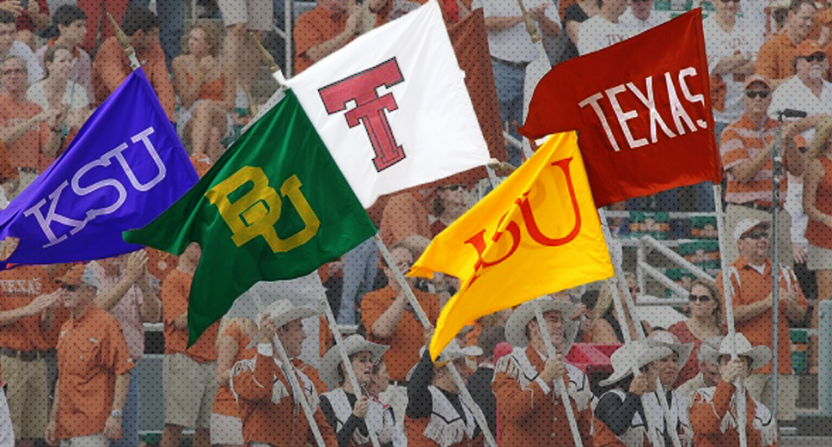 On the same day the SEC opens its nearly week-long media day extravaganza, the Big 12 will begin its two-day media day fun in Frisco, Texas. The Big 12 media day event isn’t quite the crazy scene we may see in Atlanta with the SEC, but the conference always has some talking points that will grab the headlines.

Oklahoma’s coming off a College Football Playoff appearance and must replace a No. 1 draft pick and Heisman Trophy quarterback. West Virginia is hoping their quarterback can win the Heisman and lead the Mountaineers to a Big 12 title. Iowa State could potentially be on the rise. Baylor continues to try rebuilding with a new foundation. Texas is always going to be in the spotlight. We must know the state of Mike Gundy’s hair. And Kansas is… well, Kansas.

Here’s a look at some of the storylines to follow during Big 12 media days next week. 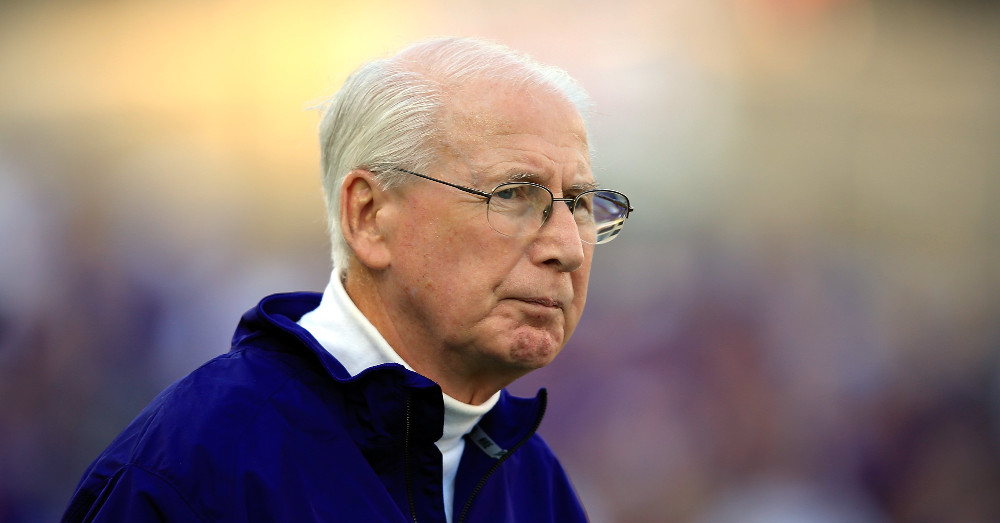 In a rare event, the Big 12 will welcome absolutely no new head coaches to the podium this year. Every coach managed to keep their job last season in the conference, but that won’t mean the hot seat talk won’t surface for a few possible coaches.

Two who stand out appear to be Kliff Kingsbury at Texas Tech and David Beaty at Kansas, although neither should be expected to be on the chopping block at the first hint of trouble. The Kansas situation is interesting because the football program has long been a struggling one, and Beaty has had a massive rebuild on his hands because of it. With a record of 3-33 in his first three seasons at Kansas, it can be difficult to defend to a new AD in place, former Arkansas AD Jeff Long. Could Long reach out to former Wisconsin and Arkansas head coach Bret Bielema to whip Kansas into shape if things turn sour once again? Maybe, although Bielema to Kansas is probably not going to happen anyway.

Kingsbury is in the sixth year of his tenure as head coach of the Red Raiders, with just one bowl victory in 2013 to show for it and now top 25 finishes. After two straight losing seasons, the idea of a coaching change in Lubbock may not be far away.

Kansas State will be worth following as well as 78-year old Bill Snyder enters his 27th year as the head coach of the Wildcats. Snyder wants to hand the program off to his son, Sean Snyder, when the time comes for him to step aside. Kansas State does not appear to be so eager to go in that direction.

Second-year Oklahoma head coach Lincoln Riley caused a bit of a stir in SEC country recently by suggesting Georgia would not have one of the top-ranked defenses in the nation if the Bulldogs played in the Big 12. Does he have a point? Perhaps, and it is even based off first-hand experience.

Here’s the full exchange between Riley and kanell from the interview. pic.twitter.com/lzXA9Pw2vS

Back on January 1 in the College Football Playoff semifinal, Baker Mayfield and Oklahoma lit up the Georgia defense for 48 points, with 531 yards of total offense in an overtime thriller at the Rose Bowl. Of course, Georgia came out on top and had the last laugh.

Expect some follow-up conversation to that particular idea, especially as it makes its way into the topic of conversation at SEC media days at the same time. That’s what media days are all about sometimes; verbal jousting between conferences. We could have a little SEC-Big 12 debate brewing on the topic of defense.

Is West Virginia equipped for a run?

There is a lot to like about the chances West Virginia has to reach the Big 12 championship game. An offense that returns seven starters, including arguably the conference’s top Heisman Trophy contender in quarterback Will Grier and a schedule that brings Oklahoma and TCU to Morgantown in November. The defense should be a solid concern, but there is a chance the Mountaineers can get by enough with their offense in the Big 12.

Getting to the conference championship game is one thing. Winning it is another. We will get a quick sense of how serious we should take West Virginia when they open the season against Tennessee in Charlotte, North Carolina in Week 1 and two weeks later playing at NC State. Those are two solid litmus tests for Dana Holgorsen’s program before jumping into the Big 12 conference slate.

The (not so great?) state of Texas

You can’t go through Big 12 media day fun without taking a look at the Texas Longhorns. I’m pretty sure that’s one of the bylaws in the Big 12. So, what about the Longhorns this season?

Year 2 with Tom Herman as the head coach and the future outlook does bring some promise down the line. But competing for a Big 12 title this season likely remains out of reach. Texas will continue to improve but Herman and his staff still have to build the roster with quality depth and develop some young players. It will happen, but it may not happen quite as quickly as some Texas fans (boosters) demand.

The offense taking steps back was a bit surprising last season, but the defense fared well. The Longhorns dropped two games in overtime (they also won one in overtime) and they gave Oklahoma a good run in the Red River Rivalry. Is Texas close to competing for a Big 12? Yes. It just may be another year before we should start taking Texas seriously in that discussion unless they really show improvement on offense this fall.

Long-term future of the Big 12

Speculating about the current state and future outlook for the Big 12 is as much a Big 12 media day tradition as anything. Not far removed from flirting with possible expansion, the Big 12 is coming off a year in which it saw its revenue reach a record amount of $364.87 million for the most recent fiscal year, which led to distributions of $36.5 million to each of the 10 Big 12 members. Only the Big Ten and SEC offered more per school, leaving the Big 12 to distribute more to its members than either the ACC and Pac-12. That figure should be expected to go up next year thanks to the addition of the new Big 12 championship game, so everything should be all good in the conference, right?

That depends. There are still some concerns about the conference moving forward as it will soon be the only power conference without its own conference-branded network; the Big Ten, SEC, and Pac-12 all have their own networks and the ACC will soon have their own network. That could potentially allow the Big 12 revenue numbers to slip behind the ACC, but if the individual distributions stay on par and continue to increase, will that ultimately matter? 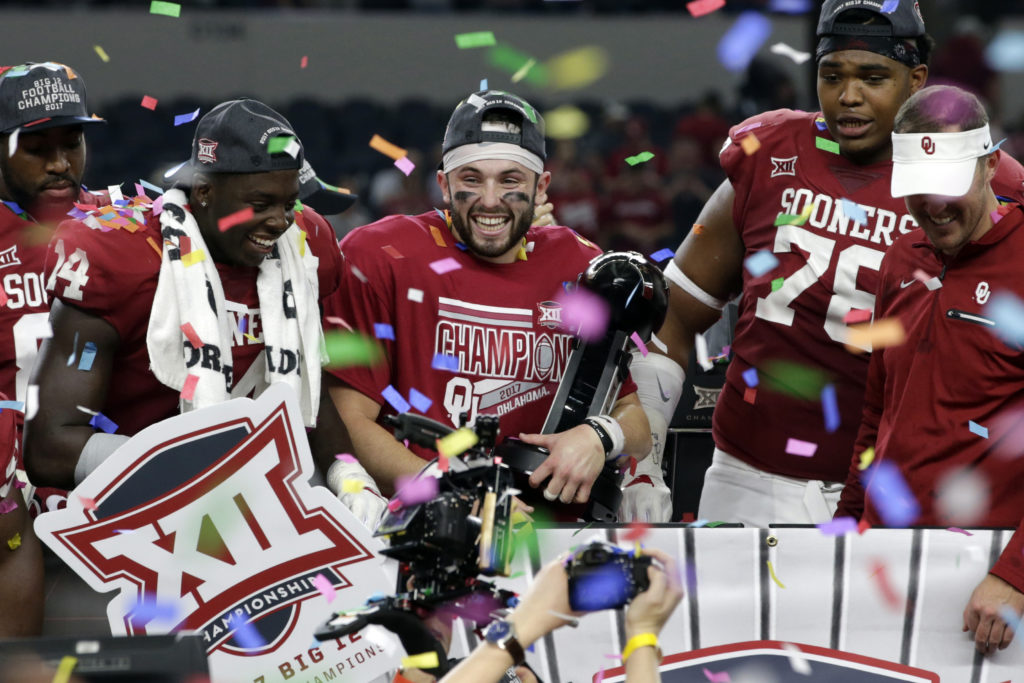 The topic of strength of schedule could also pop up. In College Football Playoff, the Big 12 has sent its champion to the four-team playoff two times in the four years it has existed, with Oklahoma representing the conference in 2015 and 2017. The addition of the Big 12 championship game was designed in part to solidify the conference’s chances of landing a team in the playoff, although it could one day be the hurdle that trips up a Big 12 playoff contender.

As it stands now, the Big 12 plays a nine-game conference schedule, a conference championship game and requires all members to play one power conference opponent in non-conference play (Oklahoma State is the lone school not playing a power conference opponent this fall, although they will play Boise State). If there is any part of the scheduling that could be enhanced to improve the overall strength of schedule, it would be to eliminate the option of playing FCS schools, but that remains highly unlikely to happen. Even the Big Ten has caved on that requirement a bit since trying to institute it in its conference.

Finally, expect the idea of expansion to once again be floated by some, but the push for expansion now appears to firmly be coming from fans and media of schools not currently in the Big 12. If the topic does surface at Big 12 media days, don’t expect anyone to take the bait.