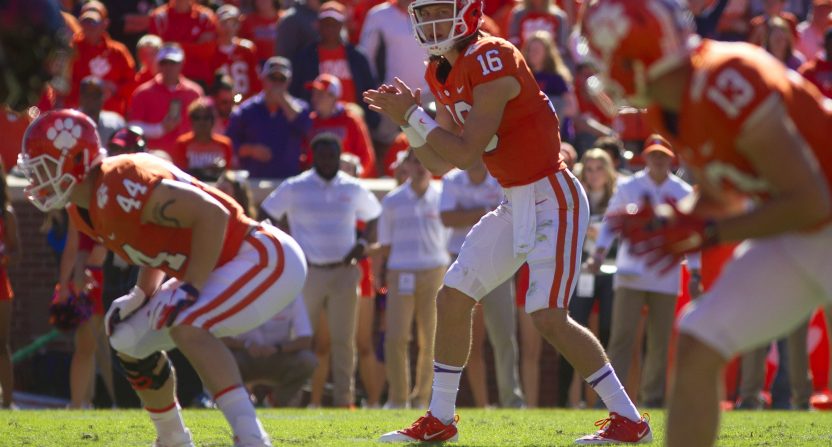 Last weekend in college football, we saw two divisions clinched in the SEC. This weekend, our first Big Ten division champion could be crowned, but it’s not a team that will be able to sniff the College Football Playoff. The Playoff picture continues to come into focus, but will any curveballs be thrown our way this weekend? Will a quarterback injury derail a team’s playoff hopes? Will either of the top two teams be challenegd by top 20 opponents? And could a familiar name play its way back into the Group of Five race to a New Years Six bowl starting this weekend?

Here is a look at what you should be paying attention to around college football this weekend.

As has regularly been the case the past few seasons, the national title chase appears to be heading toward a matchup between Alabama and Clemson. The two programs have faced each other in the College Football Playoff each of the past three seasons including back-to-back national title games and last year’s semifinal showdown. Both the Crimson Tide and Tigers are undefeated and take the top two spots in the latest College Football Playoff rankings. If both teams run the table the rest of the way this month and succeed in their conference championship games, they will be the top two teams in the playoff field.

This week, both teams are taking on top 20 opponents. Will either actually be challenged?

Of the two, Clemson has the trickier matchup on their plate with a road trip to No. 17 Boston College. College GameDay will be in Chestnut Hill this weekend as the Eagles hope to have a healthy running back AJ Dillon and quarterback Anthony Brown ready to go and give Clemson a battle in a game that could determine which team wins the ACC’s Atlantic Division. Clemson has been on cruise control lately, and Boston College is likely the biggest challenge until the playoff.

Alabama will be at home to host No. 16 Mississippi State. A week after tanking LSU 29-0 in Baton Rouge, Alabama is a significant favorite against Mississippi State. This is to be expected but is there any chance Mississippi State can force Alabama to keep their starters in the game in the fourth quarter for a second straight week? Keep in mind Mississippi State lost to LSU a few weeks ago 19-3 so I would say that is not likely.

Ian Book out for Notre Dame vs. Florida State

Notre Dame’s offense has improved considerably this season once Brian Kelly made the decision to change his starting quarterback from Brandon Wimbush to Ian Book. The Fighting Irish remain undefeated this season and have climbed to No. 3 in the latest College Football Playoff ranking and have a favorable draw this weekend at home against a Florida State team that continues to struggle to put things together. However, the Irish will have to avoid a letdown performance against the Seminoles without their starting quarterback, as Book has been ruled out for this weekend.

Book was bruised up in Notre Dame’s road win at Northwestern last week, and the injuries to his midsection will reportedly keep him out of action in Week 11. The news of Book’s expected absence this weekend has led to college football reporters tweeting out things you never could have imagined hearing in quite some time, suggesting Notre Dame should be fine this weekend but may need Book to return and be healthy when they take on Syracuse in Week 12.

Shouldn’t matter against Florida State but they definitely will need him back the following week for Syracuse https://t.co/zRBAAJVUus

Book has completed 74.5 percent of his passes for 1,824 yards and 15 touchdowns with four interceptions this season. Without Book, Notre Dame will have to hope for the best with Wimbush back at quarterback as a replacement. Wimbush started the year on a sluggish note with just one touchdown pass and four interceptions in the first two weeks of the season against Michigan and Ball State (Wimbush did rush for 59 yards against the Wolverines but was held to -7 yards against Ball State).

Should Notre Dame be concerned about not having Book this weekend against Florida State? Against the nation’s 65th-ranked defense, perhaps not so much. But we are in the nitty-gritty part of the season where Notre Dame cannot afford to slip up, and at this point there should be no game taken for granted. I don’t expect Notre Dame to lose at home against Florida State in this particular situation even without Book, but Wimbush needs to be put in a position where he won’t have to try to make something happen only to have it blow up in a disastrous way.

Playoff hopefuls on the radar

In addition to the top three teams in the latest playoff rankings mentioned above (Alabama, Clemson, Notre Dame), No. 4 Michigan has cleared a three-game run through their revenge tour against Wisconsin, Michigan State, and Penn State and now gets a chance to relax a little bit more this weekend on the road against Rutgers, with the focus shifting to a road trip to Ohio State at the end of the year.

Beyond the top four, however, there are some teams still worth keeping on your radar this weekend as they hope to avoid falling out of the picture.

No. 5 Georgia is hosting No. 24 Auburn. Auburn took down Georgia last year in the regular season and Georgia already has the SEC East wrapped up. Don’t expect a letdown performance of any kind from Georgia at this point, although Auburn has been too up and down in 2018 to suggest they have what it takes to go in and hand Georgia a playoff-elimination type of loss to the Bulldogs.

No. 6 Oklahoma is home against Oklahoma State. Never underestimate what could potentially happen in Bedlam, but Oklahoma should win this one rather comfortably. They are a 20-point favorite for a reason. No. 9 West Virginia is also home in Big 12 play against TCU, with the Horned Frogs limping to Morgantown with a record of 4-5 and seeing their bowl eligibility status skating on thin ice.

No. 10 Ohio State is also on the radar with one loss and they will take their shaky defense to East Lansing to face No. 18 Michigan State. It’s time for Ohio State to get their act together and prepare for a monster battle with Michigan at the end of the year. If the Buckeyes don’t tighten things up this week, they’ll remain far in the distance in the rear-view mirror of the playoff selection committee.

No. 8 Washington State is probably in the least ideal situation among the teams in the top 10 other than No. 7 LSU (yes, LSU is ranked higher, but we have yet to see a two-loss team make the playoff and there are a handful of teams that will be in position to pass LSU over the next few weeks). Mike Leach’s Cougars are on the road at Colorado Saturday afternoon. The Buffs could give Wazzu a battle, but the Cougs are a six-point favorite a week after winning a defensive battle with Cal. Washington State will be walking a tightrope in Boulder.

Northwestern could clinch the Big Ten West this weekend

Yes, it’s true. The Northwestern Wildcats could potentially clinch the Big Ten West Division this weekend. The Wildcats enter the weekend with a Big Ten record of 5-1, putting them one game ahead of both Wisconsin and Purdue and two games in front of Iowa. Northwestern already owns head-to-head tiebreakers with the Badgers and Boilermakers this season. Here’s Northwestern’s Big Ten West-clinching scenario for this weekend:

Northwestern would clinch the Big Ten West with all three of these results g because the worst-case scenario becomes Northwestern ends the year in a three-way tie with Wisconsin and Purdue, and winning head-to-head tiebreakers would favor the Wildcats.

The good news for Northwestern fans is even if the Wildcats don’t manage to clinch the division this weekend, the remaining schedule consists of two games, at Minnesota and home against Illinois. For Northwestern not to win the Big Ten West at this point would be quite a shock.

Boise State still a factor in the Group of Five race?

UCF continues to do their thing as the only unbeaten team left among the Group of Five programs, and as long as the Knights continue to win, they will be the team heading to a New Years Six bowl game this season. The Mountain West Conference is still looking to have its champion wiggle into the big bowl lineup in the event UCF does take a fall somewhere between now and the end of the regular season. Fresno State is the only other Group of Five program currently ranked by the selection committee, and Utah State is right on the same level even if they are not getting the same respect.

And then there is Boise State. The Broncos have been easy to forget about for most casual fans who pay attention to the Group of Five New Years Six picture, but Boise State still figures to play a prominent role in the Mountain West Conference’s chances. That is because Boise State will host Fresno State Friday night and the Broncos also host Utah State in the regular season finale. Boise State also has a favorable history when playing at home against both Fresno State and Utah State since moving up to the FBS.

If Fresno State and Utah State are going to remain on the heels of UCF this month, they will each have to buck the trends when playing at Boise State. Otherwise, it may not be too much of a reach to suggest Boise State could pop up on the New Years Six radar in the final weeks of the season.