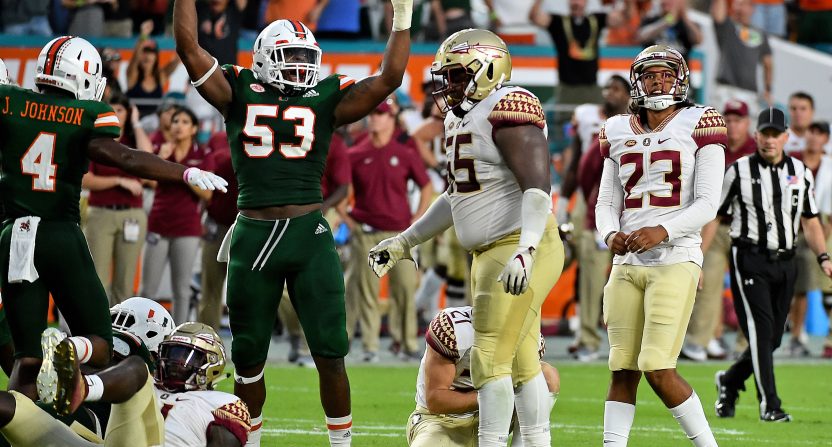 Up until midway through the third quarter of Saturday’s game in Miami, it looked as though Florida State was going to hand their rivals from Miami a bit of an embarrassing loss. But after three unanswered Miami touchdowns and miscues by Florida State, it was the Hurricanes who had the last laugh.

Poking some fun at their freshly defeated opponents from Tallahassee, two Miami Twitter accounts fired some not-so-veiled shots after a thrilling 28-27 victory. The main Miami athletics Twitter account took inspiration from the motto Florida State is embracing this season (Do Something) with this good-humored piece of art…

Miami should be all smiles after this one. For the first time since winning six consecutive meetings from 2000 through 2004, when Miami was a member of the Big East (with the exception of their 2004 regular season meeting, Miami’s first as a member of the ACC), the Hurricanes have won consecutive games in the series. After snapping their seven-game losing streak to Florida State last year, that’s a nice step forward for Mark Richt and his program. Improving to 5-1 on the season with a fifth-straight win and dropping Florida State back to .500 at 3-3, and putting some pressure on Willie Taggart to just get Florida State into a bowl game, is pretty much the cherry on top.

As can commonly be seen around college football, Florida State was simply not equipped to close the door on their opponent and thus failed to capture an upset victory. After taking what seemed like a decisive 27-7 lead early in the third quarter thanks to a punt return for a touchdown, Florida State imploded. The Seminoles fumbled the football away on their first offensive touchdown since the punt return, giving Miami a short 20-yard field and leading to a quick Miami touchdown. Florida State’s next drive ended abruptly with an interception thrown by Deondre Francois. Again, Miami started inside the red zone and needed just one play to cut the Florida State lead to just six points, 27-21.

After the teams exchanged punts, Florida State kicker Ricky Aguayo missed a 43-yard field goal, and Miami needed just four plays to go 75 yards for a go-ahead (and eventually the game-winning) touchdown. N’Kosi Perry completed a 32-yard pass on third down and followed that up with a 41-yard touchdown pass to Brevin Jordan. Once again, the offense sputtered as Miami’s defense was on fire. A three-and-out forced Florida State to punt the ball away and the Noles were unable to cover up a fumble on the return. Florida State’s offense returned to the field two more times and went three-and-out each time. Miami then milked the final four minutes of the game to wrap up the win.

As mentioned last week, Miami continues to look like the best team the ACC Coastal Division has to offer, and the schedule offers Miami a favorable path that’s being paved for a return trip to the ACC Championship Game. This game could serve as a wakeup call to Richt’s players that no game can be taken for granted, or a messy start can simply be chalked up to the rivalry aspect. Miami now takes to the road for two games, first at Virginia and then at Boston College. Both games could pose some possible hurdles, with the Cavaliers giving Miami a good run last year and Boston College a viable threat if running back AJ Dillon is healthy.

It’s going to take some time for Miami to climb their way back into the playoff conversation, but they have the luxury of having some winnable games in front of them that can allow pieces to fall into place. And in the meantime, they will smile knowing they are currently in a much better situation than Florida State for the foreseeable future.

1 thought on “After Miami scored 21-unanswered points to beat FSU, Hurricanes took to Twitter for pile-on”