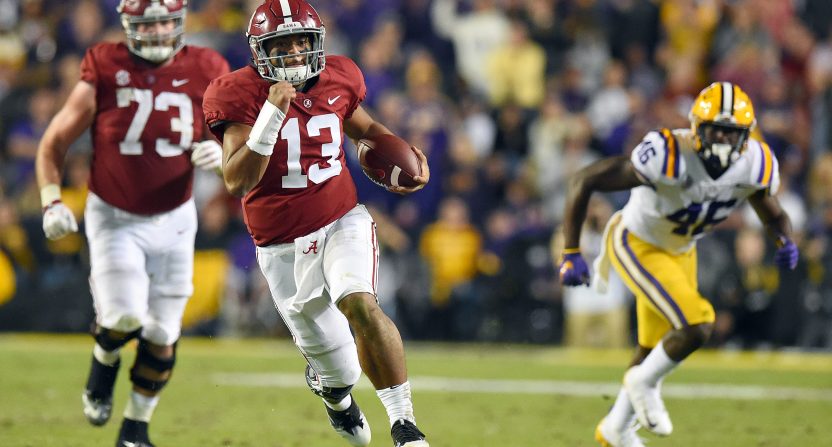 That’s the question that is on everyone’s minds after watching the Crimson Tide take LSU, the #3 ranked team in the country, to the woodshed on their home field with a 29-0 victory. What once was the premier game on the college football calendar (and even the national championship matchup after the 2011 season) has turned into a completely one-sided affair. Alabama has defeated LSU in eight consecutive games and LSU hasn’t even scored against Alabama at home since 2014.

Yes, Alabama has been the preeminent dynasty in college football over the last decade, winning five out of the last nine national championships. But something seems different this year with how absurdly dominant Alabama has been compared to the rest of the competition. For as much hype as the LSU game received, it wasn’t even close. They have the unquestioned #1 team in the country and the Heisman frontrunner, QB Tua Tagovailoa, just took his first snaps of the season in the fourth quarter in November. Through six SEC games, Alabama’s winning margin is an ungodly 34.7 points per game in what’s supposed to be the toughest conference in the country. We’ve always wondered what Alabama would look like if they had a Heisman-caliber quarterback and now we know – it is frightening.

If you’re a fan of college football somewhere outside Tuscaloosa, though, it’s probably not too much fun knowing the outcome of this season is pretty much decided. Even if Alabama were to shockingly lose a game this season, they’ll get a pass into the playoff based on reputation alone. It’s what we saw last year, and the Tide still won the national championship in spite of not even qualifying for the SEC Championship Game. Is that dominance going to turn fans around the country away and lead them to tune out of a season-long Alabama coronation?

To date, that hasn’t happened yet. In fact, Alabama’s victory over LSU was the highest-rated game of the 2018 regular season, pulling in a 6.7 rating, besting any other marquee primetime matchup that preceded it. Given the nature of the game and how non-competitive it was, that may be surprising. The fact that it beat even a hotly contested Ohio State-Penn State game that went down to the wire shows that the Alabama-LSU game was a huge draw. In fact, the overnights for the contest were the best for an Alabama-LSU game going all the way back to 2013. And according to Sports Media Watch’s database for viewership numbers, it’s the only game to cross the 10 million viewer mark this season so far.

What about when we get to the business end of the season? Alabama certainly hasn’t been bad for ratings, given that last year’s championship game drew over 28 million viewers in an all-SEC matchup against Georgia. To show how things are in fact trending in the right direction, that number was four million viewers higher than the previous all-SEC matchup against LSU. While none of Alabama’s games have reached the heights of the first playoff title game between Ohio State and Oregon, it’s not like ratings have fallen off a cliff either.

And really, there’s no empirical evidence that dynasties are necessarily “bad” for a particular sport in the ratings. Look no further than the most significant dynasty in modern sports – Michael Jordan’s Chicago Bulls – for the evidence of that. The NBA still hasn’t reached the heights of Jordan’s Bulls and the ratings they were able to pull in. Similarly, nobody in their right mind would say that the Patriots’ dynasty has been directly a bad influence on NFL ratings.

So where does the talk of the negative impact of dynasties come from? Well, for every positive example you could find there’s a negative counterpart. The San Antonio Spurs won five NBA championships with Tim Duncan as their star man and never were able to pull in a big number for the NBA Finals. It was actually quite the opposite, as the Spurs featured in the only two NBA Finals series to average less than 10 million viewers.

Another example might be NASCAR. Jimmie Johnson tied the hallowed record of Richard Petty by winning seven NASCAR championships between 2006-2016, including five in a row from 2006-2010. When Johnson was just stepping into the spotlight, NASCAR was riding an incredible wave of national momentum. Now the sport is reaching seemingly a new low every single week. Of course it’s not Johnson’s fault that NASCAR has some extremely difficult challenges to deal with, but the lack of drama and rivalry and competition for a number of years certainly didn’t help.

Quite honestly, the subject of the dynasty and whether it does harm or good for a sport has to be viewed on a case by case basis. And in the case of Alabama, right now it has to be said that is doing more good than harm. It helps college football that this is one of the traditional giants of the sport that is at the top with a huge fanbase in the sport’s heartland of the southern United States. The same probably wouldn’t be true if we were talking about an Oklahoma State or Boston College or Utah football dynasty.

If Alabama wins another six or seven consecutive championships, perhaps things will be different and eventually even the biggest college football diehards will grow weary. But right now, Alabama and Tua are a huge draw for the sport and it doesn’t look like changing anytime soon.

5 thoughts on “Alabama’s dominance isn’t bad for college football…at least, not yet”