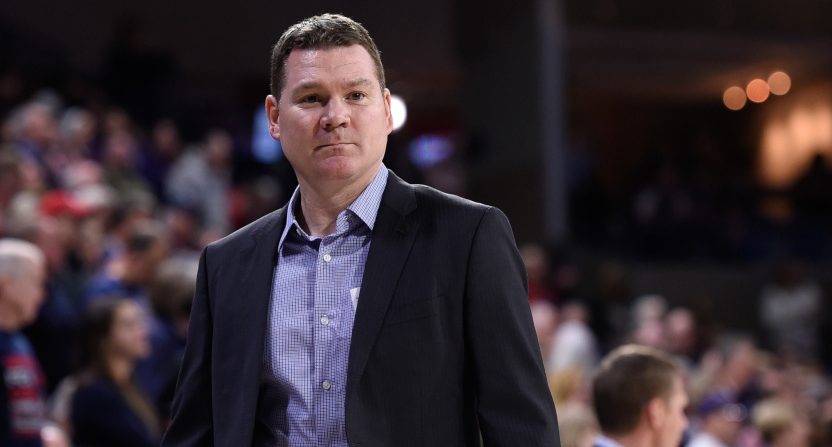 A week after parting ways with men’s basketball head coach Sean Miller, the Arizona Wildcats have found his replacement. As per Jeff Goodman of Stadium, they’ve chosen Gonzaga Bulldogs associate head coach Tommy Lloyd (seen above during a Feb. 27, 2020 game):

HUGE upside. Terrific recruiter, has had major coaching responsibilities with Mark Few, and helped build the Zags program into what it is.

Here’s more on this move from Goodman’s piece:

Gonzaga has been one of the best programs in the country the last couple of years, and if Mark Few has been the program’s Batman, Lloyd has been its Robin.

…Lloyd, 46, has been an assistant coach under Few for the past two decades and is best-known as arguably the premier international recruiter in college basketball. But that’s selling him short. He’s far more than just a guy who can cross the border and bring back talent.

Sure, Lloyd has lured guys like Domantas Sabonis, Kevin Pangos, Kelly Olynyk, Killian Tillie, Rui Hachimura and Joel Ayayi to Spokane. But he’s also crushed it on the transfer market, landing Brandon Clarke (San Jose State), Kyle Wiltjer (Kentucky), and Andrew Nembhard (Florida), and has been able to land top high school players such as incoming freshman guard Hunter Sallis — the Omaha native who is ranked in the top 10 nationally.

And Lloyd has taken on a ton of the coaching responsibilities over the years. All you need to do is talk to any of the former players, or watch a game, to see how involved he is in the X’s and O’s.

“He looks at the game differently than almost any coach I’ve been around in his attention to detail and how to implement his philosophies, especially with player development,” said former Zags standout Dan Dickau, now a national television analyst. “His ability to evaluate and recruit and blend international talent has really helped Gonzaga become what it has become.”

Lloyd, 46, has been coaching at Gonzaga in one role or another since 2000, starting there as a volunteer administrative assistant in 2000. That was current head coach Mark Few’s first season at the helm, and as per an ESPN piece from Jeff Borzello last year, Lloyd actually got there thanks to a promise made by previous head coach Dan Monson (who left Gonzaga for Minnesota following a 1999 run to the Elite Eight). Few honored that promise, and it worked out very well for him; Lloyd did well in that role (which covered everything from film exchange to camps and beyond) and was hired as a full-time assistant the next year, and he’d go on to become one of the most important parts of the Gonzaga program, especially with leading their international recruiting. The Bulldogs even actually wrote into Lloyd’s contract that he’d be Gonzaga’s next coach after Few (as per Borzello):

It’s a topic that has come up within the industry when the coaching carousel kicks off every March: Why hasn’t Tommy Lloyd landed a head-coaching job? Why is he still at Gonzaga? Despite routinely torching schools in the Pac-12 and certainly the WCC with a recruiting network as rich as that of any coach in Division I, Lloyd has never even gone to another campus for a job interview.

There are a few reasons — and one can be answered by two other people who often get asked the second question: Few and athletic director Mike Roth.

“It’s not that he hasn’t had an interview,” said Roth, who added that Lloyd’s compensation already eliminates most potential head-coaching jobs. “He’s declined them.”

“He’s got a guarantee to be the next head coach here, so that’s pretty strong,” Few said.

It’s more than a verbal guarantee, though, more than some sort of handshake agreement. Lloyd has it written into his contract that he’s the next head coach at Gonzaga, whenever Few decides to retire.

It’s sort of fascinating to see Lloyd moving on from Gonzaga after so many years of declining jobs elsewhere. But the Arizona job is quite a prominent one, and while there is uncertainty there about potential NCAA sanctions, a Power Five coaching job offer for someone who hasn’t actually been a head coach before seems hard to pass up. (And it’s a Power Five school with a history of basketball success; the Wildcats won the NCAA tournament in 1997, were runners-up in 2001, and have made four Final Four and 12 Elite Eight appearances, with their last two Elite Eight appearances coming in 2014 and 2015.) And Few is only 58 himself, and he just led Gonzaga to a NCAA tournament runner-up finish, so it doesn’t seem like he’s moving on any time soon. So this may have been the right time for Lloyd to jump.

It will be interesting to see how Lloyd does at Arizona. Some coaches without previous Division I head coaching experience have done quite well recently at big programs, including Juwan Howard at Michigan (who reached the Elite Eight this year), but that transition’s been more frequently made by people who were famed players. For those whose background is in assistant coaching, a more typical path has been starting at a mid-major and then jumping to a Power Five head job. But Lloyd certainly has a long history in coaching at a top program, and he has a lot of recruiting connections. We’ll see what he can do with the Wildcats.