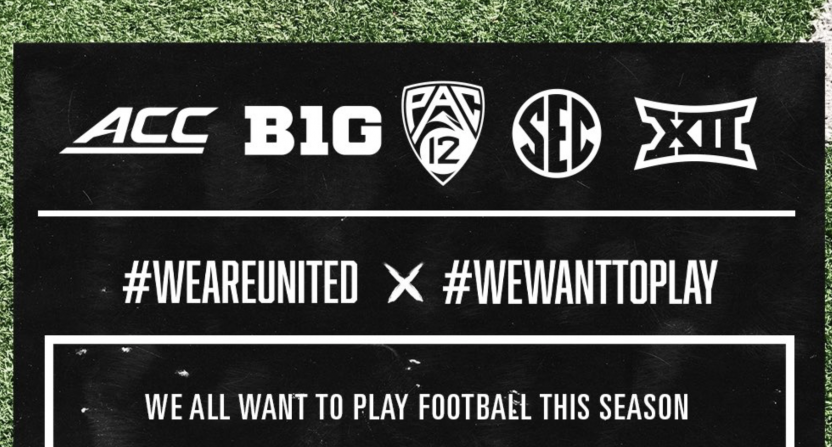 College sports, and specifically college football, is stepping into an unknown whether people like it or not. The immediate future of college football is murky depending on the conference and that unknown has players organizing to protect themselves.

The Power Five conferences have had internal meetings to figure out what to do with the college football season, especially after the MAC canceled their season. The season is expected to start at the end of the month but the COVID-19 pandemic is getting worse and worse by the day that some top conferences are expected to not play in the fall.

According to Dan Patrick, he revealed on his show a source told him that the “Big Ten and Pac-12 will cancel their football seasons tomorrow.” The ACC and Big 12 are “on the fence” about whether or not they’ll press on and the SEC are looking to add other schools and possibly have their own season. In the Big Ten, Patrick reported that all the school presidents other than Nebraska and Iowa have voted against playing college football in the fall.

DP was told an hour ago that the Big 10 and Pac 12 will cancel their football seasons tomorrow… The ACC and the Big 12 are on the fence.. And the SEC is trying to get teams to join them for a season.

While the Power Five figure that out, the players are looking out for themselves. As Pac-12 athletes launched the “We Are United” campaign last week, college athletes from the other conferences launched the “We Want To Play” campaign with similar demands as We Are United. In fact both have teamed up to become one and many prominent athletes, including Clemson QB Trevor Lawrence posted this tweet at midnight Monday.

They make it a point that many players want to have a college football season, but have a college football season in the safest possible manner. That comes with work that everyone must do. Whether it’s people wearing masks or having universal protocols that are followed in all schools, it’s going to take work to have a season and we’ll need to earn our season. We’re not, and should not get it just because it’s the fall and that’s when we have football.

In addition, while many want to play, the players realize some may not want to for a variety of reasons. That’s where they want the option for players to opt out and have an eligibility waiver. That won’t stop some fans from not respecting someone’s decision but that’s what they want from the schools.

One of the last, and probably most important demands of the We Want To Play campaign is the ability to create a “College Football Players Association.” The NCAA have done a good job keeping “student athletes” disorganized mainly because the athletes are only there for a short period of time and, for college football and basketball, it’s still the best option to make the pros and they don’t want to be blackballed, but this is a different situation.

The landscape is so bleak, in an on-field situation, that college athletes don’t really have much to lose right now. The fear of being blackballed goes away if no one’s playing and if they are playing and risking their health, they’re going to want something out of that. Right now, it’s assurances that they’ll be as safe as possible but everyone knows the endgame will be some sort of compensation.

The NCAA is obviously going to fight that, just like they have done for years; but while they’re at their weakest, the players are shooting their shot to ultimately get the thing many have been seeking over the years. The current players might graduate by the time players are compensated but while they’re fighting for health and safety protocols, future classes will surely take the path that’s potentially created in order to get paid.