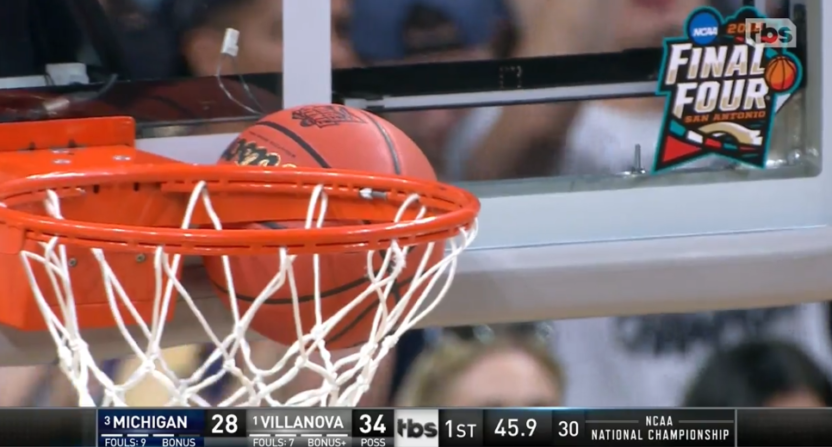 Sophomore guard Donte DiVincenzo is having quite the night for the Villanova Wildcats in the NCAA men’s basketball championship game against the Michigan Wolverines Monday. DiVincenzo, the Big East sixth man of the year, scored 18 of the Wildcats’ first 32 points and propelled them to a 37-28 halftime lead. And he also contributed to one of the weirder plays of the game, blocking a shot and getting it stuck on the rim, then trying to clear it with his other hand unsuccessfully:

That’s an interesting play, and an unusual one. It’s a great effort by DiVicenzo to fly back to the ball and block Zavier Simpson’s layup from behind without committing a foul, and although the first block gets stuck on the rim, the second attempt to pull it down shows some quick thinking on his part. It doesn’t quite work, but the Wildcats had the possession arrow at the time, so they still wound up with the ball as a result of this. And it was just part of an amazing first half for DiVicenzo, who shot seven for 10 from the field (three for four from deep), and even inspired a “Donte’s Inferno” graphic from TBS:

Not bad, not bad at all. And Villanova’s 11-0 all-time when DiVicenzo scores 18 or more? That’s a pretty good omen for the Wildcats. The stuck ball might still wind up as one of the weirder moments of the night, though.