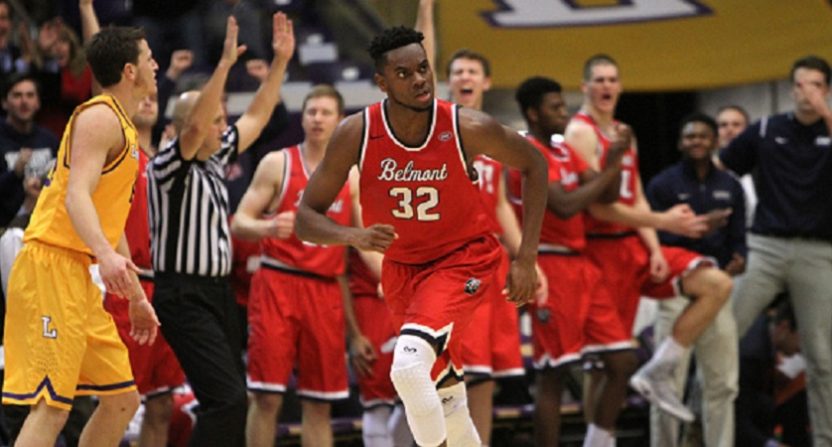 For nearly a week, ESPN was telling you about the monumental Wednesday night of college basketball they had planned for viewers. Four hall of fame ACC coaches, four stunningly consistent programs (Duke, Louisville, North Carolina, Syracuse) and a ratings bonanza for mid-week hoops.

Elsewhere, it’s easy to get caught up in the consistency of Kansas, Michigan State, Gonzaga, Wisconsin or even VCU.

But a name that’s regularly left off the list is the Belmont Bruins, who have risen through the ranks with Coach Rick Byrd and are now a perennial 20-win team and Ohio Valley Conference power. They’re likely to make their eighth NCAA Tournament in 12 years next month, if they can get through the conference tournament unscathed.

Byrd took over an also-ran NAIA program in 1986, and gradually grew with them into a low-major power. In the NAIA, they made the postseason in nine of his first 10 years, and won at least 27 games in five of those. After two straight trips to the NAIA semifinals, the Bruins moved up to Division I as an independent in 1996.

While Byrd and Belmont struggled for some even footing there (understandable considering the difficulties of DI basketball independence), they figured things out quickly once they joined the Atlantic Sun. The Bruins finished first in their division by year two, made the NIT in year three and in 2006, the school made its first NCAA Tournament.

Ever since, Belmont has just been chugging along and winning basketball games at an impressive clip of more than 23 per season. They followed that initial NCAA berth up with two more in a row. Two years later, they had their first 30-win season as a DI program. That team earned a 13-seed on the back of its 19-1 conference record. It also helped propel them to the Ohio Valley in 2012.

Belmont has dominated similarly in the OVC, and this season’s no different. The Bruins are already 21-5 with one regular season game remaining vs. Tennessee State. They’ve already clinched the East Division crown and have the best league record by four-and-a-half games, at 14-1. SB Nation has them projected as a 14-seed against Kentucky, which provides some regional intrigue, if nothing else. An upset over John Calipari’s Wildcats would be a long shot, but one that could propel the program to even greater heights were it to transpire. (The Comeback’s Jesse Kramer puts them as a 13-seed against UCLA in his bracket projections for a Bruins-on-Bruins matchup.)

For a rapid riser like Belmont, the recent four-year stay of dominance in the Ohio Valley seems like a plateau. Consistency, while notable, doesn’t earn the same acclaim as growing success.

Once “small-time” programs like Gonzaga, VCU, Wichita State, Xavier, Butler and Creighton were slow builds to consistency, then big upsets and the riches that came with it. Others like Bucknell, Bradley, Vermont and others have just sort of sat in place (which works too). Even George Mason, the ultimate Final Four party crasher, didn’t see an improved station in life after their magical tourney run.

So Belmont takes a different road than all of those, it would appear.

Evan Bradds with the Slam AND the Foul! pic.twitter.com/7wWF94vorf

Located in Nashville, there isn’t a ton of basketball talent in the nearby area (most of Tennessee’s best prep stars hail from Chattanooga or Memphis, and head to bigger programs than the Bruins). Belmont is a small, private, liberal arts school of just over 7,000 undergrads. The fact that they’ve been able to progress this far in the shadow of Vanderbilt in their own city shows the school and basketball program’s collective steely resolve.

Byrd doesn’t pull in blue-chip talent. He rarely even gets three-star players. Since 2014, the only three-stars (per 247 Sports) to commit have been Amanze Egekeze and Mack Mercer. Current leading scorer Evan Bradds was a two-star recruit with zero real interest from power conference schools. He’s averaging 20.7 points per game, which is tied for the 22nd-best figure in the country.

Belmont is a team stacked with upperclassmen because at most schools not named Kentucky, that’s still how it works. Even the Dukes and Syracuses and Louisvilles of the world need a base of three- and four-year guys to help steady the ship, despite the influx of one-and-done players.

But while power conference teams have four-year guys who are elite prospects, the Bruins just have players with promise, and a coach who seems to be able to get the most out of them.

Byrd has won 665 games at Belmont and 362 of those have come at the DI level. He’s never needed to be in possession of elite players. This year’s no different as his team eyes that elusive NCAA Tournament victory.

With the right matchup, however, this could be it. Bradds is shooting 63 percent on the year, and averages nearly nine rebounds per game. Senior Taylor Barnette and the aforementioned junior Egekeze average a combined 23 points per. According to KenPom.com, Belmont is the most efficient two-point shooting team in the country at 62.2 percent. They’re also seventh in effective field goal percentage, at 56.7.

All of that efficiency aside, this team chucks threes – the hallmark of many a first round upsetter. Five Bruins players have attempted 75 or more three-point shots. Nick Smith’s hit the highest percentage of them at 44.4. A whopping 39 percent of all of Belmont’s points have come from three-pointers (ninth-highest rate in DI). Sure, opponents can sell out on the perimeter, but then you’ll get victimized by the highly efficient Bradds inside.

Belmont may go without a tournament win yet again this year, but that doesn’t mean they aren’t a successful program. Few can claim the year-to-year winning ways the Bruins have displayed under Byrd – even the bluest of bluebloods fall short of 20 wins now and again.

The Bruins are consistent. Now we wait to see if consistent can evolve into excellent.