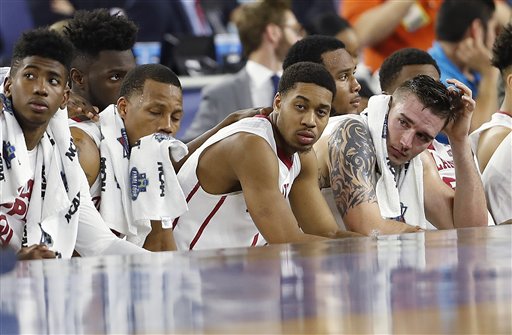 Previously, the Final Four National Semifinal games had DirecTV. The one we just watched this past Saturday in Houston? It had cable.

Jokes aside (and goodness, there was plenty of time to make them during two blowouts), the 2016 Final Four easily made the short list of worst semifinal doubleheaders of all time. It is tempting to make an all-time list in this piece, but let’s be fair: It is hard to judge the 1944 national semifinal — Utah 40, Iowa State 31 — by the same standards of today.

Without dumping on players from generations past, a reasonable and not-too-arbitrary line of demarcation for evaluating Final Four semifinal doubleheaders is 1979. First, the NCAA tournament began to be seeded that year. Second, the field expanded from 32 teams to 40. That was followed in 1980 by additional expansion to 48, on the road to 53 teams in 1984 and then 64 in 1985.

What also occurred at that point in NCAA tournament history (the late 1970s) was that the top seeds in a given region no longer played the teams confined to that particular region. John Wooden’s UCLA teams played Long Beach State, San Francisco, and Arizona State (among others) in regional finals. In 1979 and beyond, Pac-10 teams played out-of-region teams if kept as a high seed in the West Regional. Accordingly, the Final Four bracket matched winners of regionals who had played non-region teams, creating a more genuinely national tournament.

We now present the five worst semifinal doubleheaders at the Final Four since 1979:

No. 5 – 2005: Illinois over Louisville, North Carolina over Michigan State 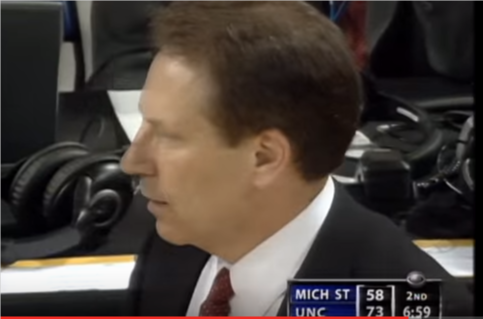 One of the more shocking aspects of a duller-than-expected Saturday at the 2005 Final Four was that the two losing coaches were Rick Pitino and Tom Izzo. Roy Williams might win a third national title on Monday night, but Pitino — who took two detours away from the college game in his coaching journey — has probably produced the more impressive career, making the Final Four at three different schools and winning the national title at two different programs.

The first semifinal between Pitino’s Louisville team and the great 2005 Illinois squad was still somewhat close heading into the final four minutes… but not close enough to create a riveting finish. Louisville played 75 percent of a game, but not the full 40 minutes. The Cardinals scored just eight points in the final 10:22.

The second semifinal — usually expected to be the game which carries the day if the first semifinal falls flat — was a total dud over the final 12 minutes. North Carolina broke open a close game with a big run and Michigan State never answered. 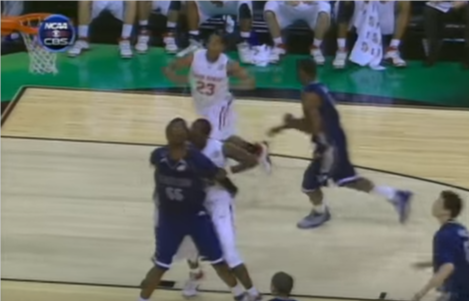 The 2007 Final Four didn’t feature the worst pair of national semifinals in modern times. But much like the 2008 Final Four, it might have been the biggest letdown compared to the hype which accompanied the event.

What you see above is Georgetown’s Roy Hibbert picking up a cheap foul (on a suspect whistle) in his duel with Ohio State’s Greg Oden. Everyone wanted to see those guys play, but the officials called touch fouls on both men all game. The contest was close and interesting, but fans (rightly) felt jobbed.

In a rematch of the previous year’s national title game (which was a dud), Florida once again strolled past UCLA in a drama-free second semifinal. Those two Final Fours almost made this list. 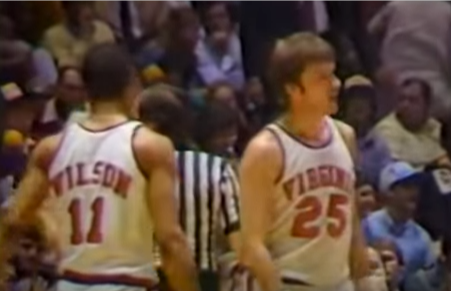 The national semifinal we almost had this year — North Carolina versus Virginia — came to pass in 1981. This had the makings of a classic in Philadelphia. UNC and UVA both had the capacity to play above the rim. The Tar Heels put James Worthy and Sam Perkins on the floor, while Virginia countered with Ralph Sampson, in what turned out to be his only Final Four in Charlottesville.

As is the case with the other Final Four doubleheaders on this list, one game was completely awful in 1981, while the other one was good for 28 to 32 minutes, only to evaporate into a bore down the stretch. The LSU-Indiana first semifinal was a wipeout in favor of the Hoosiers, and UNC-UVA became the 75-percent game with a flat closing stretch. At a time when there was no shot clock or three-point shot, North Carolina established a healthy margin of eight to 10 points and steadily nursed it over the final minutes without a stirring Virginia rally. The 1981 Final Four — NBC’s last before the handover to CBS — rates as one of the all-time worst Final Fours, because Monday’s title game (overshadowed by the assassination attempt on President Ronald Reagan) was not particularly close, either. Indiana beat Carolina by 13.

No. 3 – 2000: Michigan State over Wisconsin, Florida over North Carolina 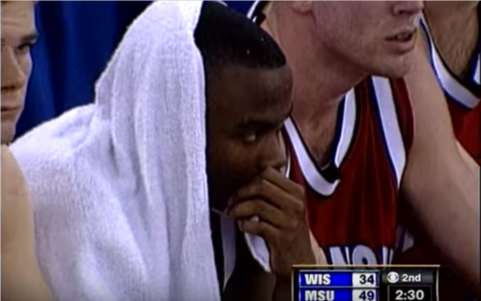 Just look at that score in the screengrabbed image to the left.

If you remember watching the first semifinal at the 2000 Final Four, you remember wanting to poke out your eyes… or just do laundry instead of sit through the brickfest Michigan State and (especially) Wisconsin gave to a traumatized national audience. Consider this about that “34” score for Wisconsin: The Badgers’ second half was better than their first. UW scored only 17 points in the entire first half. Michigan State scored only 19 points in the first 20 minutes… and LED at the intermission.

The second semifinal was somewhat interesting, but much like Louisville-Illinois 2005 and UNC-Virginia 1981, the game died in the last several minutes. North Carolina scored just six points in the final 10:13. A moderately close game was not enough to save National Semifinal Saturday — not when the other game was the single worst semifinal in Final Four history.

No. 2 – 2016: Villanova over Oklahoma, North Carolina over Syracuse 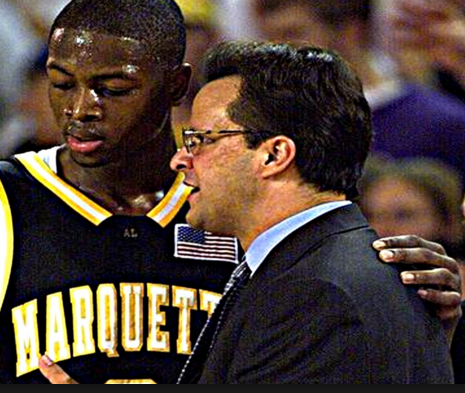 See that image to the left? That’s a much younger Tom Crean with Dwyane Wade of Marquette at the 2003 Final Four. The last national semifinal to be decided by more than 30 points was Marquette’s 94-61 loss to Kansas in New Orleans.

Villanova’s 95-51 win over Oklahoma (side note: 2000 Michigan State scored two more points than 2016 Oklahoma in the national semifinals) topped Marquette-Kansas and 1979’s Michigan State blowout of ninth-seeded Penn (101-67) as the biggest semifinal margin of all time. The 44-point spread is the biggest in Final Four history. Bill Bradley scored 58 points to lead Princeton to a 36-point win over Wichita State, but that was not a semifinal; it was the 1965 third-place game.

Villanova-OU was supposedly the better matchup of the two. That’s because the second semifinal played out the way many feared (or in Chapel Hill, hoped) it would. Syracuse, though, made that game a little interesting with its 10-point run after trailing by 17. That small bread crumb of intrigue prevents 2016 from having the worst pair of national semifinals in modern times. The, uh, “winner” is this next loser of a Final Four: 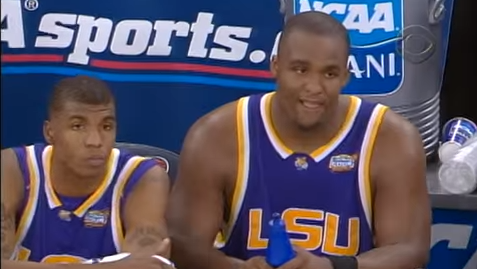 Don’t blame the Florida Gators and Billy Donovan for being locked in on defense each time they reached the Final Four.

Florida made four Final Fours under Donovan, and in four national semifinals — three wins, one loss — the Gators never allowed more than 66 points in a game. The 66 came largely due to UCLA filling up on garbage-time points in a 2007 semifinal drubbing. Florida led that game, 49-32, with 12:34 left.

In 2006, Florida played almost as well on defense against George Mason (due to 2007 UCLA having far better talent than 2006’s Cinderella). The score with 12:36 left was 47-30, Gators. That game never became remotely interesting.

Florida is the team which crushed the little guys in NCAA tournaments over the years. The Gators handled George Mason 10 years ago. They stopped Florida Gulf Coast’s run in 2013. They beat Norfolk State after the MEAC champions pulled off a 15-over-2-seed upset in 2012. Florida was a rock in NCAA tournaments in the Donovan era… but it made for lopsided games, including Final Four semifinals.

In the second game from 2006, LSU’s Glen “Big Baby” Davis endured a nightmare… as did TV viewers and CBS executives. Davis and LSU slogged through a completely detached and disjointed performance. UCLA’s letter-perfect defensive rotations and structured offense built a 55-31 lead with 10:16 left.

If you look through Final Four history since 1979, at least one semifinal rose to an appreciable height, or both semifinals managed to be at least somewhat interesting inside the final six minutes of regulation. In the five doubleheaders mentioned above, at least one game was a total clunker, and the other game failed to save it.

Of the five semifinal Saturdays on this list, though, Syracuse’s brief rally on Saturday enables 2006 to remain the clear No. 1… on a list where No. 1 is an unwelcome distinction.