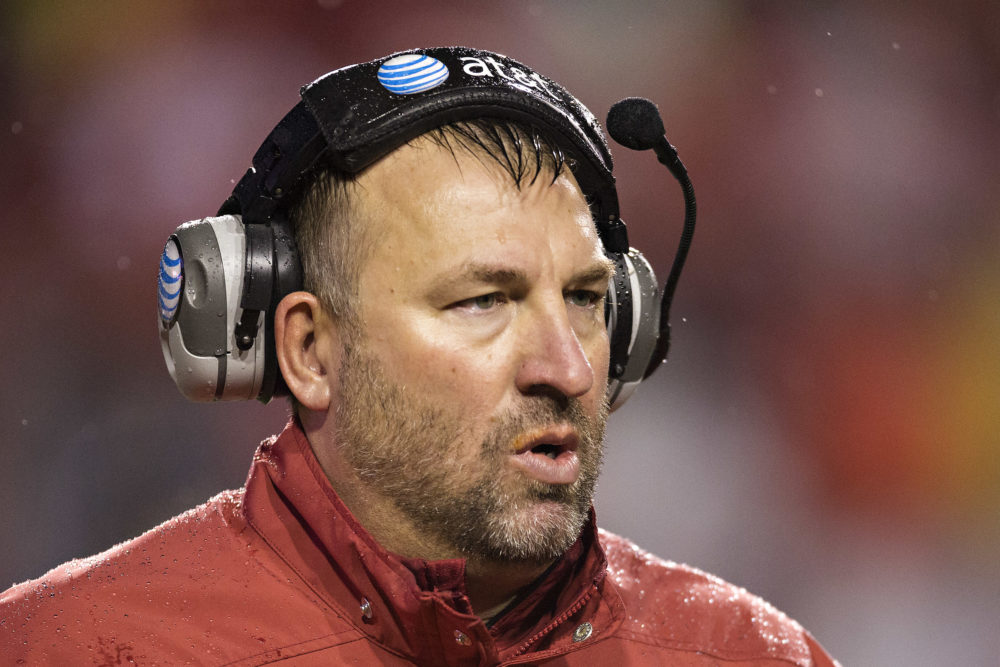 On (from) Wisconsin! That’s what Bret Bielema must have been thinking when he left the Badgers program for Arkansas of the SEC in December of 2012.

Truth is, when Barry Alvarez handed the keys of the program to Bielema in 2006, it seemed to be a perfect fit. Bielema was brought up through the Wisconsin culture, had the coaching philosophy to match and frankly, had a pretty good gig. Win nine or 10 games a year in Madison, and that’s good enough to keep paying the bills. He was set up nicely to do just that with the path that Barry had blazed ahead of him.

The handover from Alvarez to Bielema was about as seamless of a transition as you’d want for an outgoing head coach ready to park it on a cushy office job as the new athletic director. In his first year, Bielema inherited the inertia created for him and finished the season 11-1.

Then things got a little crazy.

The departure from Madison

Bret Bielema officially named the 32nd head coach in Arkansas football history. We wish you much success as you turn our program around

After an improbable 2012 Big Ten Championship Game win despite finishing third in the division (thanks to sanctions on Ohio State and Penn State) Bielema left for Arkansas with an exit that was a bit bizarre. (But we’ll get to that later.)

What has transpired since then has been less than stellar. Bielema was brought in to close the gap with Alabama and LSU, but so far that has been nowhere close to happening. On paper, it looked like a good hire to bring a guy in who seemed to fit the mold needed to compete with the brand of football being played in the SEC. But despite some close calls in individual games against the SEC’s upper-crust, potential has slipped from Arkansas’ grasp.

Bielema’s first season was a 3-9 train wreck that saw him win as many SEC games as mesitting on my couch. But at least that is excusable as a cautionary transition tale.

Bielema on change between Big Ten (when at Wiscy) and SEC: "Winning vs. losing. … I didn't come here to lose. I didn't expect to go 3-9."

However, things haven’t gotten much better in the three years since. By far, the best season came in 2015 with a grand total of eight wins, five of which were SEC victories that tied for third place in the SEC West behind… yep, Alabama. Oh, and the tie was with LSU.

So this leads us all to the question: Should Bret Bielema have left Wisconsin in the first place? Since his departure from Madison, the program hasn’t really missed a beat. It continues to win division crowns, make trips to Indy and flirt with the pinnacle prize. Wisconsin’s record in that time is 41-13 overall, 26-7 in league play, with two division championships.

And Arkansas? There’s no comparison. During the same time, Bielema has led the Razorbacks to an overall record of 25-26, 10-22 in the conference, and na-dah in sniffing anything close to a division title. There are zero wins against Alabama. Heck, there aren’t any victories over Texas A&M either, but who’s counting?

The state of things

Okay, reality check time. Wisconsin has not tailed off at all with Bielema moving on to greener pastures, and that’s after going through two more coaches. That right there kind of tells you the kind job he left. It’s a good one, folks, and a job that is underrated. Maybe even this guy could win at UW:

Okay, maybe that’s going too far. But you understand, right? Bielema left a program that had a winning culture and things set up to sustain it. It’s at a place where it’s easier to win and even when you don’t do so in big fashion, there’s still some acceptance of it unless the stadium begins to burn.

In some ways, I guess you have to give him credit for the challenge of Arkansas at the period of time during which he went there. The SEC West was arguably the best conference in the country, and you knew Les Miles and Nick Saban would be staring you down every fall.

Good luck, and go get ’em. Or most likely not. But good on Bielema for having confidence in his own abilities, I suppose.

But back to Wisconsin and the somewhat oily way Bielema’s departure went down. First off, there were some spats between Urban Meyer at the start of the season that were well-publicized. In that little rift, Bielema criticized Meyer for his recruiting tactics saying “This isn’t the SEC.”

But now, however, Bret Bielema is the SEC. To make matters worse, his own athletic director had no idea about his interest in Arkansas until the day he left. Generally speaking, teams poaching coaches will at least reach out to opposing ADs and ask for permission. That, in turn, would result in a conversation and feeling out of where things are.

But in this case — He Gawn!

But onward and upward the program went, hiring Gary Andersen away from Utah State, and then replacing him with a Wisconsin guy in Paul Chryst to keep the Badger culture going steady and strong. I say well done on that front.

You have to wonder where Bielema’s head is today. Does he ever think back and wish he never left the crappy weather, brats, and beer behind? Or maybe he enjoys his life outside of football much more in the South, where he can enjoy the outdoors more and make babies:

But here’s what we know: Wisconsin is no worse for the wear with Bielema moving on, while Arkansas is still chasing the SEC’s elephant in the room in Alabama. The Hogs program isn’t any closer to reaching Nick Saban on his pedestal, where he’s smoking a cigar, than they were when Bielema left Wisconsin like a thief in the night. And it likely never will be as long as Saban is yelling at reporters and frowning at children in Tuscaloosa.

Here’s what else we know: This will be a key year in the career of Bret Bielema. If Arkansas doesn’t make a statement towards progress, suffice to say, he’s likely in the unemployment line and may find it tough to find work at a Power 5 school with the track record he’s put together in the big, bad SEC.

Maybe then, when he’s sitting on his porch looking around and pining for the days back along Lake Mendota in Madison, or coaching a school with directional markings in its name, he can truly say, “This isn’t the SEC.”

Go have a year, Bret. God knows Wisconsin will.

1 thought on “Bret Bielema and his big career mistake”