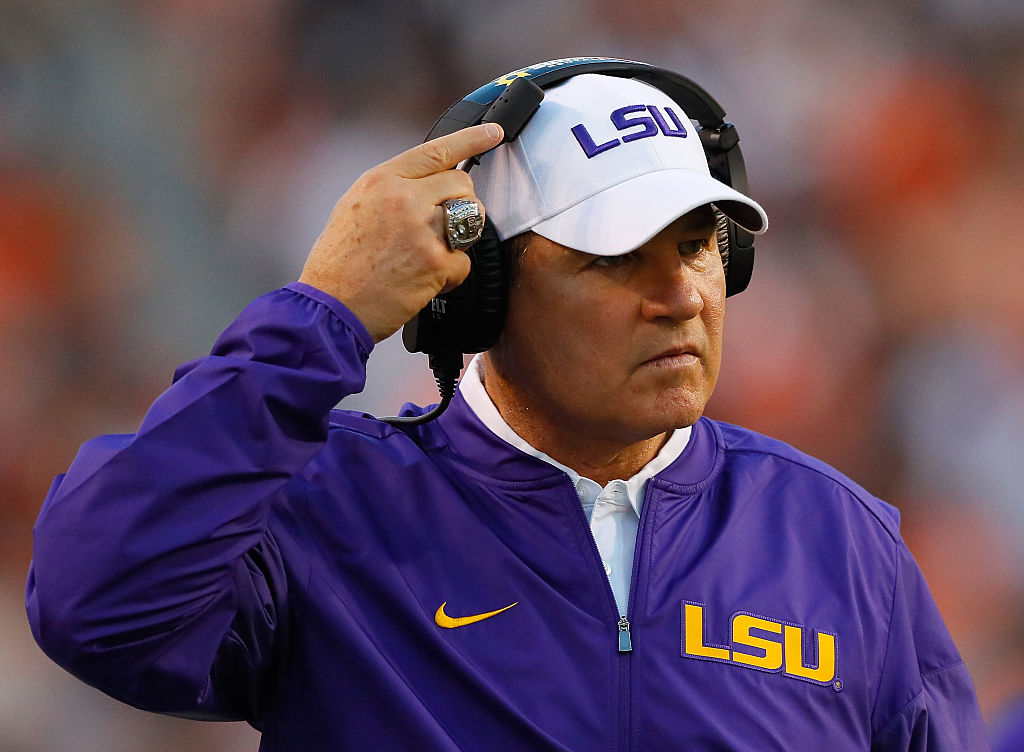 Five total games after narrowly avoiding losing his job, Les Miles has been fired at LSU. This move was pretty obviously coming ever since the Tigers’ 16-14 season-opening loss to Wisconsin, and the apparent lack of any offensive improvement from last year. But in order to end any chance of Miles staving off a pink slip yet again, the team decided to fire him following a loss to Auburn.

Without considering the inner workings of LSU politics and the drop-off in the past calendar year, this is a bit of a shock. The Tigers are paying roughly $13 million to fire the winningest coach in their history (yes, he won even more than Nick Saban did at LSU) — one who won a national championship in Baton Rouge and made it to another.

LSU hasn’t always been the superpower we know it as today, the team that will always give Alabama a run in the SEC West. Rather, Miles built it. The Tigers have had nine top 10 finishes since 1970. Five of those were under Miles.

But even though LSU has never had a better coach, and even though it’s ridiculous that boosters can just decide to fire a coach — as seems to have happened here — LSU’s move makes some sense. Miles refused to hire an offensive coordinator who could develop a quarterback, and the trajectory for the program didn’t look like it did in 2011.

The problem isn’t that LSU fired Miles, it’s that the Tigers want to be something that no program will ever be again: They want to be Alabama. And no matter what they do, that’s just not going to happen.

Back when the program’s biggest boosters tried to get Miles fired the first time, one of them said that it was partly because LSU wasn’t in the conversation for a national championship every year.

“In Louisiana, we expect national championships, and we’re not in it,” the booster told ESPN.

Ignoring the reasonable reasons to fire Miles, that is patently absurd. Only one team in college football, Alabama, can actually expect to compete for a championship every year. The only other even close is Ohio State. And despite the odds working against any team trying to get to that level, Miles has actually done a decent job of putting his team in national championship contention. He’s made the title game twice in the past decade and could have made a potential College Football Playoff another time — an astonishing rate for a program that went from the early 1960s to the early 2000s without any such success.

So the question is, what is good enough for a successor? Is it having a floor of 9-3 with a consistent average of 10-2, plus the chance to give Alabama and Nick Saban a run every few years? Apparently not, because LSU just fired that.

Sure, it may have fired Miles partly for the trajectory, but the firing also clearly, as that booster demonstrated, had something to do with a lack of consistent national championship relevancy. We know this because LSU didn’t even want to give Miles the chance to improve the trajectory. The program didn’t think its best coach ever was good enough, because suddenly, in a belief that has no legitimate precedent, LSU needs to be a top four team more than a third of the time.

Word is #LSU made the move now bc there was a feeling Les Miles might temporarily save his job again & program would keep going in circles.

So what happens when LSU isn’t suddenly the greatest team in college football history, or is merely a legitimate national championship contender — as in, a top four team — a third of the time? We already know the answer, and the Tigers are just going to keep getting disappointed.