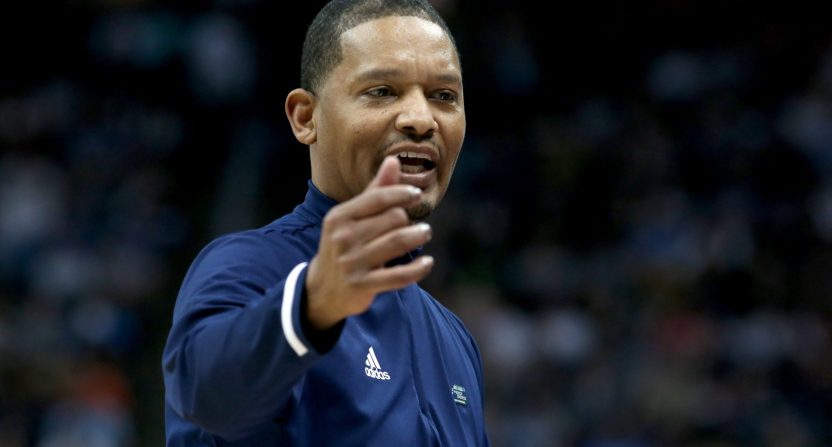 The South Carolina Gamecocks have picked their new head basketball coach. According to ESPN’s Jeff Borzello and Pete Thamel on Monday night, Chattanooga’s Lamont Paris has agreed to a five-year deal to be the head coach at South Carolina.

South Carolina and Chattanooga coach Lamont Paris have finalized a five-year deal to make him the school’s next head coach, sources told ESPN on Monday.

The deal still requires the formality of board approval later this week.

Paris, 47, led Chattanooga to a 27-8 record this season (his fifth with the school). The Mocs won the SoCon regular-season and conference tournament titles, resulting in an NCAA Tournament autobid.

CHATTANOOGA WITH AN INSANE 3 TO WIN THE SOCON CHAMPIONSHIP IN OT AND ADVANCE TO THE NCAA TOURNAMENT! WHAT A GAME! #MarchMadness 🏀 pic.twitter.com/fRYMvROYZm

Chattanooga was given a 13-seed and almost shocked 4-seed Illinois in the first round, but came up just short.

Paris will take over for Frank Martin, who was fired last week after 10 seasons with the Gamecocks. Martin’s tenure with South Carolina featured just one NCAA Tournament appearance, but that at least featured a trip to the Final Four. South Carolina went 18-13 (9-9 in SEC play) this season and is currently slots in at No. 100 on Ken Pomeroy’s rankings (the No. 34 defense, but the No. 203 offense).

While he’s spent the last five years in the SoCon, Paris has experience at the major-conference level. He was an assistant coach at Wisconsin from 2010-17 and was a key recruiter there.

He reached the NCAA tournament in each of the seven seasons he was on staff, including two Final Four appearances and a national title game loss to Duke in 2015.

Here’s a sampling of the Twitter reaction to South Carolina hiring Paris:

Lamont Paris would be a historic hire for @GamecockMBB.
-He would be the first African American head coach of a a major men’s sport.
-He’s a proven winner as a Head Coach.
-He’s worked for Bo Ryan and Greg Gard. Wisc. Does more with less.
-Paris would be a great hire. Period.

Lamont took that postgame press conference like a champ on Friday after a hard defeat. Went on and on.

Can obviously recruit very well because he brought in some high level transfers. I’ve heard now three players thank him for taking a risk on them.

His players truly love him.

I could not have left the presser in Pittsburgh any more impressed with Lamont Paris. Combined with the success he's had, he was an easy choice as someone to move up the ladder quickly. https://t.co/24T0NEEVeX

Lamont Paris will end up being South Carolina’s guy. Took a round about way to get there, but really like the hire for the Gamecocks

Realistically, the frustration that is being seen with the Lamont Paris hire has more to do with the way the process played out rather than the decision itself, IMO.

Some South Carolina fans need to get a grip. We’re one of the worst basketball programs in the power 6. Lamont Paris was one of Bo Ryan’s top assistants at Wisconsin (a real basketball program). Complaining about his record at Chattanooga is foolish. They went from 10 wins to 27