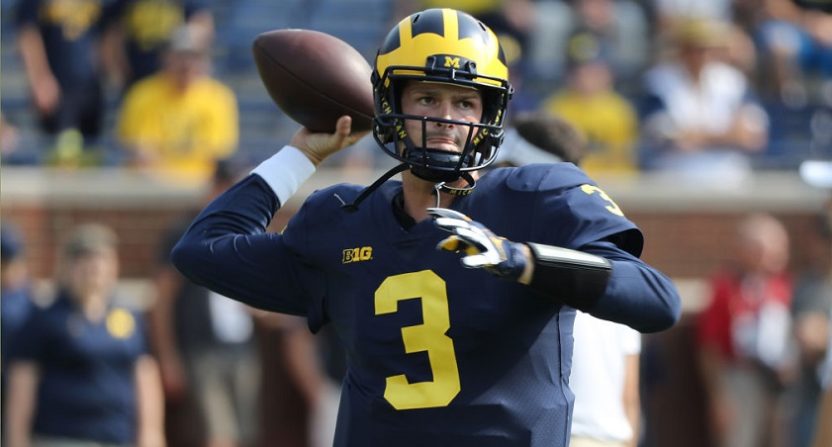 After a rough start with picks to begin the 2017 college football season, we came back strong in Week 3 with a 5-1 showing against the spread. That puts us at 9-10 ATS on the season.

Here’s hoping for continued good fortune with our Week 4 picks. This week’s theme: don’t get too fazed by last week.

Sell high on Purdue. Buy low on Michigan. We have not learned that much through three weeks. That line, when the season started, would have seemed ludicrous. Yes, the Wolverines struggle when teams put Wilton Speight under pressure. Purdue ranks 130th in FBS in both sacks and tackles for loss per game. Michigan has been lights-out on defense this season. Purdue has an average, one-dimensional offense and has struggled kicking field goals.

There aren’t many teams particularly bad at being home underdogs. But one of them is Purdue. The Boilermakers are 7-23 ATS as a home dog since 2010. Don’t outsmart yourself. Even stumbling, Michigan will win and find enough points to cover.

Stanford settles in for a home game after a weird three-game opening stretch with two road games and a neutral site in Australia. Jim Mora has to bring UCLA back up for a second straight road game after a tough loss at Memphis. The Bruins defense stinks, to put it mildly. Stanford does two things well: run the ball and pressure the quarterback on defense. Two things UCLA has not been able to do? Stop the run and protect the quarterback.

The Cardinal have won nine straight over UCLA (every game in the Jim Mora era) and are 8-1 ATS over that span. There’s no reason to buck that trend here. Comfortable Stanford win.

Does anyone know what to make of Florida State right now? Here’s a recap of their first three weeks. The Noles entered the season a playoff favorite. Alabama manhandled FSU in a 24-7 opening weekend win. A knee injury knocked starting QB Deondre Francois out for the season. Hurricane Irma hit, and the Seminoles have had two consecutive bye weeks since.

Here’s what we know about N.C. State. They can put up points. It’s quite difficult to run on the Wolfpack. That’s a lot to put on FSU’s three-star true freshman quarterback making his first start. We’d say this would be another N.C. State moral victory against a Top 5-10 team. But FSU has not yet proved it belongs there. Noles win, but that’s too many points amidst so much uncertainty.

Washington is quietly crap at running the ball. The Huskies (3.26 yards/carry) have about the same running game proficiency against FBS opponents through three weeks as Florida (3.20 yards/carry). The Gators played Michigan and Tennessee. Washington played Rutgers and Fresno State. Colorado’s defense has allowed just six points combined in two games against FBS opponents. They have been efficient on third downs and in the red zone. Washington needs to pass.

The forecast is calling for a rainy, cold night game in Boulder. Don’t forget about that altitude difference. Take the points.

USC has had its ebbs and flows in the post-Carroll era. One constant: beating Cal against the spread. The Trojans have covered seven of their last eight. USC has an efficient, balanced, and explosive offense with a great quarterback. Cal is average against the run and bad against the pass. Teams that pound the ball have had some offensive success against USC. Cal has a high-volume, low-efficiency passing attack. Why was the Texas game so close? USC got skunked on three drives inside the Texas 35 in the first half. That won’t happen again. Cal has started slowly in games this season. The Bears have trailed at halftime in all three of their wins. Starting slowly against USC would be suicidal. Trojans. By a lot.

There aren’t many teams who are great against the spread as home underdogs. One has been Vanderbilt under Derek Mason. The Commodores are 7-2-1 ATS as home dogs since 2014. They have won the last three games outright. Alabama’s offense remains a question mark. The Commodore defense has been stingy, disruptive, and has allowed just one play longer than 30 yards through three games. Vanderbilt should make the Bama offense work for points, holding them to field goal attempts (Alabama is not so hot at those) and limiting the number of possessions. Let’s not get crazy calling for a Vanderbilt upset. But, could they hold their own in a 21-6 type game? Definitely.