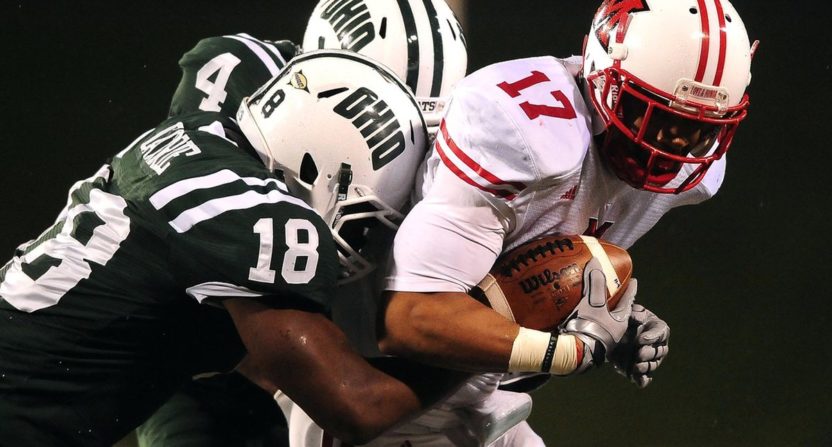 Western Michigan ran the table during the regular season last year and clinched a spot in the New Year’s Six with the MAC’s first automatic bid in the College Football Playoff model. But does that mean the MAC was the most dominant conference in the Group of Five mix? Hardly. But where exactly does the MAC stand next to its peers from the Group of Five?

Our college football staff gathers to voice their opinions on where they feel the MAC ranks in the Group of Five power ranking.

Matt Lichtenstadter: As is somewhat common when a Group of 5 team does what Western Michigan did last year, the bigger programs do take notice. While Western Michigan will still be a very good team, they won’t nearly hit their heights of last season. And comparing this conference to the other Group of 5 leagues, they slot right in the middle behind the American and Mountain West. It’s not inconceivable to think that a MAC team or two could replicate what Western Michigan did last season, but trends make it unlikely. However, the MAC is underrated as league on the whole and will still have good teams and entertaining football to enjoy, but the league doesn’t have the depth and quality at the top as some other Group of 5 leagues do.

Terry Johnson: Based on what we know right now, I’d place the MAC in the middle of the Group of Five. The AAC and Mountain West conferences are deeper from top-to-bottom, while the Sun Belt and Conference USA are just a step below the MAC.

With that said, the teams in the top half of the league are capable of beating anybody. Last season, Western Michigan beat two Big Ten opponents, Central Michigan defeated Oklahoma State, and Ohio University beat Kansas. Toledo has caused trouble for a number of Power 5 schools in the past, upsetting nationally ranked teams such as Pittsburgh, Purdue, and Arkansas.

And let’s not forget, Western Michigan wasn’t the first MAC team to land a spot on college football’s biggest stage. That distinction belongs to Northern Illinois, which earned a BCS bowl bid in 2012.

As for where the MAC will be five or 10 years from now, I predict it will be in the same place it is today. Although it won’t be as deep as the AAC, the teams at the top of the league will continue to compete for a New Year’s Day bowl game year in and year out. In other words: #MACtion is still must-see TV, and it will continue to be for years to come.

Kevin McGuire: I have been very clear on where I think the MAC stands among its Group of Five peers lately, and will not stray from that course today. As far as I am concerned, the MAC is a clear third place in the pecking order behind the American Athletic Conference and Mountain West Conference. I would caution, however, the Sun Belt Conference and Conference USA may be closer top to bottom than they have been in a long time to the MAC, and that should be a concern for the MAC moving forward.

Where the MAC remains nestled in the shadows of Big Ten country, the Sun Belt and Conference USA programs are tapping into more fertile recruiting grounds in the south and southeast, and over time those programs could benefit from that talent pool. What is holding those conferences back from surpassing the MAC as a whole for now is the adjustment period to recent realignment changes. Both conferences have added fresh new FBS rookies in recent years, and that takes some time to get up to speed. The MAC has remained stable as a conference despite having to part ways with both Temple and UMass in recent years.

The MAC has a chance to remain the third best Group of Five conference from top to bottom, and as last year showed it is still capable of sending an undefeated team to the New Years Six if they can manage to avoid slipping up. But that is the key difference. There is very little room for error in the MAC, where there is a bit more wiggle room in both the AAC and MWC in 2017.