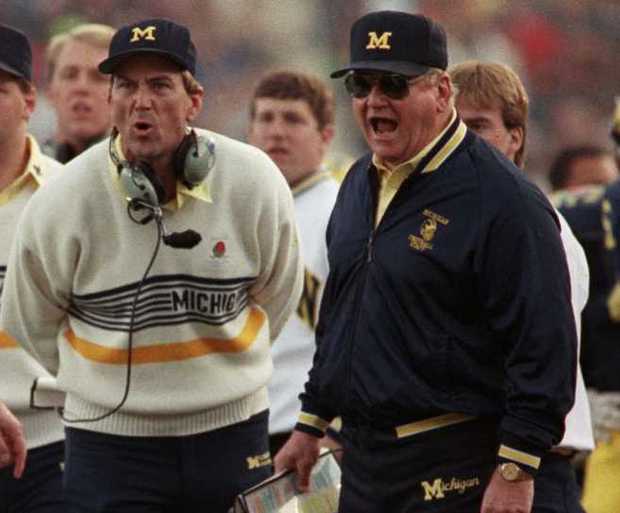 Which are the most tortured schools in the history of college football’s postseason? Notice that the word “playoff” isn’t used… because it can’t be. College football’s playoff tournament is just two years old. This is, therefore, a bowl conversation more than anything else.

It’s true that bowl games are unlike professional team sports. This is not a clean and natural transition; some obvious differences must be accounted for. Yet the basic principles established by Trister can very easily apply to bowl games. A survey of college football bowl history unearths five programs which stand out for the wrong reasons in postseason competition.

Can you identify the two famous coaches in this photo? 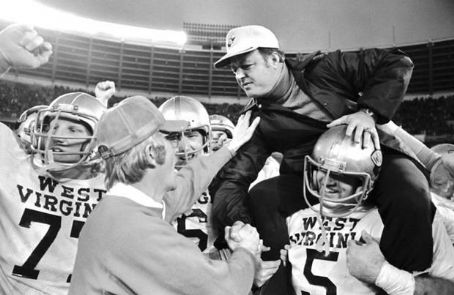 That’s Bobby Bowden on the right, leaning down to shake the hand of Lou Holtz at the end of the 1975 Peach Bowl in Atlanta’s Fulton County Stadium.

Bowden had just coached his last game at West Virginia before moving to Florida State for the 1976 season. Holtz was the coach of the North Carolina State Wolfpack, which occupy a rare — and tormented — place in college football bowl history. Four schools managed to endure more wretched postseason journeys than this longtime member of the ACC, but the Pack did make this short list.

Here’s the essential fact which cements N.C. State’s place in college football postseason hell: The Wolfpack have the most bowl wins (15) without a major bowl appearance. A major bowl appearance is defined as any of the longstanding top-tier bowls (Rose, Sugar, Orange), plus the pre-1996 Cotton Bowl (when the old Southwest Conference existed) and the post-1980 Fiesta Bowl (when that particular event moved to New Year’s Day), not to mention the BCS National Championship Game since its advent in 2007.

North Carolina State is, in professional sports terms, the team which has never made the championship round of the postseason in several decades of competition. The Wolfpack could be likened to the Cleveland Browns and Detroit Lions (no Super Bowls in the 50-season Super Bowl era), the Los Angeles Clippers (no NBA Finals since arriving in the league as the Buffalo Braves in 1970), or the Seattle Mariners (no World Series since their first season in 1977).

The Wolfpack have made 29 bowl appearances in all, with no signature bowl appearance to speak of. A win in the 2003 Gator Bowl over Notre Dame is the greatest postseason achievement in school history.

Wait, you mean four schools on this list are worse? Yeah.

“Hold on,” you might legitimately claim. “BYU won the national title in 1984, a minor miracle! No way should the Cougars occupy this list!”

Keep in mind that while everyone’s own definitions and parameters may vary, the idea of a tortured playoff history comes from more postseason appearances and fewer accomplishments within those appearances. Yes, BYU will always cherish 1984, but whereas North Carolina State went 15-13-1 in its 29 bowls, BYU is saddled with a 13-20-1 record in 34 bowls. The Cougars are the only program with more bowl appearances than N.C. State (34 to 29) and no major bowl berths.

This is a program which feasted on the Las Vegas Bowl in recent years, and enjoyed a run of four Holiday Bowl wins in five seasons (1980 through 1984). Other than those two concentrated periods of time, BYU has barely won any bowl games.

The Cougars hope to become a member of an expanded Big 12. This is a national program, given its recruiting base and its appetite for prominence. Given the primacy of BYU football, a bowl record seven games under .500, combined with a shutout in terms of premium bowl bids, rates as a shock. 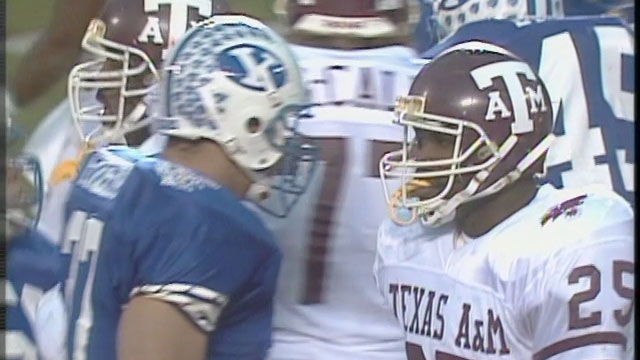 Football is king throughout the state of Texas, and while the Red Raiders have long lived in the shadows cast by the University of Texas, Texas A&M, Houston, and other programs in the Lone Star State, their bowl record is still jarringly poor.

Texas Tech has reached 37 bowl games. Only 16 programs have made more postseason pageants. The Red Raiders’ record: 14-22-1, slightly worse than BYU in three more bowl appearances. Texas Tech has appeared in three pre-1996 Cotton Bowls, but it won none of them. In the 1995 Cotton Bowl Classic, Texas Tech became the last Southwest Conference team to play in this venerable New Year’s Day event.

The Red Raiders were gunned down by USC and Keyshawn Johnson, 55-14: 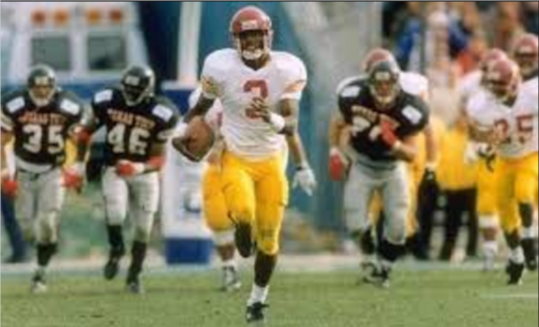 Pivoting from Texas Tech to Arkansas seems counterintuitive, especially since Arkansas won the national title in the 1964 season. However, the Razorbacks — like the one team in front of them on this list — represent a different kind of case study relative to the previous three teams you’ve read about. North Carolina State, BYU and Texas Tech never won a major bowl. Arkansas is an example of a program with a rich history in the sport, but a postseason resume which is thinner than the school’s tradition would suggest.

The Hogs, after winning the national title in 1964, could have cemented their place in college football history by winning the (January) 1966 Cotton Bowl against LSU. However, their offense stalled in a 14-7 loss to the Bayou Bengals.

Most visits to big bowl games have turned into letdowns for Arkansas. The 1965 Cotton Bowl against Nebraska and the 1978 Orange Bowl against Oklahoma represent the conspicuous exceptions. Arkansas is 4-7-1 all time in the Cotton Bowl, a deep disappointment given the extent to which the game mattered for the U of A and every Southwest Conference program.

Making matters worse, the Razorbacks are 1-5 in the Sugar Bowl. Their only win in New Orleans came in 1969 against Georgia. Their 2011 meeting with Ohio State easily could have turned into a late win, but a failure to execute a scoop-and-score on a blocked kick in the fourth quarter doomed them to defeat against the Buckeyes. 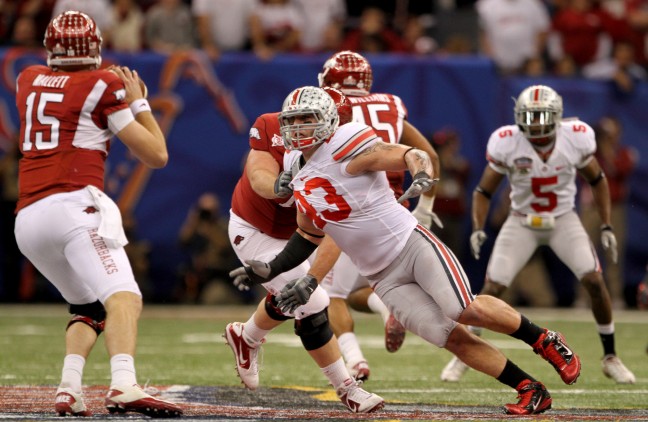 The Razorbacks’ overall bowl record is 15-23-3, which is unimpressive on its face, but there’s even more to the story. A total of 16 FBS programs have reached at least 40 bowl games. Arkansas isn’t merely the only one to fail to win at least 21 bowls; the 15-win mark isn’t particularly close. If “more appearances, fewer meaningful wins” is the central criterion of a tortured postseason history, Arkansas bears a particularly large bowl burden.

The general pattern of the Washington Capitals — regularly reaching the postseason, and almost always losing promptly — is manifested through a college football prism in the form of the Michigan Wolverines, especially under Bo Schembechler.

Bo knows Rose Bowls, but far more often as a participant than a victor (and best). Schembechler led Michigan to Pasadena 10 times, but he came away with a triumph only twice, in 1981 and 1989. The coaching legend lost five Granddaddies before he won one. Mastering the regular season and the Big Ten Conference wasn’t hard; beating a Pac-10 team in January became the toughest task of his career.

Michigan — a supremely tradition-laden program — won two Rose Bowls in 37 years, from 1952 through 1988. It hasn’t won a Rose Bowl since the national title-bearing victory over Washington State in 1998. Michigan’s Rose Bowl record is 8-12, and its overall bowl record sits under .500, at 21-23. The Wolverines own the worst bowl winning percentage among the 14 programs with the most bowl appearances. For all the ways in which this team has soared in regular season competition — over a very long period of time — it has created a spotty postseason portfolio. That track record is spotty enough to make the Maize and Blue No. 1 on a list where No. 1 is not something to aspire to.