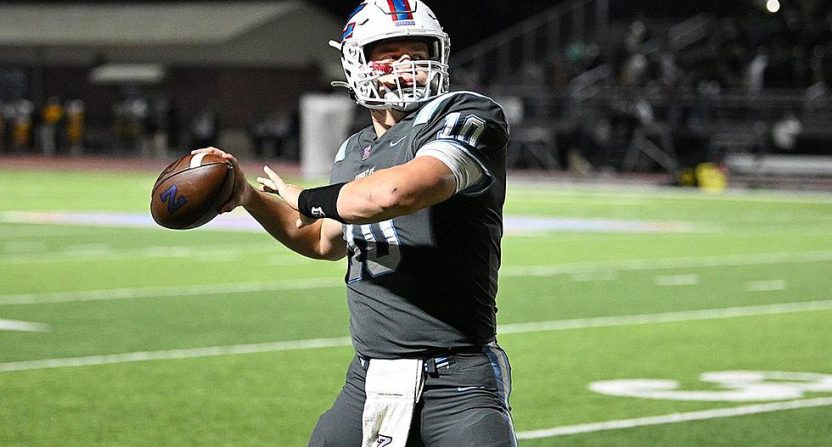 High SchoolNCAABy Reice Shipley on May 24, 2022

One of the biggest topics so far this offseason in college football is the looming commitment of Arch Manning.

Manning has seemingly narrowed down his choices to three schools, with Texas, Georgia, and Alabama in the running to land the top recruit in the 2023 high school class.

While Alabama was reportedly still in the running for Manning, reports emerged earlier this month that the program wouldn’t just sit back and wait for Manning’s decision and be left high and dry if he didn’t commit.

The Tide has also been going after quarterback Eli Holstein, who is the eighth-ranked quarterback in the 2023 recruiting class.

Manning may not be too pleased with what has occurred on Tuesday, as Holstein has officially committed to Alabama.

This move has drastically changed where the On3 prediction machine has Manning projected to commit to, with Alabama dropping drastically down to only a 1.2 percent chance of landing him.

The On3 recruiting prediction machine has kept Texas and Georgia ahead of Alabama the last month in the recruitment of Arch Manning. Tide got a 2023 QB today with Eli Holstein. pic.twitter.com/JidttjEmNq

Many around the college football world are all but ruling out Manning heading to Tuscaloosa now.

With Eli Holstein committed to Alabama, I gotta believe Arch Manning to Texas is a real possibility now.

Scratch Alabama out of the Arch Manning Sweepstakes? https://t.co/LPAgvtjtct

Sooo is Arch Manning off the table for Alabama then? https://t.co/GQcspIb5fV

Like many industry insiders at @247Sports were saying, Texas has to feel good about its position with 5-star QB Arch Manning. https://t.co/p7tV9tyGyk

Would seemingly impact the race for Arch Manning. The Tide just took a top-10 QB in the 2023 class. https://t.co/q6MmSHV8cz

Holstein’s commitment is also likely to upset Texas A&M head coach Jimbo Fisher, who verbally attacked Alabama head coach Nick Saban numerous times over the past few days after Saban blasted him and the A&M program for their recruiting tactics regarding NIL deals.

The top-10 quarterback prospect had previously committed to Texas A&M but de-committed back in March. He was still considering the Aggies as a potential place to re-commit but instead decided to play for Saban instead of Fisher.

Many see this as another chapter of the Fisher-Saban drama that may be lingering for years to come.

Four-star quarterback Eli Holstein of Zachary (La.) High — a former Texas A&M commit who ranks No. 54 nationally in the 2023 class — has committed to Alabama.

Add this into the twist and turns of the Arch Manning saga.

While Manning likely won’t be going to Alabama, Holstein is by all accounts also a terrific quarterback prospect who can with the uber-talented Crimson Tide roster going forward.