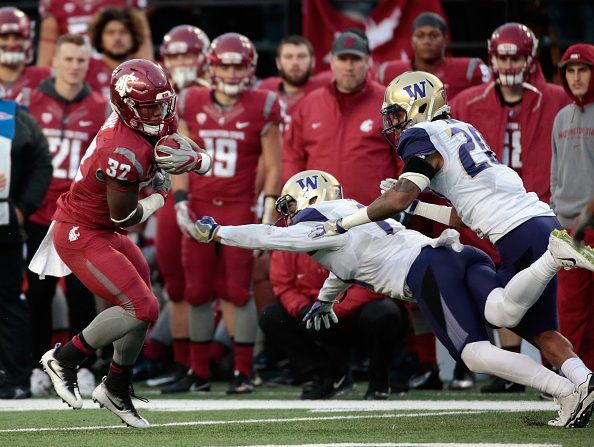 Since the Pac-12 expanded to add Colorado and Utah, the North division has won every conference championship. Stanford’s won three and Oregon’s taken home two. Washington just won its first this past season.

But while those three programs have owned the headlines in the North, the Washington State Cougars have been sort of lying in wait — building a pretty sturdy program, and one that has a real chance to contend in 2017.

Mike Leach started slow in Pullman, Washington, at 3-9. The Cougars jumped up to 6-7 before falling back down to a losing record in 2014. The seat was getting warmer for college football’s most unconventional head coach and his up-tempo offense. But then suddenly, Wazzu just figured it out.

They went 9-4 with a Sun Bowl win in 2015, then 8-5 after a Holiday Bowl loss in 2016. If not for an Apple Cup defeat at the end of the regular season last fall, they would’ve made it to the Pac-12 Championship Game for a rematch against Colorado (the Cougars lost 38-24 just a few weeks earlier).

Despite the one-win downgrade, the season was largely a success. The team’s seven conference wins were the most they’ve recorded since 2002 (when they tied for the conference title at 7-1).  Now, the team returns quite a bit of last year’s production — including quarterback Luke Falk — and seems poised to really push for its first conference championship in 15 years.

The key here is “push for,” however. The Cougars are far from favored right now. but have enough returning talent to entertain the idea. Stanford just lost its best player in Christian McCaffrey. Oregon’s breaking in a new coach and is coming off of a losing season. Washington brings back QB Jake Browning, but also loses John Ross and a slew of standout defenders (Kevin King and Budda Baker, most importantly).

If there was ever a time to leap up in the standings (they missed first place by one game last year, after all), this could be it.

Washington State’s schedule won’t help, though. Along with hosting Boise State in non-conference play, the Cougars will face USC, Oregon, Stanford, Utah and Washington. The final two are both on the road, with a one-week bye in between. Even a very good team could potentially struggle with that string of six opponents. And it’s not as if the rest of the Pac-12 is a collection of pushovers, either. Every week will be a slog, including the team’s seemingly annual loss to an FCS opponent (they’ve lost two straight).

Still, just look at the Cougars’ roster. Falk, of #Pac12AfterDark fame, threw for nearly 4,500 yards to pair with 38 touchdowns while completing 70 percent (!!!) of his passes. Last year’s leading rushers, James Williams and Jamal Morrow, are both back (and Williams was just a freshman in 2016. Five of the team’s top seven receivers return. And because Falk was able to spread the ball around so much, even losing their best pass-catcher (Gabe Marks) is not as big of a problem as it would be elsewhere. I mean, 10 different players caught at least 23 passes last year. It’s likely they’ll find ways to have someone step up into the departed production pretty quickly.

Because the offense appears so at ease in its system, the key to Washington State’s success may surprisingly be the defense. Wazzu is coming off a season in which they finished in the top half of the country in yards allowed per game (406) and top-50 in points per game allowed (26.4). They were bad against the pass (112th), but top-30 against the run (mostly because no one had time to run against them). While they didn’t get after opposing passers much, they did force turnovers.

Under Leach, Washington State’s never going to have an amazing defense, just by way of pace of play. But they did have a very capable unit last year, which proves more than enough when you’re running any variation of a spread offense. It was actually the first time the Cougars even finished close to that high in total defense since Leach arrived.

That’s the main reason why there could be a bit more optimism around Pullman this fall, as Leach & Co. survey the divisional landscape around them.  They’ll replace pieces on defense, but so will everyone else around the division. Washington was the only top-30 defense in the conference last year (and again, it loses several of the reasons for that figure). Washington State was one of four teams to finish top-32 in total offense, but they’re the only one of those teams to have both the same coach AND same quarterback from last year.

Washington State doesn’t recruit like a national power, but few in this conference really do. To contend, the Cougars have just played the long game. They’ve waited and watched. And now, Mike Leach could very well have his best-timed team yet in Pullman. Now they just need the schedule to cooperate.