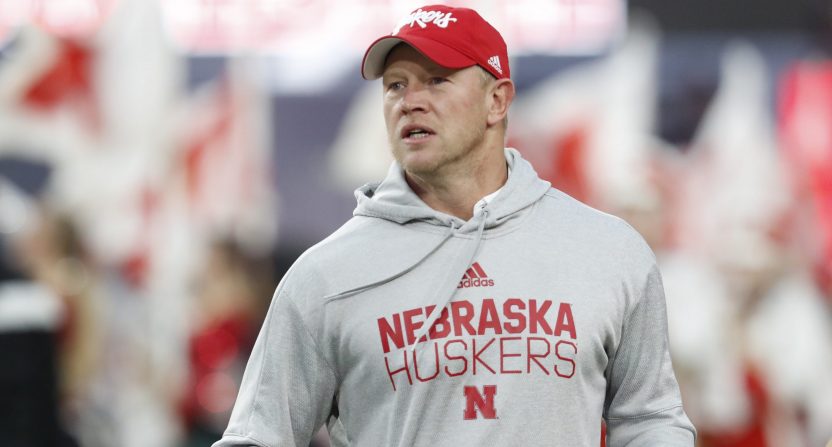 It’s July which means football media days with coaches selling optimism. However, for some, there is also sense of desperation. Here are five major-conference coaches who need big seasons:

The AAC has produced a number of Power 5 coaches. Many haven’t worked out: Tom Herman, Charlie Strong, and Chad Morris were fired. And Justin Fuente, Mike Norvell, and Scott Frost are feeling the heat.

Fuente seemed like an ideal guy to follow in the footsteps of the retired Frank Beamer. Fuente was young, hired at the age of 39. He also undertook one of the most successful rebuilding jobs in recent memory. Memphis was 5-31 in the three seasons before his arrival. Over his final two seasons, the Tigers went 19-6 with a bowl victory and were ranked No. 25. Fuente also developed quarterback Paxton Lynch into a first-round pick.

Surely he could restore Virginia Tech to prominence. Well, after winning 10 games and a bowl game in his first season, the Hokies are trending in the wrong direction. Last year was the program’s first regular-season losing record since 1992 (they also went 6-7 in 2018 after losing a bowl game). Virginia Tech is expected to compete in ACC’s Coastal Division. Fuente could help himself by getting off to a good start as the Hokies open the season at home against division favorite North Carolina.

It feels like every year since he was hired Clay Helton has made the hot seat list. USC is one of those high-pressure jobs where you’re always under the gun. In last year’s pandemic-shortened season, the Trojans went 5-1 and were ranked No.  21 in the final Associated Press poll. That bought Helton additional time, but you also get the feeling that this could finally be his final season. USC athletic director Mike Bohn was hired in November 2019 to assess the football program. It was surprising that he kept Helton, considering the fanbase has been agitating for a change for years.

There are reasons for optimism. The Trojans’ incoming recruiting class was ranked No. 7 overall by 247sports.com, highlighted by the nation’s No. 1 overall recruit, Korey Foreman. The defensive end chose USC over Clemson, LSU, and Georgia. Star quarterback Kedon Slovis is a possible first-round pick. The Trojans’ schedule is also very manageable, with five of their first eight games at home. Plus, they don’t have face Oregon or Washington. USC should compete for the South Division crown. If they don’t, Helton might not survive.

Athletic director Kirby Hocutt fired Kliff Kingsbury in 2017 after he went 35-40 with three bowl appearances in six seasons. So, you probably know how Red Raiders fans feel about Matt Wells, who hasn’t reached a bowl game and ended last season with a 16-13 victory over winless Kansas. Things were so bad that some were clamoring for Texas Tech to get (gulp) Art Briles (!?!). That’s some desperation. Hocutt decided to stay the course. But he also made it clear that patience is wearing thin, saying: “We must get better. It’s time. It’s time for us to take that next step.” Texas Tech has five straight losing seasons, its longest stretch of since the 1980s.

Hocutt hired Wells from Utah State, so he has a lot invested in seeing this move work. In Wells’ final season in Logan, he went 10-2, which made him one the hottest mid-major coaches. At Texas Tech, he probably needs to make a bowl game to save his job. That’s something the program hasn’t done since 2013. The team does return 15 starters. The biggest addition might be Oregon transfer quarterback Tyler Shough. If he plays well, maybe the Red Raiders can surprise.

Remember when Jim Harbaugh was the biggest name in football? He was wanted by both college and the NFL and could seemingly pick the destination of his choice. Well, life comes at you fast. Yesterday’s genius can be tomorrow’s dolt. As a Michigan Man, Harbaugh knows the drill. The coach at Ann Arbor is expected to compete for national championships and beat Ohio State. Harbaugh, who returned to his alma mater in 2015 after a successful stint with the San Francisco 49ers, has failed to do either. The Wolverines haven’t won the Big Ten since 2004, have never reached the College Football Playoff, and are 0-5 against Ohio State under Harbaugh.

Meanwhile, over the past seven years, archrival Ohio State has been to the playoffs four times with a national championship (2014) and a runner-up finish (2020). The Buckeyes have also won the Big Ten four years in a row. All this despite changing coaches; Ryan Day is in his third season since taking over for Urban Meyer.

Sure, Michigan signed Harbaugh to a contract extension through 2025. But that’s just for recruiting purposes. Schools can always find buyout money if they want to get rid of someone. You get the sense that this bad marriage is almost over.

Trev Alberts is the new athletic director, and the one thing we all know about ADs: they like to bring in their own guys. Alberts, an All-American linebacker at Nebraska in the 1990s, has publicly supported Scott Frost. But those words probably will mean nothing if the Cornhuskers have a fifth consecutive losing season. Nebraska hasn’t been nationally relevant in decades, and the most successful coaches they’ve had since Tom Osborne were both fired after winning nine games (Frank Solich and Bo Pelini).

Frost, who quarterbacked Nebraska to a share of the 1997 national championship, was supposed to bring back the glory days. And his hire was almost universally praised after coaching UCF to a 13-0 season in 2017. But Nebraska is a different program than the one he played for.

Since the Cornhuskers left the Big 12 for the Big Ten in 2011, they have posted a winning conference record just five times under three coaches, and haven’t landed a 5-star recruit. The Cornhuskers are expected to finish near the bottom of the West Division standings again. If they don’t get a boost from newcomers like transfers running back Markese Stepp (USC) and wide receiver Samori Toure (Montana), this could be the end for Frost.