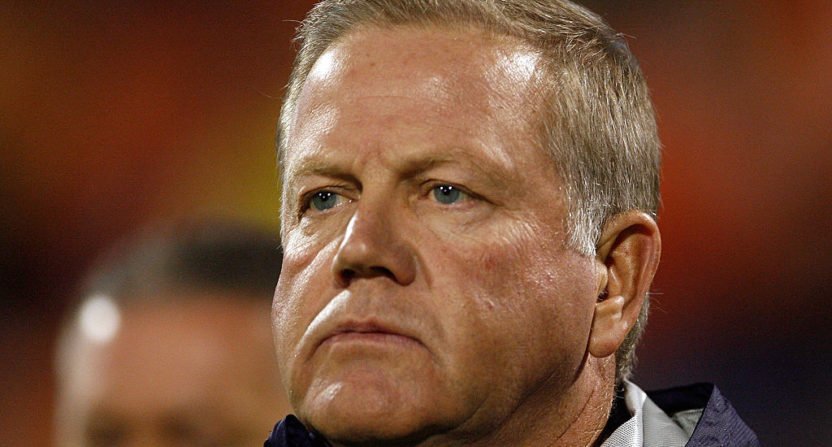 Former Notre Dame linebacker Douglas Randolph is suing the school and coach Brian Kelly for negligence in the wake of an injury the team allegedly urged him to play through. The lawsuit claims “results of a spinal scan were concealed from him and that he should not have been allowed to continue playing,” according to Laken Litman and Mark Alesia of the Indianapolis Star.

Instead, Randolph played the entire 2015 season. After the season, he was diagnosed with spinal stenosis and told he could have permanent nerve damage in his neck.

In the lawsuit, Randolph alleges he “suffered numbness in his upper extremities” after a hit during a practice early in the 2015 season. However, the staff allegedly dismissed the incident:

The lawsuit says he informed trainer Rob Hunt of his symptoms and that Hunt dismissed the complaint. Hunt, the lawsuit said, pulled Randolph out of practice for two minutes before returning him to full participation.

The numbness persisted throughout the year, and Hunt and the team doctor again allegedly dismissed the symptoms again after an MRI, the results of which were not made available to Randolph:

The lawsuit states that Randolph’s symptoms continued after every impact he experienced on the field.

He had an MRI, and Hunt and a team doctor told Randolph it was safe for him to continue playing, the lawsuit said.

The lawsuit says neither the imaging nor the results of the scan were given to Randolph. Randolph says his symptoms worsened during the season.

The crux of the lawsuit, which does not specify the amount sought in damages, is that Randolph would have chosen to end his career much earlier, potentially avoiding permanent damage, had the school not kept those medical records from him while encouraging him to continue playing.

Randolph’s symptoms worsened as he continued taking hits in practices and games over the next four months. During the Fiesta Bowl in January 2016, he felt complete numbness in all his limbs, but once again Hunt allegedly dismissed the problem and told him to keep playing:

During the Fiesta Bowl on Jan. 1, 2016, Randolph alleges that he “suffered complete numbness in all four extremities.” He informed Hunt, who told him to “continue playing” and “get back in the game,” according to the complaint.

Randolph finished the year with five tackles in five games.

After the Fiesta Bowl loss, Randolph received another MRI and was diagnosed with spinal stenosis, “a narrowing of the spaces within your spine, which can put pressure on the nerves that travel through the spine,” according to the Mayo Clinic’s website. He then visited another doctor not affiliated with Notre Dame and was told about “possible, if not probable, permanent nerve damage in his neck that had occurred as a result of continuing to play college football.” He claims he’s continued to suffer from incapacitating pain, numbness, headaches, and other symptoms ever since.

Randolph ended his playing career but stayed on scholarship via medical hardship, and worked with the defensive line as a student assistant during the 2016 season.

Notre Dame officials have not yet commented on the lawsuit. Brian Kelly is certainly not in a position of strength, and as we saw with Indiana’s dismissal of Kevin Wilson for mishandling and/or mistreating injured players, the climate right now is not one suited for coaches to survive stories like these.