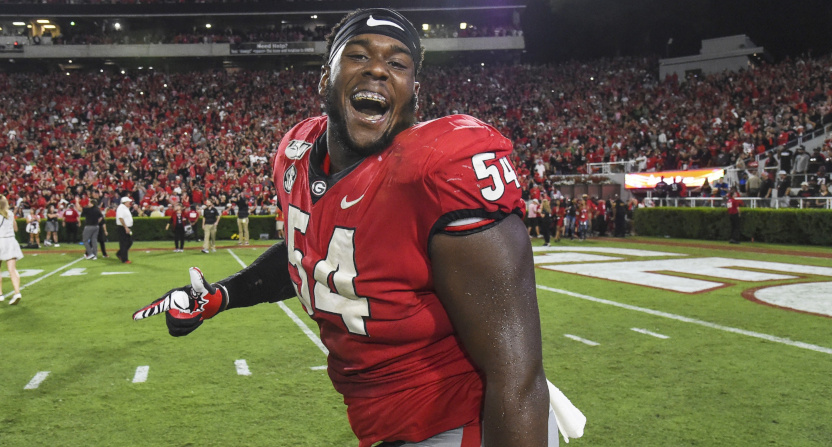 No. 3 Georgia held off No. 7 Notre Dame before a record crowd at Sanford Stadium with a 23-17 victory. For Georgia, it was a bit of vengeance after the Bulldogs were left out of the College Football Playoff last year and forced to resort to mocking Notre Dame on Twitter as the Irish were being blasted 30-3 by eventual national champion Clemson. Georgia head coach Kirby Smart had even stumped for 11-2 Georgia to be included in the College Football Playoff after losing to Alabama in the SEC Championship Game. But to the dismay of Smart and Georgia players, they were passed over by the selection committee for Alabama, Clemson, Oklahoma, and Notre Dame.

It was a pretty easy decision to make for the committee, but that still didn’t sit well with Georgia. As Notre Dame proceeded to get dominated by Clemson and Alabama took care of Oklahoma, Georgia players resorted to mocking the selection committee’s decision to leave Georgia out.

A mere 10 months later, Georgia and Notre Dame found themselves on the same field in the second half of a home-and-home arrangement that started two seasons ago when Georgia edged Notre Dame in South Bend en route to a run to the national championship game. As if a matchup of top 10 teams needed any extra juice, the opportunity to make a thundering statement to everyone watching was too good to pass up for Georgia.

Georgia was a heavy favorite in this game, but the Bulldogs had their hands full with the Fighting Irish. But what separates Georgia from Notre Dame is what led to a victory. The Bulldogs had the better playmakers on offense and defense and better depth and athleticism; they lost some notable starters on offense and defense and still wore down Notre Dame in the second half.  And when Georgia muffed a punt deep in their end in the first half, the defense made a big stop to hold the Irish to a field goal. Georgia may not have blown Notre Dame off the field the way many expected, but they won because they were the better team in all the areas that prevent Notre Dame form joining the top tier of college football.

Georgia now has a high-quality win. They have the best team in the SEC East. They have a clear path back to the SEC Championship Game where the only potential hurdles may be a neutral site game against Florida and a road trip to Auburn, and they may even be able to afford to lose one of the two. Georgia also continued a nice little string for the SEC picking up wins in spotlight games. Florida topped Miami in Week 0. Auburn defeated Oregon in Week 1 and LSU defeated Texas in Week 2 on the road. Now, Georgia has defeated the Fighting Irish and sent Notre Dame down a tougher road to return to the playoff.