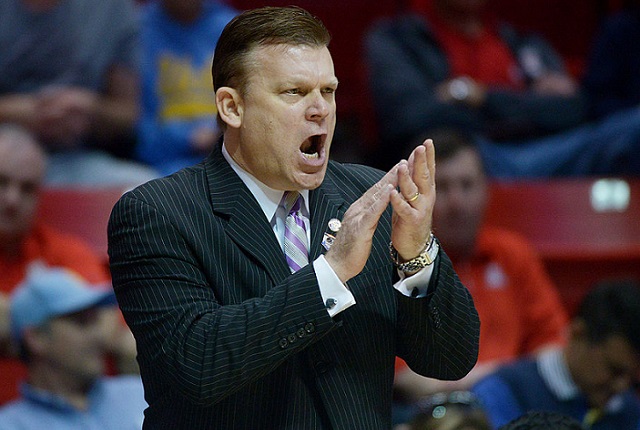 The college basketball coaching carousel has finally slowed. Athletic directors will try to tell you that the new guy will be significantly better than the last guy. But several of those administrators will be wrong about these new hires.

Here’s a look at how some top programs did in their recent searches for the next great coach.

#OKState AD Mike Holder knew he wanted to hire Brad Underwood before he even met him: https://t.co/qIVo3e2Lwo pic.twitter.com/sqCameTEIa

Brad Underwood has been on the radar for many programs given how wildly successful he was at Stephen F. Austin. He was 89–14 in three seasons with two NCAA tournament wins (upset victory over No. 5 seed VCU in 2014 and another over No. 3 West Virginia last month). The Lumberjacks were denied a Sweet 16 trip when they lost to Notre Dame in the final seconds on a tip-in.

In the recent past, Underwood turned down mediocre jobs like Southern Mississippi and Marshall. Now, he has one of the better jobs in the Big 12.

At times, Oklahoma State has had the talent to compete with powerhouse Kansas. In fact, the Cowboys stunned the Jayhawks this year – the lone highlight in a 12-20 season. The program was hurt by the absence of guard Phil Forte, who missed most of the year with an elbow injury. With four returning starters, Oklahoma State could challenge the Jayhawks next season.

Can Tubby Smith ride the Memphis job into the Basketball Hall of Fame? https://t.co/62wJfvTeUt

Tubby Smith is a quality coach. At basketball schools, he’s had success. Smith went 79–43 at Tulsa with a pair of Sweet 16 appearances, and 263–83 at Kentucky with the 1998 national championship in his first season. When he was at non-basketball schools, he’s been solid. Smith directed Georgia and Minnesota to multiple NCAA trips and getting Texas Tech to the NCAA tournament this past season for the first time in almost a decade.

One knock on Smith is that he’s never excelled at as salesman. Unfairly or not, he has the reputation of a guy who would rather break down game film than schmooze with recruits. He’s not John Calipari or Rick Pitino. Then again, who is? In order to win big at Memphis, you have to sell Memphis. Smith’s success will hinge on his ability to keep the in-state talent at home, along with bringing in the McDonald’s All-Americans from elsewhere.

Athletic director Chris Del Conte pulled off a small miracle by luring Jamie Dixon away from Pittsburgh back to his alma mater.

While joining the Big 12 has been a boon to the football program, it’s been a near-death blow for basketball. Since joining the league in the 2012-13 season, TCU is 8-64 in conference play.

Dixon, 50, instantly brings credibility. He was 328-123 at Pittsburgh and had tremendous success early with a pair of 31-5 seasons, two Sweet 16 appearances and reaching the Elite Eight in 2009. He has a tough job on his hands, but expectations will be extremely low and there is a lot of talent in Texas. Any small successes Dixon has will be cheered loudly.

Chris Beard is the college basketball version of the Runaway Bride. If he takes Texas Tech, it'll be his 4th coaching job in 54 weeks.

Guess we should give Texas Tech athletic director Kirby Hocutt credit for getting Chris Beard. Hocutt rebounded nicely after losing Tubby Smith to Memphis. He aggressively went after someone with strong ties to the program. Texas Tech is a tough job and you need someone who understands the culture, as well as what you’re up against in the highly-competitive Big 12.

Beard worked over a decade at Texas Tech, mostly under Bob Knight. He was there the last time the Red Raiders won an NCAA tournament game, when they reached the 2005 Sweet 16. He got his first head coaching stint at Division II Angelo State, where he spent two seasons. This past year, in his only season at Arkansas-Little Rock, Beard guided the Trojans to a 30-5 record and upset of Purdue in the NCAAs.

Beard’s reputation took a hit for the way he left UNLV. But if he has success in Lubbock, only that will matter.

Bryce Drew, 41, said he wants to get the program to its first Final Four. That’s a bold proclamation for a school that last reached the Elite Eight in 1965.

Vanderbilt is atypical from the rest of the Southeastern Conferences. It’s a private school in a big city with a strong academic reputation. But because it’s different, that could be an attractive selling point to recruits. Outside of Kentucky, there isn’t an established power in the league. It just needs the right coach.

Drew should be an upgrade over listless Kevin Stallings. He led Valparaiso to the postseason in all five of his seasons and twice to the NCAAs. The Crusaders went 30-7 last season and was the NIT runner up.

The new coach will have work to do in his first season. Vanderbilt is losing center Damian Jones and guard Wade Baldwin IV early to the NBA draft.

Jerod Haase is a California native. He played at Cal (before transferring to Kansas), so he knows the West Coast. Haase, 42, will try to bring in enough talent through Stanford’s rigorous academic standards.

The Cardinal hasn’t been a factor in the Pac-12 since the Mike Montgomery era ended (the 1998 Final Four, a 30–2 record and a conference championship in his final season in 2003-04). In eight seasons, coach Johnny Dawkins never got Stanford further than a third-place conference finish and a surprise 2014 Sweet 16 trip. It was the Cardinal’s lone NCAA appearance during his tenure. Haase, unlike Dawkins, has previous head coaching experience, guiding UAB to an NCAA tournament upset over No. 3 seed Iowa State in 2015. The Blazers won Conference USA this past season.

Been a Rebel fan since '81. Been to Final 4's, regionals, season ticket holder for years. If Menzies is hired, consider me done w/ #UNLVmbb.

Last week might have been the most embarrassing moment for UNLV basketball since three players were photographed in a hot tub with gambler Richard “The Fixer” 25 years ago.

How does a reputable program lose the coach it hired to Texas Tech just after being on the job officially for seven days? Why would anyone leave Las Vegas for Lubbock?

The Chris Beard fiasco may haunt athletic director Tina Kunzer-Murphy, but that wasn’t the only misfire. The program swung at missed at numerous candidates including (possibly) Rick Pitino and (definitely) Mick Cronin. Her best hope is that Marvin Menzies is a decent consolation prize. Menzies was a UNLV assistant under Lon Kruger in 2004-05. At New Mexico State, Menzies guided the Aggies to five NCAA tournament appearances in nine seasons.

There are few absolutely, positively terrible major conference jobs in college basketball. Rutgers is on that short list. It’s amazing that Rutgers has been so bad for so long, given its proximity to talent-rich New York City. The job has become even harder with the program’s move to the Big Ten. Rutgers’ last NCAA appearance was during the Bush Administration: the first Bush (1991).

Rutgers struck out by hiring a big name in alum and former NBA coach Eddie Jordan (29–67). The move to Pikiell seems prudent. He is used to building for the long run. He was at Stony Brook for 11 years and didn’t reach the NCAAs until this past season. It’s going to take long-term vision to guide Rutgers and if given enough time, the Scarlet Knights might have (finally) picked the right guy.

The most puzzling hire of the off-season. Josh Pastner left Memphis where he was on thin ice. However, it’s inexplicable why Georgia Tech would embrace the 38-year-old.

Pastner had one terrific season at Memphis (31-5 in 2012-13) but since then, the losses have steadily increased — culminating with last year’s 19-15 record, 8-10 in the American Athletic Conference. Pastner likely would have been fired earlier, if not for a reported $10 million buyout. Memphis is a good job with good facilities and a fertile recruiting base.

Now, Pastner is in a tougher conference with tougher coaches (Mike Krzyzewski, Roy Williams, Rick Pitino and Jim Boeheim) and a tougher sell to recruits. Yes, Atlanta has plenty of talent, but most of the best players rarely stay in state. If Pastner couldn’t win big in the AAC, how will he win in the ACC?

The second-most puzzling hire. There weren’t many tears shed at Vanderbilt when Kevin Stallings left for Pittsburgh. Stallings did some good things during his 17 seasons in Nashville, with Sweet 16 appearances in 2004 and 2007. But he has also underachieved lately, winning one NCAA game in nine years.

Vanderbilt went 19-14, and tied for third last year at 11-7 in a weak SEC. (Only three teams made it to the NCAAs.) The Commodores were lucky to get into the NCAA play-in game and were smashed 70-50 by Wichita State.

If Panther fans soured on Jamie Dixon, wait until they get a load of Stallings. Since joining the Atlantic Coast Conference in 2013-14, Pittsburgh hasn’t finished higher than fifth. Good luck with Stallings.