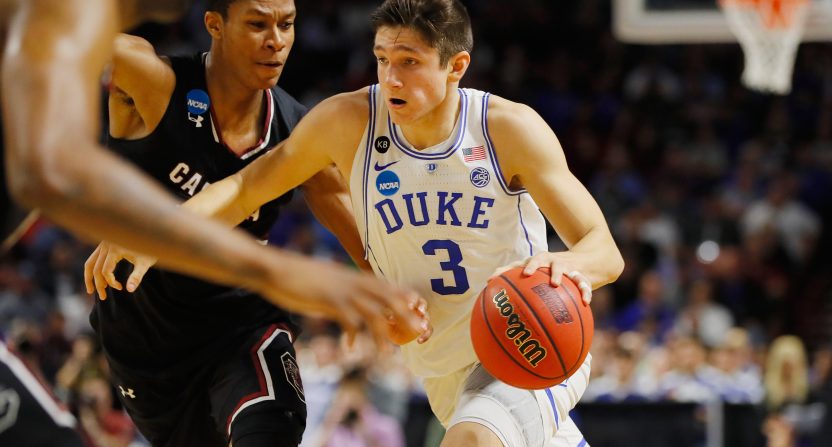 The most hated player in college basketball is coming back for more.

Duke guard Grayson Allen announced Tuesday he will forgo the NBA Draft and return to school for his senior season. Via ESPN:

“The last few weeks have provided the opportunity for a lot of reflection and prayer,” Allen said in a statement released by the school. “I’m a firm believer that when something feels right, you go with it. The chance to play with next year’s team just felt right.”

Allen’s decision to return isn’t much of a surprise, given that his numbers dropped across the board from his sophomore to his junior season. After scoring 21.6 points per game in 2015-16, his average plummeted to 14.5 last year. Citing NBA executives, ESPN reports that Allen would be selected in the second round of the draft if he were to declare now.

Duke will lose Luke Kennard, Jayson Tatum and Harry Giles to the NBA Draft, but Coach K’s team still figures to be all right in 2017-18 with Allen and Frank Jackson in the backcourt.

Of course, much of the conversation around Allen concerns things other than his basketball ability. The guard has become the most reviled player in the country, partly for his tendency to trip opposing players (for which he was suspended in December) and partly for the fact that, as Duke’s resident white guard, he allows people to project a lot of things about privilege onto him.

Maaaaaybe we should periodically remind ourselves that Allen is barely more than a kid and that he might have some issues we shouldn’t laugh about.

But instead we’ll probably wind up with another season of breathless Twitter takes and loud boos in opposing arenas.