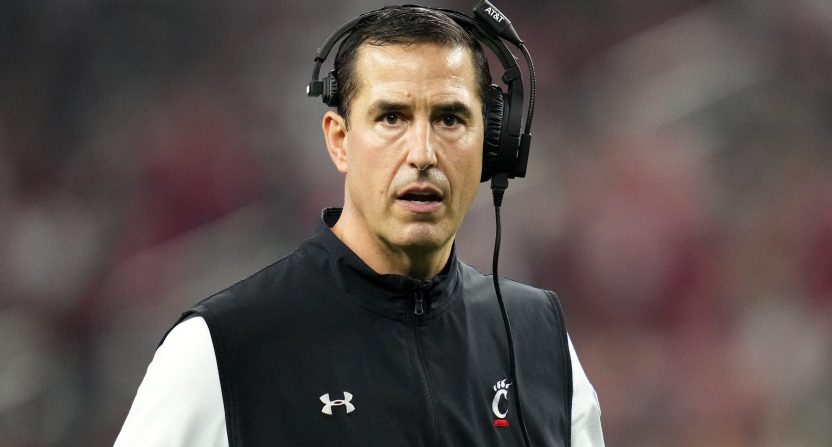 The 2022 college football season is about to kick off. Here are five football coaches from the Group of Five/independent programs to keep an eye on this season:

Given Sean Lewis‘ age and relative success, he looks like a fast-rising star. When Lewis was hired in 2018, he was the youngest coach in the FBS. In a short period, he has lifted Kent State from one of the worst teams in the nation to one of the better mid-majors. The Golden Flashes finished either first or second in the MAC East Division over the past three years and have been to two bowl games. Lewis is a Dino Babers protégé, having worked under Babers at Eastern Illinois and Bowling Green.

Lewis will get a lot of exposure early, because Kent State has a brutal non-conference schedule with games at Washington, Oklahoma, and Georgia. That should get the Golden Flashes battle-tested when they open MAC play in October. Kent State is picked to finish second in the East behind Miami-Ohio. Another strong season and Lewis might be ready for a major-conference promotion.

The younger brother of former USC coach Clay Helton is making a name for himself. Tyson Helton returned to Western Kentucky to bring back the high-scoring days the program enjoyed under Jeff Brohm.

Mission accomplished. The former Brohm assistant has made the Hilltoppers one of the most exciting teams in the nation. In 2021, they led the FBS in passing offense (433.7 yards) and were second in scoring (44.2 points) and total offense (535.3). Quarterback Bailey Zappe set FBS single-season records for passing yards (5,967) and touchdown passes (62).

What made the season even more stunning: Zappe only played one season at Western Kentucky. Let’s see what Helton can do with Austin Reed, a former Division II star at West Florida. The Hilltoppers are predicted to finish third in Conference USA. If Helton can exceed expectations and get the program to its fourth bowl trip in as many years, he will be a name to watch.

Unless you’re Notre Dame, life as an independent is challenging. BYU has operated without a conference since 2011 after leaving the Mountain West. The good news is that the Cougars will join the Big 12 next year. Credit Kalani Sitake for raising the program’s profile. He has led the program to bowl games in all but one season and back-to-back top 25 appearances in the final poll. This year, the Cougars are ranked in the preseason for the first time since 2009.

Sitake is a good example of why it pays to be patient. There was a time when it looked like he was on the hot seat. Sitake rebounded with his finest season yet, going 11-1 in 2020. He was rumored to be in consideration for the USC job. With BYU moving to the Big 12, Sitake might be more inclined to stay. But he could be in the mix for West Coast jobs.

It’s hard to imagine that Jamey Chadwell is going to be in Conway, SC much longer. Over the past two seasons, he’s 22-3. In 2020, the Chanticleers finished No. 14 in the final AP 25 poll. Last season, they picked up their first-ever bowl victory since joining the FBS in 2017, beating Northern Illinois 47-41 in the Cure Bowl.

Chadwell has been rumored for jobs before, including Virginia Tech. It’s reasonable to assume that the Tennessee native would be a possibility for SEC openings this winter.

Coastal Carolina was picked to finish second in the Sun Belt Conference’s East Division behind Appalachian State. The Chanticleers should be a contender again. Quarterback Grayson McCall was named the conference’s Preseason Offensive Player of the Year and lineman Josaiah Stewart was the Preseason Defensive Player of the Year. Another great season and Chadwell will be able to pick his next spot.

This is the final season Luke Fickell can qualify for this list since Cincinnati joins the Big 12 next year. Fickell has elevated the Bearcats to heights never previously seen after reaching the College Football Playoff. That’s an amazing achievement that speaks to his coaching acumen. He might not have a better season at Cincinnati than last year when the team went 13-1 and was ranked No. 4 in the final poll. So, what’s next?

There’s a belief that Fickell is waiting for the right job offer. Some have speculated that Michigan would have made a run at Fickell if Jim Harbaugh got the Minnesota Vikings job. Who knows what the landscape will look like in the winter, especially in the brave new world of conference realignment. Cincinnati will be rebuilding after losing nine players to the NFL draft. While Cincinnati is ranked higher in the AP poll, Houston is a slight favorite to win the AAC.