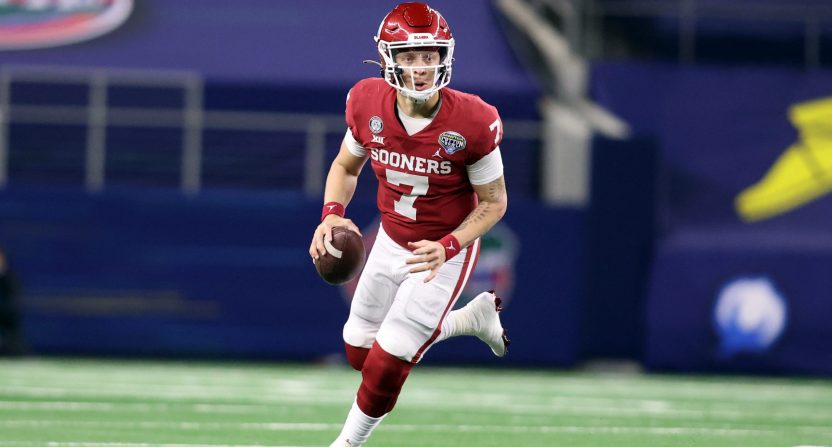 It sucks to lose your job. No matter your age. The sense of loss stings quite like nothing else. Now, imagine losing your job publicly for all the world to see. Take it even further, imagine it happening while you’re in college.

Oklahoma’s Spencer Rattler has gone from Heisman hopeful to humiliation. A quarterback predicted by some to be the nation’s top college football player — and a high pick in the 2022 NFL Draft — has been benched. No 21-year-old deserves that precipitous drop.

For now, Rattler remains on the Sooners’ roster. He’s QB2, backing up freshman Caleb Williams. Last weekend, when Oklahoma fell behind at Kansas 10-0 at halftime, there was speculation that Rattler might return to the lineup. But the Sooners (8-0, 5-0 Big 12) rallied for a 35-23 victory. Looks like coach Lincoln Riley is going to ride or die with Williams. Meanwhile, Rattler must put on a supportive face and be a good teammate.

No one wants to hear complaints. Oklahoma is a national championship contender.

But the transfer rumors started the moment Rattler was pulled against Texas. The redshirt sophomore was already struggling through an underwhelming season: 10 touchdown passes to five interceptions. Not terrible. But certainly nowhere near the numbers of a Heisman Trophy candidate. He’s sixth in the Big 12 in passer efficiency rating (153.2).

Rattler hasn’t said that he wants to leave and hasn’t entered the transfer portal. But in an age when it is easier than ever to switch schools, it’s reasonable to assume that Rattler will be playing somewhere else in 2022. Fansided has listed Tennessee, Arizona State, Miami, Mississippi State, and UCLA as best fits. Arizona State might make the most sense since Rattler is from the Phoenix area. However, an NCAA investigation in recruiting violations could be a deterrent.

Wherever Rattler winds up, here’s hoping that he finds success. Yes, college athletes transfer all the time. And Rattler isn’t the first to fall short of expectations. But perhaps it was unfair to put that massive burden on an amateur. Especially one with a relatively short track record.

Last season was Rattler’s first with significant action. He spent his freshman year as a backup to Jalen Hurts in 2019. We have grown to expect Oklahoma quarterbacks to put up big numbers. Riley has a well-earned reputation for getting the most out of his passers.

He turned Baker Mayfield and Kyler Murray into Heisman Trophy winners and No. 1 overall draft choices. Hurts was a Heisman runner-up and second-round pick. All three are NFL starters. It seemed reasonable to assume that Rattler would be the next stud in line. But Mayfield, Murray and Hurts were transfers from Texas Tech, Texas A&M, and Alabama respectively. Rattler was Riley’s first high school-to-college starter. And while Rattler was the No. 1-rated quarterback in the class of 2019, it still can be a transition.

Rattler saw limited action in three games his first year at Oklahoma, allowing him to preserve his redshirt year. In 2020, after some initial growing pains, he finished strong with 28 touchdowns to seven interceptions. Over his final seven games, he had 15 touchdowns to two interceptions.

He was a first-team All-Big 12 selection and became just the second Oklahoma quarterback to be named a Football Writers Association of America Freshman All-American (Sam Bradford is the other, in 2007). Even more impressive, Pro Football Focus ranked him fourth nationally, behind Alabama’s Mac Jones, BYU’s Zach Wilson, and Ohio State’s Justin Fields. All three of those guys were first-round picks and have started as NFL rookies this year.

PFF predicted that Rattler would win the Heisman and lead Oklahoma to the national title. So, the hype entering the 2021 season was legit. But we were still talking about a guy who had only one season of starting experience. Sometimes those quarterbacks continue their trajectory. Sometimes they slip. In the case of Rattler, he slipped a lot.

If you take out the game against FCS Western Carolina, he has thrown five touchdowns with five interceptions this season. He threw two picks in the season opener against Tulane. Those are alarming numbers. Against Texas, after an interception and a fumble, he was benched.

Rattler hasn’t said much, but his father had some interesting comments. He said his son is “keeping his options open.”

“For right now, he’s focused on working for this team, and we’ll see what happens after Jan. 10,” Mike Rattler told the OU Daily. “Hopefully, he’ll be playing in the national championship on Jan. 10, and then after that we’ll evaluate where he is as far as if any teams are interested in him in the NFL, we’ll consider that.”

The NFL in 2022 seems like a longshot. The best choice would be to remain in college, and Rattler will have several suitors. Hopefully, he’ll find the right one and find the right home.