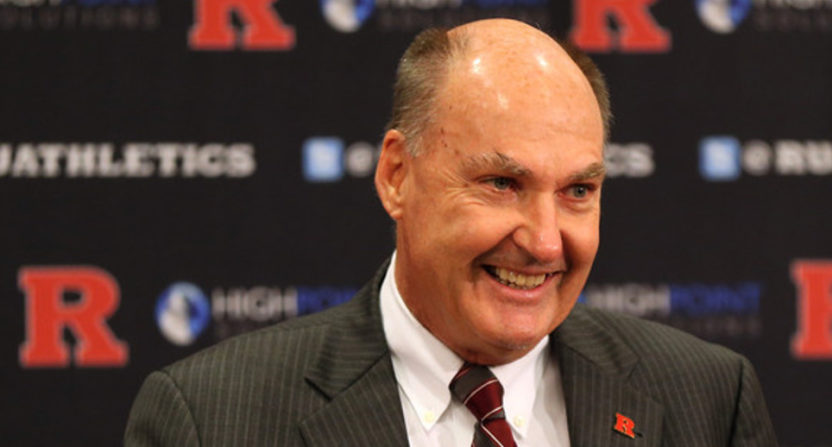 The stage was set for Big Ten commissioner Jim Delany.

Faced with the harsh reality that the Big Ten conference champion would be left out of the College Football Playoff for the third year in a row, it was time for Delany to tell the college football world that enough was enough and it was time for a change. Yes, someone is always going to be left out when it’s four spots for five Power Five champions, but it’s clear the Big Ten continues to draw the short straw. (Well, the short straw for anyone not named the Pac-12, which still only has two appearances in five years.)

As the leader of the Big Ten, it’s up to Delany to make the case for his conference, his football programs, and his fanbase that the league simply can’t be sitting on the sidelines any longer for the playoff.

If there is anyone in the current college football power structure who can expedite the process towards a more inclusive eight-team playoff, it’s Delany. So there it was, the perfect opportunity to push for expansion with Ohio State not only not making the Top 4, but even insultingly finishing behind SEC championship game loser Georgia at 6th in the final standings.

So what did Delany do with that opportunity to push for reform?

No, his reaction to Ohio State and the Big Ten being left out for the second year running was to just sit there and take it.

In text message to @TheAthleticCFB, Big Ten commissioner Jim Delany says he's not frustrated w CFP rankings. "Obviously would love to be in system every year but have respect for those chosen and offer sincere congratulations to players and coaches at Alabama, Clemson, ND and OU"

More Jim Delany to @TheAthleticCFB : "Proud of our teams, players and coaches in 2018. We look forward not backwards and appreciate the great conference competition/conference race. … We define ourselves, and CFP does its job with a four-team field."

Delany then went onto the Big Ten Network and basically shrugged it off as though this was no big deal, that the conference and its fans should just simply roll with the punches. He even specifically addressed the topic of playoff expansion without prompting and proceeded to throw cold water all over the idea by saying it could be something that might possibly potentially be looked at somewhere down the line.

Can you imagine what the SEC would be doing if Alabama won the conference and were left out of the playoff two years in a row? There would be an uprising the likes we’ve never seen before in college football. It would be getting non-stop coverage on ESPN. It would be an unending controversy. And yet, Delany and the Big Ten are just rolling over and letting this happen because they still think it’s 1960 and a Rose Bowl berth is enough of a consolation prize. Thank goodness the Pac-12 is right alongside the Big Ten on the bottom of the Power Five totem pole so that tradition can be preserved.

It’s a sad reflection of the priorities of Delany and the Big Ten when he’s more aggressive in proposing to move the entire conference to Division III if schools ever had to pay student-athletes than he is trying to advocate any change to the playoff. Maybe Delany would have actually said or done something constructive on behalf of Ohio State and the Big Ten if the committee had threatened to take BTN off of those east coast cable packages instead. It’s clear that the priorities of the Big Ten are making money, not what happens anywhere else. Rutgers and Maryland aren’t exactly great resume builders anywhere but in the Big Ten’s profit/loss statement at the end of the year.

In fairness, this discussion isn’t even about whether Ohio State deserves to have made it into the Top 4 this year. Even level-headed Buckeyes fans would agree that they were way too inconsistent to be in any real serious contention for the fourth spot and that it’s impossible to forget the memory of being blown out on the road at Purdue. The same was true last year with the blowout loss at Iowa. Those are tough for any program to overcome, even one the caliber of Ohio State.

The larger issue at play here is that this was a chance for Delany to shake it up and make sure that his conference (and everyone else) had a seat at the table every year. If he really thinks Ohio State, Michigan, and Penn State would have a chance in a playoff if they were let in, then why not do something about it! Why just hand out empty plaudits and talk about how many ranked teams the conference beat and how good of a year it was when your entire conference season was just rendered absolutely meaningless?

One of the arguments against expanding the playoff is that it would make the regular season have less meaning. That couldn’t be further from the truth. Because we just witnessed Ohio State score the most points in the history of the biggest rivalry in college football and it didn’t mean a dang thing. It was just passed over thanks to a four-team playoff, forgotten about like it never even happened because of “strength of schedule” and “eye tests” and whatever the committee hit on the dart board for their rationale this year.

What is meaningless right now is the Big Ten and its conference champion. Maybe someday, someone will care enough to do something about it.

An eight-team playoff is surely the way this has to go. Every Power Five champion gets an automatic bid with three at-large spots, one guaranteed to the top Group of Five school. In that system, everyone has a pathway into the playoff. It makes too much sense for everyone, it would make a ton of money, it would be a massive success, and it would actually be fair for all. Only in FBS college football do half of the schools that compete (like UCF in spite of their back-to-back undefeated seasons) know they have no chance to win a championship no matter what they accomplish. An eight-team playoff is the way to make right decades of wrong in college football. (And that’s to say nothing of all the interest and money it would draw.)

Instead, Delany and the rest of the college football power structure clings to the status quo for reasons unbeknownst to anyone else, even in spite of it being a detriment to himself and his conference. Everyone wants an expanded playoff to happen except the people who can actually make it happen. What could be more fitting for college football than that?

12 thoughts on “Jim Delany could have been the hero we needed for playoff expansion. Instead, he chose to uphold the broken status quo.”