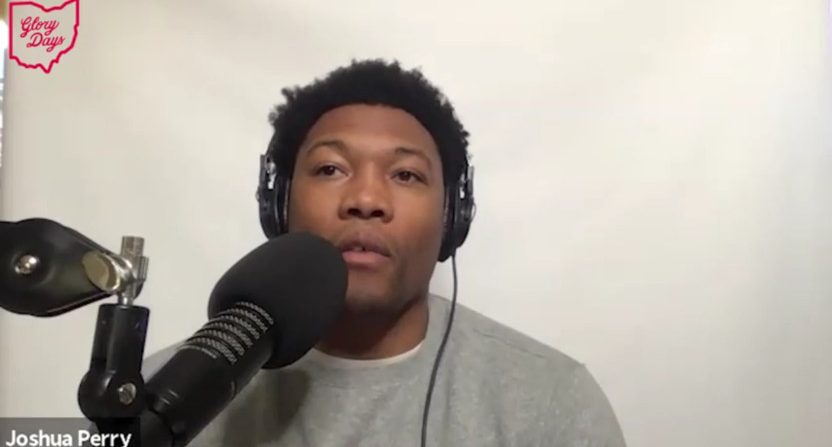 The “Glory Days: Dreams & Nightmares” podcast about Ohio State’s 2014 NCAA football title and the surrounding years has already seen some headlines, including for podcast co-host Joshua Perry (also a Big Ten Network and Field of 12 contributor) weighing in on then-coach Urban Meyer’s driving. Well, their latest podcast is a more positive slant on someone associated with Ohio State; that would be current Cincinnati Bengals’ QB Joe Burrow, who played for the Buckeyes from 2015-2017 before transferring to LSU for 2018 and 2019, and winning the Heisman Trophy and the national title that latter year before being drafted first overall by the Bengals in 2020. Perry (seen above) said on the podcast this week that Burrow impressed him for the amount of work he put in without a lot of equivalent talk:

“His mentality from day one on campus was ‘Shut the fuck up, follow the old guys, work as hard as I can.’ And you don’t necessarily get noticed doing that early on, because you’re not making the noise. You get noticed two to three months in, you get noticed in training camp, because guys are like, ‘Man, this guy, he’s just working, he’s doing everything right.'”

We’ve certainly seen some similar quotes about Burrow before, but this one is still interesting considering the source. This is from a former Ohio State player on a very Ohio State-focused podcast, and there certainly might be some expected slams at Burrow (who chose to transfer away from OSU  in 2018 once Dwayne Haskins was set to be named the starter) from a podcast so centered on the Buckeyes. But Perry’s comments here perhaps help indicate part of why Burrow has found success elsewhere, at LSU and now in the NFL. And they’re definitely an interesting look at how Burrow has approached football, and how his approach of minimal self-promotion has sometimes worked out.