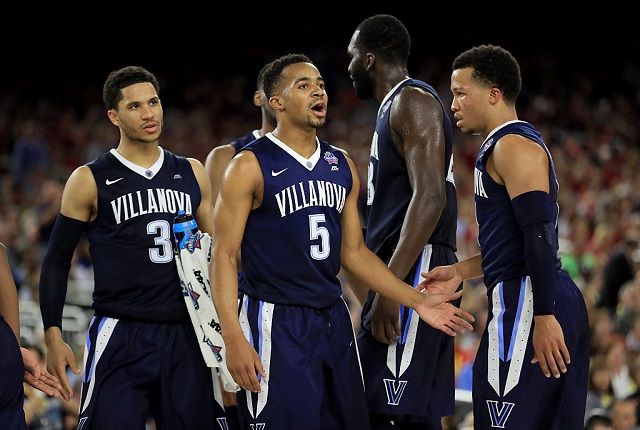 The 2015-16 college basketball season just ended Monday night with Villanova’s exciting win over North Carolina. The buzzer-beating thriller wrapped up a season in which no true favorite emerged, leaving plenty of potential national title contenders and many surprises in the NCAA Tournament.

Though the confetti and streamers have just been cleaned up, it’s never too early to start thinking about what’s to come. Here are 10 storylines to watch for when the 2016-17 college basketball season tips off.

Can Villanova make a legitimate run at a repeat?

The Westgate Las Vegas SuperBook has Duke as the favorite (9-to-2 odds), followed by Kentucky (6-to-1) with Villanova (8 to 1 odds) third. Villanova loses Final Four MOP Ryan Arcidiacono and its best low-post scorer in Daniel Ochefu.

The returning players are good enough to give Villanova a puncher’s chance. Kris Jenkins, author of one of the biggest shots in NCAA championship history, is back. So is Phil Booth, who gave the Wildcats an unexpected title game boost off the bench. Mikal Bridges and Jalen Brunson were contributors as freshmen. Jay Wright’s team will add five-star recruit Omari Spellman, who will be expected to replace Ochefu.

Matching last year’s 35-5 record seems unlikely, but another trip to the Final Four is possible.

Is Grayson Allen on his way to being the national player of the year?

Allen seems like a safe choice. The Duke guard will be the top player for the likely preseason No. 1 team. He should be even more efficient, with the Blue Devils having a deeper roster and more scoring threats.

The junior has also emerged as the bad boy of Duke because of multiple tripping incidents. By staying a third season, Allen should establish himself on the Mount Rushmore of most hated Duke players. Christian Laettner, J.J. Redick, Shane Battier, and Danny Ferry currently occupy those spots. Could he nudge out Ferry?

Will Kentucky’s incoming freshmen be better than last year’s freshmen?

Every year, John Calipari brings in one of the best recruiting classes in the nation, which usually delivers a long NCAA tournament run. But sometimes — as in 2013 and 2016 — they don’t. Last year’s class produced sensational shooting guard Jamal Murray, but Skal Labissiere was a disappointment.

This year’s incoming class has four McDonald’s All-Americans and could bolster what was a suspect frontcourt. Bam Adebayo should give the Wildcats some much needed interior muscle. The 6-foot-9, 250-pound Adebayo is a low-post scoring threat. Sacha Killeya-Jones, a 6-foot-10 forward, has a versatile game.

De’Aaron Fox and Malik Monk form the backcourt of the Wildcats’ future. They will be under a lot of pressure to replace All-American guards Tyler Ulis and Jamal Murray.

How warm will be the hot seat be for Steve Alford?

The UCLA coach is acutely aware of the mounting pressure. The Bruins have gotten progressively worse during Alford’s three seasons, going from 28–9 and 22–14 to last year’s 15–17. Last month, Alford announced that he returned the one-year contract extension he signed in 2014.

UCLA hasn’t won the Pac-12 during his stint and a pair of Sweet 16 appearances in the NCAA Tournament isn’t enough. The Bruins can’t be behind Oregon, Utah, Arizona, California, USC, etc. (The Bruins finished 10th in the league and went 0-3 versus USC.) Alford’s best chance for job security will depend on a top 10 incoming recruiting class keyed by guard Lonzo Ball and forward T.J. Leaf.

If UCLA isn’t a conference contender next season, Alford might not survive.

Could Wisconsin be the team to beat in the Big Ten?

Bo Ryan’s plan worked. The former Wisconsin coach was the clear winner in a power struggle against athletic director Barry Alvarez. He resigned in the middle of last season to give assistant Greg Gard an audition. Gard guided the Badgers to a four-way tie for third place in the Big Ten and a Sweet 16 appearance. In early March, Alvarez signed the coach to a five-year contract.

Assuming Nigel Hayes returns, Wisconsin will have all its key players back from a team that went 15-8 under Gard. Michigan State, Indiana. Maryland and Purdue are all contenders, but watch out for the Badgers.

Will Louisville be triumphant or tragic?

On paper, Louisville looks like a viable national championship contender. Basketball analytics guru Ken Pomeroy picked the Cardinals as his No. 1 team for 2016-17. Of course, that assumes that Chinanu Onuaku returns for his junior season. (He has not hired an agent and is testing the NBA draft waters.) Even if he doesn’t, Louisville has center Mangok Mathiang, promising forward Ray Spalding and developing big man Anas Mahmoud. The Cardinals will also add McDonald’s All-American VJ King and Penn State graduate transfer Tony Hicks.

Off the court, however, the sex scandal looms. Louisville issued a self-imposed ban for the 2016 NCAA Tournament. On Wednesday, the school self-imposed more sanctions with scholarship reductions and recruiting restrictions. No one knows what might happen to the Louisville program and when or if the NCAA will issue its own sanctions.

Which first-year coach has the best chance for early success?

Brad Underwood became a hot name after going 89-14 in three seasons at Stephen F. Austin with a pair of NCAA tournament victories. Now, he’s in charge at Oklahoma State which will have four returning starters, including guard Phil Forte, who missed most of the year with an elbow injury. Forte and Jawun Evans could form one of the best backcourts in the Big 12.

Underwood’s biggest task is to find a way to get more out of forward Mitchell Solomon. The former four-star recruit only averaged 3.7 points and 3.9 rebounds for a team that was minus-1.2 in rebounding margin.

Is Oregon going to finally return to the Final Four for the first time since 1939?

Oregon hasn’t reached the national semifinals since winning the 1939 title to become the first-ever NCAA Tournament champion. Dana Altman built a team that was a No. 1 seed last year, reached the Elite Eight and had the winningest season in school history. The Ducks (31-7) will return four starters from last year’s Pac-12 regular season and tournament championship. They will likely be a preseason Top 10 team.

Oregon received a huge boost last month when forward Chris Boucher was granted an additional year of eligibility for 2016-17. The 6-foot-10 Boucher averaged 12.1 points, 7.6 rebounds and 3.1 blocks per game.

What kind of impact will Josh Jackson make?

Josh Jackson is the No. 1 recruit in the country, according to Rivals.com and 247.com. The 6-foot-7 forward has yet to decide where he’s going to play. Speculation has the Detroit native linked to Michigan State. He’s also considering Arizona and Kansas.

Jackson was named the McDonald’s All-American co-MVP after scoring 19 points in 17 minutes, while shooting 9-for-11 from the field. Wherever Jackson lands, it looks like he’s choosing wisely by going to an established power school with complementary pieces. Barring a catastrophe, Michigan State, Arizona and Kansas will all be in the NCAA Tournament and he’ll get a chance to showcase his skills.

Jackson’s choice will be better than Ben Simmons, who went to LSU and suffered the embarrassment of not even making the NCAA Tournament.

In the coaching musical chairs of TCU, Pittsburgh and Vanderbilt, which will be the early winner?

TCU (12-21, 2-16) will be bad again next season in a tough Big 12. Pittsburgh returns six of its top seven scorers from an NCAA tournament team. Vanderbilt loses Wade Baldwin to the draft, but gets back Matthew Fisher-Davis and Damian Jones. There’s enough talent for Stallings and Drew to win in their first seasons. In the short run, it might be a push between Stallings and Drew. Ultimately, Vanderbilt might be the big winner here. Drew was 124-49 in five seasons at Valpo with two NCAA appearances.