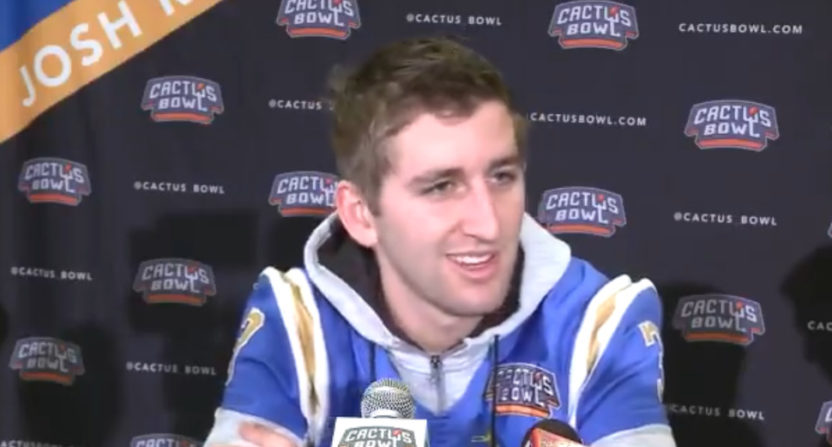 This bowl season I have just one wish…

And that is for you to enjoy the bowl season without hesitation. Embrace these last few weeks of college football, because it will be a while before we get this kind of action again. Also, stop ripping players for skipping bowl games.

Not every bowl season is going to be jam-packed with thrillers and classics, but let’s hope Saturday offered a glimmer of hope for a strong finish to the bowl season this year.

After a week of mostly lopsided affairs, we finally got back-to-back competitive contests with South Florida topping Texas Tech in a great finish to the Birmingham Bowl and Army getting the best of San Diego State immediately after that in the Armed Forces Bowl. For two-thirds of the day on Saturday, college football was fun. Then Appalachian State blew the doors off MAC champion Toledo in the Dollar General Bowl and now we’re back to hoping the momentum will pick up again.

The good news is the bowl season is about to really pick up some steam with more of the conference powers getting involved. The fun begins on Tuesday when the Big 12, Pac-12 and ACC all get in the mix, including a pair of Big 12 vs. Pac-12 contests that could be fun to watch. Later in the week, we will see Arizona’s Khalil Tate take on the surprise of the year in the Big Ten (Purdue), Virginia Tech’s signature defense go against Oklahoma State’s wild offense, Heisman Trophy finalist Bryce Love leading Stanford against TCU in a duel of power conference-runners-up.

The games will get better from there as we inch our way toward the end of the week and the kicking off of the New Year’s Six lineup with Ohio State vs. USC in a Texas Rose Bowl of sorts in the Cotton Bowl, Penn State vs. Washington in the Fiesta Bowl and Wisconsin trying to avoid allowing Miami to bring out the turnover chain in the Orange Bowl.

This is going to be a fun week of college football, I can just feel it. And after watching most of the slop we just trudged through this past week, we all deserve a string of good games this week.

Wyoming quarterback Josh Allen is considered by many draft analysts to be one of the top prospects available at the quarterback position in the 2018 NFL Draft. Shortly after leading the Cowboys to a victory over Central Michigan, Allen made it official and announced he was indeed turning pro. This was expected, considering how much hype he received going into the season. The tools are all there, with a little grooming for the next level, even though the 2017 season did not produce the kind of numbers you would expect from a top draft pick.

Today UCLA QB Josh Rosen said he would look at the NFL after the bowl game and when asked about what makes him want to play in the @Cactus_Bowl when other high profile players have skipped bowl games… he had this great answer. #UCLA #CactusBowl pic.twitter.com/fArs2leCix

A day after Allen returned after missing two games to a shoulder injury, we learned that UCLA quarterback Josh Rosen will become the first quarterback to sit out of a postseason bowl game. However, this was a decision largely taken out of his hands. Doctors have ordered Rosen to sit out of the bowl game due to fear of the quarterback having another concussion. From a medical standpoint, this make plenty of sense and we need doctors looking out for these kinds of concerns for all players.

To his credit, Rosen would have liked to play in the game, but he was well-reasoned with his thoughts about not playing and why it is unfair to criticize those who do sit out of the bowl game for similar reasons.

If you still don’t think San Diego State running back Rashaad Penny was one of the best running backs in college football this season, you’re just fooling yourself. As if Penny needed to defend himself anymore after he was blocked from a deserving trip to New York City for the Heisman Trophy ceremony and bypassed in the voting for the Doak Walker Award, Penny closed out his remarkable 2017 season by rushing for 221 yards and four touchdowns on just 14 carries against Army in the Armed Forces Bowl.

As he has been known to do, Penny wasted little time getting going with an 81-yard touchdown run in the first minutes of the game. And he did it on a 3rd and 18, naturally.

Penny rushed for over 200 yards for the fifth straight game, becoming the fourth player in FBS history to ever accomplish that streak. It was a record day for Penny with finishing the year with a school record 2,248 rushing yards. After the game, Penny said the records mean nothing since it did not result in a win.

Penny actually played a key role in Army head coach Jeff Monken making the decision to avoid overtime at all costs. After scoring a late touchdown, Monken opted to go for two points instead of draw a tie with an extra point.

“That No. 20, Rashaad Penny — if we went into overtime, he’s going to get the ball in his hands again,” Monken said (per ESPN). “There’s no way I wanted to watch that any more.”

Fortunately for Monken, he didn’t have to see Penny get one more handoff. The two-point try was good and Army prevented San Diego State from running any kind of Cal magic against them on the final play of the game.

Sadly, the college football world witnessed Penny’s final carries before he heads off to the NFL. I don’t know what the NFL future will hold for Penny, but I do know it was a damn good time watching him run the football for the Aztecs.