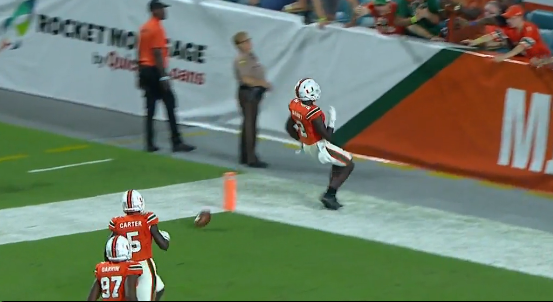 The Miami Hurricanes entered Saturday night’s matchup with Notre Dame knowing that they would play in the ACC championship game.

After the aforementioned contest, Mark Richt’s squad finds itself in position to play for an even bigger title. Led by a solid performance on both sides of the ball, Miami throttled Notre Dame, making a strong argument that it should be in the top four in next week’s College Football Playoff rankings.

Let’s be clear about what happened in this game: Miami’s defense took control of the contest from the opening whistle and never looked back. Sure, Notre Dame gained 35 yards on its opening possession, but it could only muster 33 on its next six. And, just when it looked like the Irish found a spark at the end of the first half, Trajan Brandy took an interception to the house, giving the Hurricanes an insurmountable 27-0 lead.

Of course, coming up with turnovers is nothing new for the Miami defense. By recording four takeaways (three interceptions, one fumble recovery) against the Irish, the ‘Canes have now forced four turnovers in each of the last four games. That total is more than 97 teams – including Alabama – have produced all season (before Saturday’s contests).

While the defense deserves a lot of the credit for the victory, it’s hard not to be impressed with the Hurricane offense. Yes, it had some trouble keeping the chains moving, finishing just two of 13 on third down conversions. However, running backs Travis Homer and DeeJay Dallas combined to rush for 199 yards on 30 carries, which is more than Georgia, Michigan State, and USC were able to produce against the Notre Dame D this season.

Considering that all of those opponents entered the weekend ranked in the top 15, I’d say that’s quite an accomplishment.

With the “W” over the Irish, Miami proved that it’s one of the four best teams in the country right now. Although the Selection Committee wasn’t impressed with the Hurricanes’ body of work when the initial rankings came out, it cannot ignore the fact that the team has posted decisive victories over ranked opponents in back-to-back weeks. If the goal of the committee is to get the best four teams in the College Football Playoff, it has to consider that Miami raises its level of play when it faces elite competition. That has to count for something.

Even if the ‘Canes aren’t in the top four this week, it’s important to note that the team still controls its own destiny. If Miami continues to win, it’s in, regardless of what anyone else does.

There aren’t many teams that can say that right now.