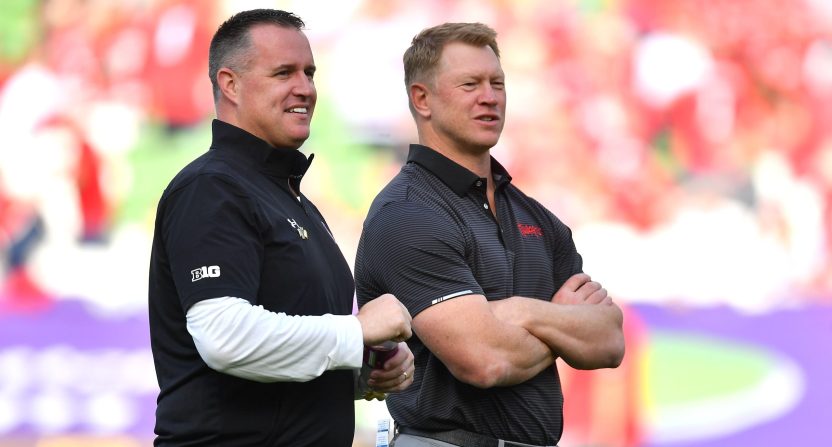 Scott Frost’s seat is only getting hotter.

The Northwestern Wildcats took down the Nebraska Cornhuskers 31-28 on Saturday in Dublin, Ireland as the headliner of college football’s opening week.

Northwestern entered the game as a 12-point underdog and trailed by as many as 11 points (28-17) in the third quarter.

The Wildcats got the go-ahead score on a four-yard touchdown run from Evan Hull with 11:34 remaining in the fourth quarter.

And Northwestern’s Xander Mueller intercepted a pass from Nebraska quarterback Casey Thompson (who did make an incredible play) to secure the win. Nebraska turned the ball over three times, while only forcing one turnover.

Northwestern with an interception to put the game away vs Nebraska! 🏈🇮🇪 pic.twitter.com/wvnRcEORtB

It all went downhill for Nebraska after a bizarre decision by Frost to attempt an onside kick with an 11-point lead in the third quarter.

Nebraska attempts an onside kick with an 11-point lead. pic.twitter.com/DlOPkwuNpB

Following this onside kick with 9:09 to play in the third, Northwestern outscored Nebraska 14-0. pic.twitter.com/F5vXV99LMP

After the game, Frost admitted, “If I did it over, I wouldn’t make that call.”

Scott Frost says he made the onside kick call.

So, it’s another brutal loss for a Nebraska team that last won at least six games in 2016. The Huskers are now 15-29 under Frost.

(At least there was free alcohol — and a massive cup snake — for Nebraska fans to consume — until it ran out — at Aviva Stadium.)

It’s a fantastic win for Pat Fitzgerald and Northwestern, though. The Wildcats have already matched their 2021 Big Ten win total with the victory.

Here’s a look at how the college football world is reacting to Northwestern’s upset win over Nebraska:

David Pollack said “I’m picking Nebraska as well, so screenshot this in case we’re all wrong”

And here we are much to the chagrin of Husker fans pic.twitter.com/CauSBtA9lR

If you ever wanted to see many, many people do simultaneous surrender cobras, here's the crowd feed at the Nebraska watch party on that last interception pic.twitter.com/oFRa3GIqI5

Nebraska is now 5-21 in one-score games under Scott Frost.

…and 3-21 when trailing at the half. pic.twitter.com/PZKPYmLlNZ

Nebraska falls to Northwestern 31-28. The Cornhuskers are the first Power 5 team to lose 9 consecutive 1-score games since Iowa State did so from 2014-16.

Since hiring Scott Frost in 2018, the Huskers are 5-21 in 1-score games. That's the worst record in FBS over that span. pic.twitter.com/FjQzALh6EC

Northwestern waking up and realizing it's an even year: pic.twitter.com/gm5VhgAL1e

That even year feeling 😤 pic.twitter.com/jRufU4UwnD

Before boarding the bus Tuesday on the way to the airport, Pat Fitzgerald told me: “No one’s giving us a f—ing chance.”

After having his least-competitive Northwestern team, a heartening start for Fitz.

Defies pretty much everything we've ever thought we knew about close games and randomness.