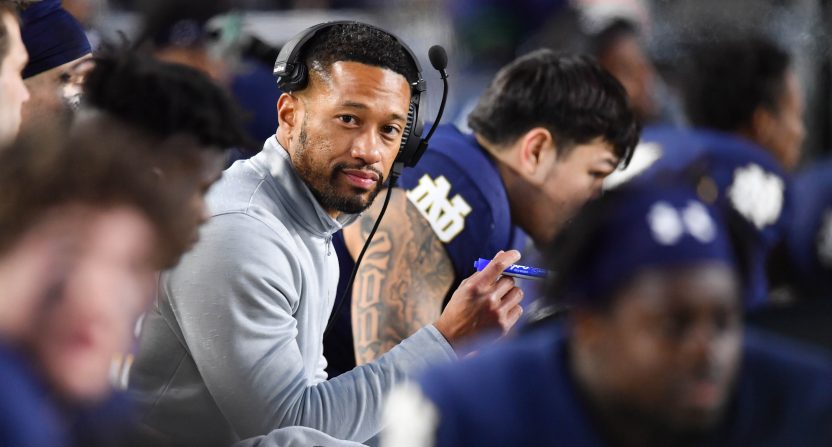 The college football world was rocked on Monday when it was reported that Brian Kelly was leaving Notre Dame to become the new head coach of the LSU Tigers. In a week that includes Lincoln Riley leaving Oklahoma to take over at USC, it’s saying something that this is the bombshell we did not see coming.

That means the Notre Dame job is now going to be arguably the most coveted gig available, with all due respect to Oklahoma, Miami, and Virginia Tech. Plenty of people are throwing Urban Meyer’s name out there since he seems miserable in the NFL and it’s been said this was one of his dream jobs. However, it remains unlikely that Meyer will jump in the middle of the season to take the role.

Instead, it’s more likely that Notre Dame looks to poach a coach from another program, just as LSU did to them. The most obvious target has to be Cincinnati’s Luke Fickell, who is in a position to lead the Bearcats to the College Football Playoff baring an epic collapse this weekend. There’s also Matt Campbell at Iowa State, Mark Stoops at Kentucky, and Brent Venables out of Clemson.

But the Irish also have a very viable candidate in-house as well. Defensive coordinator Marcus Freeman has been a hot commodity on the coaching circuit in recent years and is almost certainly going to be the team’s interim coach for their bowl game this season. Ironically, he almost took the DC position at LSU last year but ended up taking the Notre Dame one instead.

Brian Kelly to LSU confirmed. @PeteThamel first. Hearing salary will be in $15 million per year range. DC Marcus Freeman obvious ND interim but also could be auditioning. Is this Matt Campbell's time?

Freeman could make a lot of sense for the Irish. He would be a continuity hire, ideal for keeping players from transferring and recruits from de-committing. He’s got great bona fides with Big Ten coaching experience and years as a high-level assistant. There’s a decent chance that Notre Dame could lose him to a high-profile opening elsewhere as the carousel continues to churn. And there’s also a perception that Freeman has been passed over for jobs in the past as a black coach. Giving him the keys to the Notre Dame football program is a great look for everyone, as well as the sport in general.

There were plenty of people on Twitter voicing appreciation for Freeman and hope for all of this to happen.

It’s a good day to be Marcus Freeman

3 THINGS for my #fightingirish family.

1. Wow, just landed in Boston to mass chaos, panic, and uncertainty with my @NDFootball team.

2. I can promise you this Irish fans, the program is in the best place it’s been in a long time AND We’ll be just fine.

Funny you say this as Marcus Freeman more than likely has an audition vs. Mel Tucker in the Fiesta Bowl. https://t.co/y5fpkg0txy

If Notre Dame hires Marcus Freeman as Head Coach, this will be the closest I’ve felt Notre Dame is to a National Championship in a very long time.

Give Marcus Freeman anything he wants. Now.

There are sure to be plenty of rumors and reports in the days ahead and we’ll see how things play out for Freeman and Notre Dame as the dust clears.