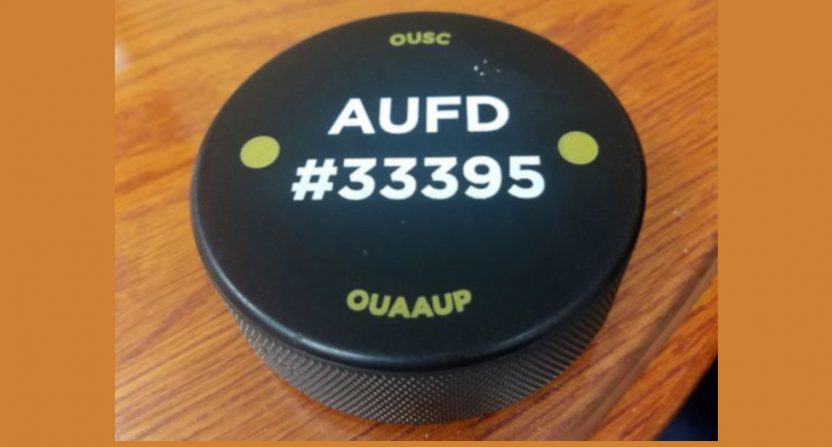 We’ve come to perhaps the strangest use of hockey pucks in a while. As detailed by Natasha Dado of ClickOnDetroit.com (the website of Detroit NBC affiliate WDIV), faculty and students at Oakland University in Auburn Hills, Michigan have been given hockey pucks, with the faculty being trained to use them to thwart active shooters:

Faculty at Oakland University are being trained by university police to fight gunmen in their classrooms.

The training sessions have been organized by OU’s faculty union, the American Association of University Professors.

…In addition to training, the union has also distributed hockey pucks to its members and to students.

According to [campus police chief Mark] Gordon, to fight effectively, faculty and students need to be prepared to throw objects that are heavy and will cause a distraction.

Here’s more from Ann Zaniewski of The Detroit Free Press on how this came to be:

The idea of using the quirky self-defense tool grew out of a training session Police Chief Mark Gordon led in March for faculty members on what they should do if a gunman enters their classroom.

A participant asked what people could bring to campus to be better prepared in case they need to fight back. The university has a no-weapons policy.

Gordon’s advice? Be ready to throw something — anything — that could distract a shooter, even a hockey puck, as a last resort if fleeing or hiding aren’t an option.

“It was just kind of a spur-of-the-moment idea that seemed to have some merit to it and it kind of caught on,” Gordon said.

Following up on the suggestion, Tom Discenna, a professor of communication and president of the faculty union, spearheaded an effort by the union to purchase 2,500, 94-cent hockey pucks — 800 for union members and another 1,700 for students. Distribution of the pucks on campus began earlier this month.

That’s quite the change from the usual uses of hockey pucks, but it makes some sense. They’re certainly cheap, portable, and easy to throw. And the union is also using these as a fundraiser to try and raise money for interior door locks (locks that can be activated without leaving the room) for all classrooms to further help with active shooter situations. The number on the pucks is one that people can enter on the university website to specifically donate towards that effort, and the union is donating $5,000 outright towards that cause as well.

This certainly isn’t the way anyone hoped hockey pucks would be used, but there’s some logic to it. It’s unfortunate that this is about active shooters rather than the school’s hockey team, though.