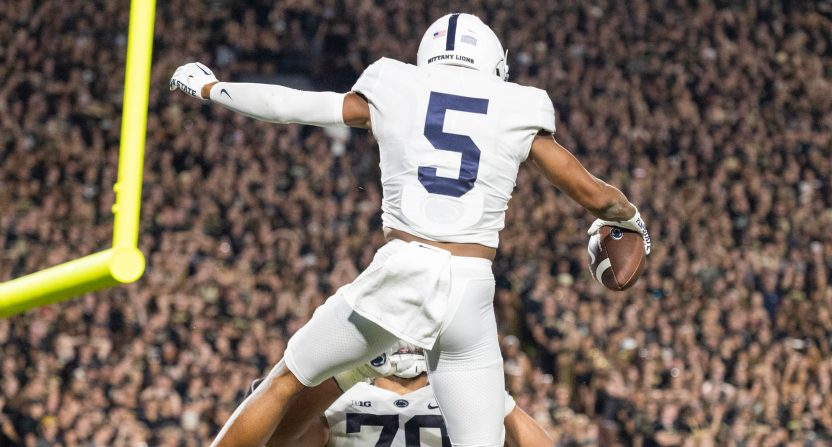 Just in case anyone out there forgot about how crazy college football can be, the final minutes of Penn State’s win over Purdue on Thursday should provide all the reminders needed.

The Nittany Lions won the game when Sean Clifford found running back Keyvone Lee for a 10-yard touchdown pass in the final minute. The touchdown and ensuing PAT gave Penn State a 35-31 lead — and that score stood as the final. On its own, that tells us that this was an exciting game. But how we got there takes the game to a different level.

Penn State led 28-24 in the fourth quarter and was driving to score a touchdown that could have put the game away. Clifford threw a pass to a wide-open Mitchell Tinsley, but his throw was well over Tinsley’s head. It fell into the arms of Purdue defensive back Chris Jefferson, who returned it 72 yards for a touchdown. For good measure, he also puked on the sideline shortly after crossing the goal line.

Chris Jefferson left it all on the field for that 72-yard pick six 🤮😅 pic.twitter.com/WsoGG4q8WR

The wild sequence got the college football world talking.

purdue DB chris jefferson just picked off a pass, ran it back 72 yards for a touchdown, and then promptly vomited on the sideline. college football is back, baby

Clifford's throw was so bad it made Jefferson puke.

Nothing like the ole pick 6 and puke to get the people going pic.twitter.com/1DRD8q0PFh

Puke Six to take the lead. Nothing quite like this sport.

Penn State couldn’t do anything on its next two possessions, but Purdue’s offense couldn’t take advantage. With just over two minutes left, the Nittany Lions got the ball back and went on an 80-yard scoring drive. That culminated with Clifford and Lee connecting on the winning touchdown.

This Penn State touchdown would serve as the game-winner on the road against Purdue! 🏈 pic.twitter.com/NWQNIIqpgM

If Penn State was hoping for a decisive win to make a big statement, that didn’t happen.

The nailbiter drew a big reaction.

What a W by Penn State.

Damm penn state!! My heart can’t take games like that no more! But 1-0!

That Penn State game just took a year off my life. pic.twitter.com/hGGXfFkbxR

If the college football season is filled with games like this and the Backyard Brawl between Pittsburgh and West Virginia, this season will be a lot of fun. We can only hope that college football fans don’t pull out too much in all of the excitement.