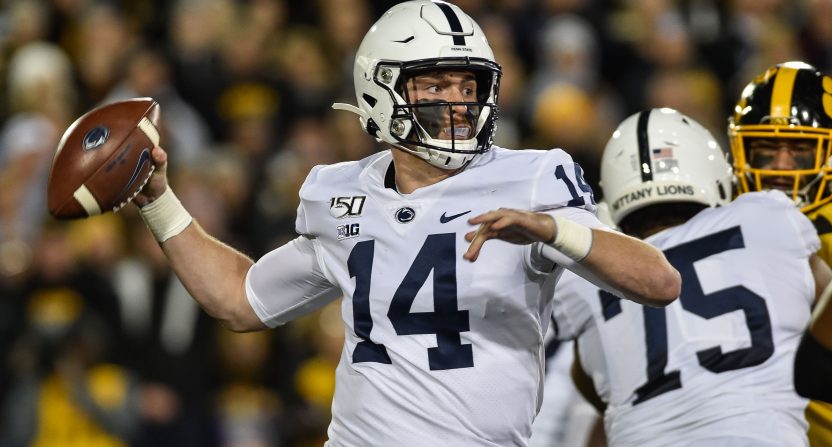 No. 3 Ohio State has been widely regarded as the best team in the Big Ten. Few would argue against that theory. Judging by the polls, No. 8 Wisconsin is the next best option in the conference with a matchup between those two teams coming up on the horizon at the end of October. But nestled in the happiest of valleys sits the No. 10 Nittany Lions of Penn State, and they may be building a season where they could be ready to pounce.

After getting through their first five games with few instances of any real adversity — a halftime deficit against Buffalo, a slow start against Pitt — Penn State was finally put through a meat grinder with the first of three seemingly telling games on the schedule. But behind a strong defensive effort and the rising star of running back Noah Cain, the Nittany Lions managed to score their second road win against Iowa (currently ranked No. 17) in three years under the lights of Kinnick Stadium. Two years after Trace McSorley delivered a game-winning touchdown on the final play of the game, Penn State celebrated another low-scoring defensive battle that didn’t have to go down to the final second. Final minutes, sure, but not seconds.

There were certainly some ominous moments for Penn State in their 17-12 victory against Iowa, but they overcame all of them. One was a touchdown pulled off the board after a Big Ten video replay review overturned a touchdown catch by tight end Pat Freiermuth and marked the ball down at the one-yard line.

Penn State would have to settle for a field goal after this, as a pair of holding penalties pushed the ball back further. And beyond that, there was the circus catch for an Iowa touchdown hauled in by Brandon Smith (which came on the first play immediately after Iowa quarterback Nate Stanley fumbled the snap, but recovered the ball for a first down).

It was fair to have legitimate questions about Penn State heading into the Iowa road game. Although Penn State just cracked their way into the top 10 by winning their games and other teams, well, not, this was a game many people were waiting for to truly judge Penn State. The offense may have had a rough start (which has at times been a theme this season for the Nittany Lions), but the defense shone when it needed to. And winning on the road against a ranked opponent was something that instills confidence in a team still growing and developing. All of the pieces may not be quite there to give a team like Ohio State a serious challenge, but there are some very positive signs with what Penn State has been able to do with the schedule now halfway in the books.

Penn State still has their own hurdles coming up in front of them that must be cleared before the Buckeyes enter the mindset. Next week, the Nittany Lions host Michigan. The Wolverines manhandled Penn State in Ann Arbor last season, and these two teams have exchanged home blowouts each of the past three years. This one may be closer as both teams are showing off their defensive abilities this season (and each doing so at Iowa’s expense the last two weeks).

Then, the following week, the Nittany Lions head to East Lansing to face a Michigan State team that has no offense but has stunned Penn State each of the past two seasons even without it. And don’t look too far ahead now, but the Nittany Lions have a road trip to Minnesota at the start of November. After blowing out Nebraska on Saturday night, the Gophers are off to a 6-0 start and have Rutgers and Maryland coming up next before that game.

Penn State has done everything it was supposed to halfway through their season. The biggest challenges are still upcoming, but this team looks capable of playing themselves into an interesting conversation. Beat Michigan next week, and it’s game on.