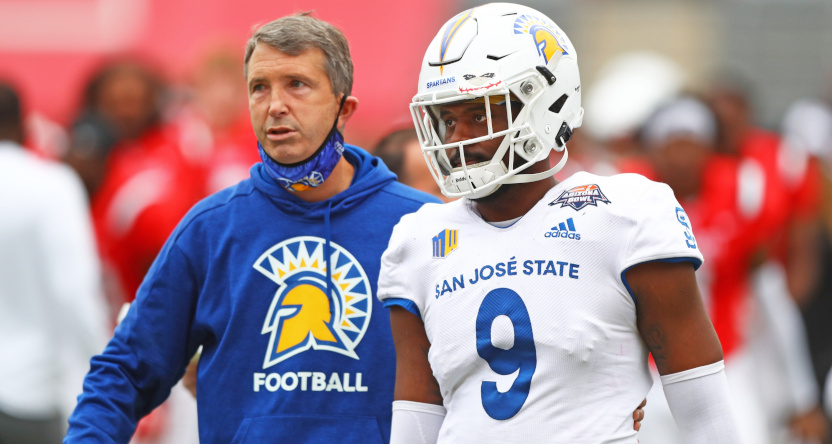 While the San Jose Spartans’ football team’s season officially ended with a 34-13 loss to the Ball State Cardinals in the Arizona Bowl on Dec. 31, some people associated with the team have had to remain in Tucson under quarantine protocols after testing positive for COVID-19. And, interestingly enough, the news of this didn’t come from the school. Rather, it came from from their home health authority in Santa Clara County. Elliott Almond and Darren Sabedra of the San Jose-based The Mercury News has more on this:

The San Jose State football team that concluded a historic season last week has 13 confirmed cases of COVID-19, according to data provided by Santa Clara County.

San Jose State officials acknowledged this week for the first time that members of the football team’s traveling party tested positive for COVID-19.

School officials have not announced how many people are involved. [Senior director of media relations Kenneth] Mashcinchi said those who traveled to Arizona were tested daily, including before the game.

“Individuals who tested positive or were deemed close contacts in Tucson did not travel back to San Jose on December 31 and are isolating or quarantining,” Mashcinchi wrote.

It is unclear whether the 13 confirmed cases reported by the county include those from the Arizona trip.

As noted in Almond’s piece, this isn’t the first controversy the Spartans’ football team has caused. Previously, head coach Brent Brennan’s decision to bring his team back to San Jose after a 34-20 win over Boise State in the Dec. 19 Mountain West Conference championship game created controversy, especially with Brennan (seen above with linebacker Tysyn Parker during the Dec. 31 Arizona Bowl) giving his players a week off to go visit families over Christmas. Santa Clara County executive Dr. Jeff Smith criticized the team for ignoring the county’s 10-day mandatory quarantine for those returning from out of state, and suggested that they might even be stopped from travelling to the Arizona Bowl. That didn’t happen, but there were clearly some problems that showed up for the Spartans even before they left, with Almond noting that a school message on Dec. 28 indicated that more than one individual who had tested positive visited the football facilities between Dec. 25 and Dec. 27 (when the team left for Arizona).

Of course, the Spartans are far from alone in battling COVID-19 issues during this college football season. Tons of games were cancelled this fall after outbreaks, including two involving their team (thanks to outbreaks at Fresno State and Boise State, not issues with their program). And this particular story is partly drawing attention thanks to Santa Clara County taking a harder stand on sports than many other counties; that led to SJSU playing a “home” game in Hawaii and two “home” games in Las Vegas down the stretch this year thanks to county restrictions, which also caused the NFL’s 49ers to relocate to Arizona for “home” games. So what’s happened here isn’t necessarily beyond what’s gone on elsewhere; a COVID-19 outbreak at Ohio State even caused some uncertainty about the date of the upcoming CFP championship game, although it now appears that’s set to go ahead as planned. But the details of the outbreak at San Jose State are certainly notable, especially with those coming from the county health department rather than the school. And it’s also interesting to hear that some members of the SJSU travelling party have had to stay behind in Arizona.