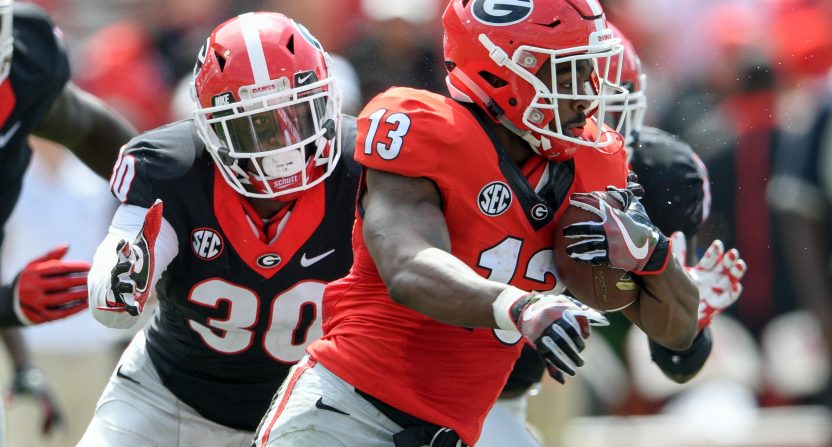 College football — we need to have a conversation.

You’ve managed to bore me to death over the past month, and it is all about the most exciting thing you could do in the spring: the annual spring game.

I mean, could spring games be any less relevant than they are today? Seriously. Regardless of the crowds that turn up at places like Alabama, Auburn, Michigan, Nebraska and Ohio State, the action on the field has been downright useless to watch and few folks actually are turning up in the stands. It all adds up to spring games needing to end should they continue on their current trend. Fans, players, and coaches would be better served by not having the game at all if what we’ve witnessed this year continues to happen.

After slogging through 14 spring games across the Big Ten and plenty more outside that footprint, one thing has become crystal clear to me: These “games” are doing a disservice to everyone involved. I’m well aware that every school puts different emphasis on the spring game and spring practice in general. Situations off the field, injuries and coaching philosophy largely dictate what a specific spring game or camp looks like. But there has been a growing trend towards irrelevance of the spring game on the field over the past three or four years.

This year took the cake for me, though. I witnessed BTN televise a whole practice that was just a two-hour long infomercial for Northwestern and featured next-to-zero actual coverage of the practice going on. I saw Wisconsin put on an hour of regular drills and no starters in the “scrimmage” portion. There was even freaking two-hand-touch from Ohio State and countless schools holding star players out while fans were hoping to get a glimpse of their favorite players.

It’s a shame because there’s no doubt that interest in college football is at an all-time high. We’ve seen 100,000-plus at Ohio State’s spring game, while schools like Clemson, Michigan, Auburn and Nebraska regularly draw sell-out or near sell-out crowds to their spring games.

But the Alabamas and Ohio States of the college football world are the exception to a rule that is becoming increasingly obvious: No one wants to see backups and drills while trying to get their 5-year-old into college football. After all, the point of attending a spring game is to get a free (or small charitable donation) glimpse of a team you may not be able to afford to see in the fall in person, right? But fans have been treated to less and less fun on the field, great charitable moments aside.

Heck, even an up-and-coming Maryland program, one that went to a bowl game after a 6-6 season couldn’t draw more than a handful of people to its spring game — and the Terps are supposed to be all about this new energy around the program.

Guarantee there are more people at the party you're currently attending than were at the Maryland Spring Game. https://t.co/8dUJGIp2bv

Attendance matters aside, there’s also the football side of things to consider here. My biggest issue lies with what happens on the field, or better yet… what doesn’t happen.

It used to be that spring games were about real competition and fans getting their look at the stars or replacements for star players for the upcoming season. It also used to mean an actual scrimmage with real tackling and offenses and defenses attempting to deceive each other. None of that happens in the vast majority of spring games today. Even “steaks for winners” moments and punishments for losers are more window dressing than fostering actual competition on the field.

Oh, and the spring game (along with the other 14 practices) used to be about keeping the guys in some sort of shape between the seasons. If there’s any reason not to do spring games, it is because they have little-to-no bearing on getting the 115 players back in shape these days. There isn’t a day in the life of a college football player that isn’t structured around keeping them in shape during the offseason or around getting game-ready during the season.

We aren’t talking about 1925. This is 2017 and college football players are year-round athletes. Does a spring game really make or break one’s ability to stay in shape or impress a coaching staff?

We haven’t even mentioned the paranoia that has come with spring games being televised to a national TV audience. Coaches are a paranoid bunch to begin with; do you really think they are going to install new offensive wrinkles in a spring game the whole world can see? The answer is a resounding no. Most coaches would rather not do a spring game, and it largely has to do with the ability of the outside world to see what is happening internally. That player you wish you could hide as a secret weapon… if they flash in the spring game, an opponent in the fall isn’t going to be caught off guard anymore. This is how the mind of a paranoid college football coach works.

There’s also the issue of injuries, and spring games have become more and more about just getting some work in and getting the heck off the field. Wisconsin’s spring game is a great example of this, as they did an hour of practice drills followed by an hour-long scrimmage. However, that scrimmage didn’t include the vast majority of the starters in an effort to protect players from injury.

Ton of starters no longer in pads for the #Badgers before the scrimmage portion of practice begins.

It didn’t stop injury from happening though, as backup running back Sam Brodner got a major knee injury scare just cutting on a play trying to get out of the end zone in a simulated goal-line pressure situation.

Ohio State took things a step further than the Badgers did, going two-hand touch while the starters were in. All of that in front of a capacity crowd at an Ohio Stadium that is undergoing renovations, while charging people $5 to get in (all of it going to a charity, of course).

For the fan, this type of situation has to be disappointing and that’s been the consensus opinion on Twitter across the country.

Sign your spring game is a tad on the boring side: Your head coach skips the third quarter.

Not sure any realistic Gator fan came away pleased from Spring game. Was kinda boring and meh, just showed me more work needs to be done

For the coaching staff, what is the point of two-hand touch scrimmaging? In fact, one could get injured a lot easier by not going full speed than actually playing all-out if someone isn’t mentally on their game. Protecting players has been a concern of college football coaches since, oh, I don’t know — the start of college football. That’s nothing new, but the lengths to which coaches are going to today certainly is.

I’m sure the coaches could come up with a more useful practice situation for the 15th and final practice of spring camp than two-hand-touch or no starters in the mix. After all, we hear coaches preaching about maximizing every second of spring ball for every player possible. Is two-hand-touch football really maximizing the needs of all players and the practice at hand, or is it being done because Urban Meyer knows that nearly 80,000 fans have come to see J.T. Barrett, Mike Weber and the host of returning starters?

The spring game also used to be the fans’ only real way of understanding who is making up the team they are going to see in the fall. However, coverage from traditional and online media — including conference TV networks — has made access to the team and the goings-on easier for the average joe to gain.

Simply put, there is no need for the spring game anymore. At least in the format that is currently being put together in large parts of the country. Yes, another tradition in college football will be gone — but if all you are witnessing is another practice or two-hand-touch football, is it really a spring game anyway?

I’d much rather see coaches maximizing practice time behind closed doors than going through the motions just to placate fans. That will make for a better product in the fall, and there are plenty of other ways to allow fans to interact with the team they love so much.

The spring game isn’t likely to go away anytime soon though, especially with changes coming in the recruiting world. However, those changes could likely see schools getting back to making the spring game an event worth paying attention to. After all, who doesn’t want to put their best foot forward for new official visitors that could make it up to the spring game?

Unless the changes in the recruiting calendar make teams take the spring game more seriously, expect the current trend of boring, uneventful and meaningless action to keep going as far as the eye can see.

1 thought on “Is it time to say goodbye to the college football spring game?”