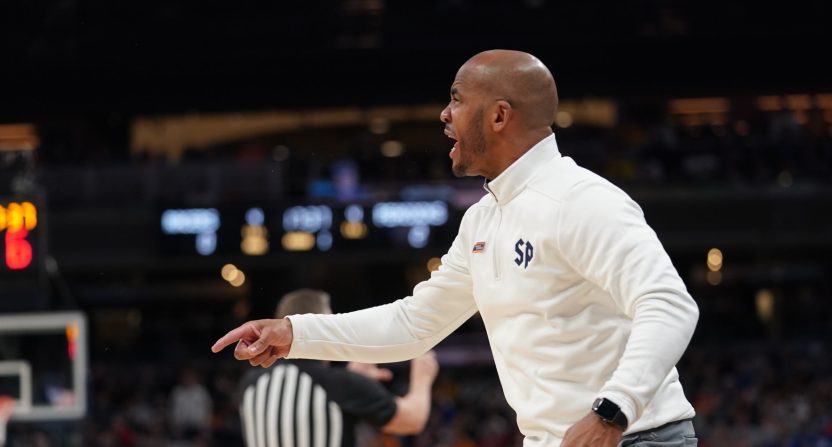 The Saint Peters Peacocks have been the talk of the NCAA Tournament thus far following their miraculous upset of the 2-seed Kentucky Wildcats as well as a decisive victory over the 7-seeded Murray State Racers.

Their success has put many eyes on the program and, in particular, the spectacular coaching job that head coach Shaheen Holloway has done to get them this far.

The Peacocks are still very much alive in the NCAA Tournament and will face off against the Purdue Boilermakers in the Sweet Sixteen with yet another chance to overcome the odds on Friday. However, it’s very likely that the program will need to look for a new head coach at the end of the season. Matt Norlander of CBS Sports reported on Monday that Seton Hall is expected to hire Holloway as their head coach once their run is over.

The only power-conference jobs open at this point: South Carolina and Seton Hall. (Missouri technically, but that’s a rubber-stamp deal with Dennis Gates in the next 24 hours.) Seton Hall is expected to hire Shaheen Holloway once Saint Peter’s dream NCAA Tournament run ends.

“If I’m not here next year, I’d love if Shaheen Holloway is here,” Willard told the New York Post on Saturday.” That would be the greatest thing that ever happened to me.”

Holloway has deep ties with the Seton Hall program, playing there from 1996 to 2000 as well as being an assistant coach under Willard from 2010 to 2018 when he took the job at Saint Peter’s.

It certainly seems like a no-brainer for Seton Hall to hire the up-and-coming head coach given his ties with the program and the excellent job he has done at Saint Peters. But for now, Holloway and the Peacocks will focus on the miraculous run that has brought them to a Sweet Sixteen date against Purdue on Friday, with a potential trip to the Elite Eight on the line.