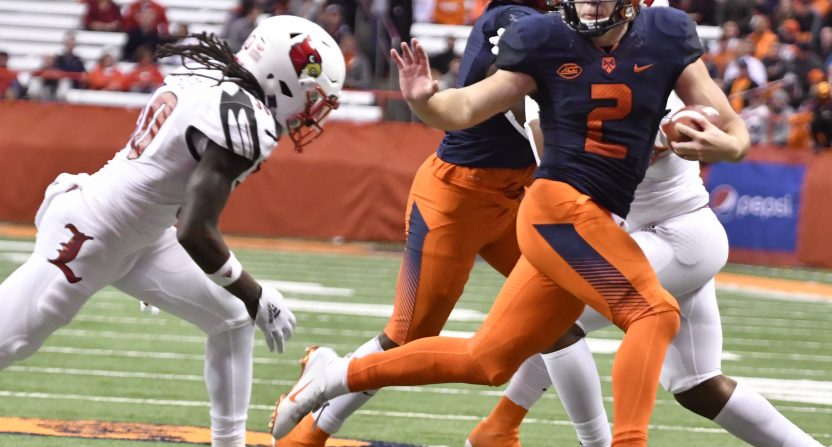 The 2018 season has already been a wildly successful one for the Syracuse Orange. Coming into Week 11 of the regular season, Syracuse had already climbed to its highest rank in the AP Top 25 since 1998, and a complete 54-23 manhandling of a woeful Louisville team Friday night on Senior Night in the Carrier Dome  did nothing to suggest the Orange will do anything but continue moving up in the new batch of rankings in the coming days.

Suddenly, Syracuse fans are legitimately thinking about the possibility of seeing their beloved football program playing in a New Year’s Six bowl game, and it’s not at all without reason given the current environment. That is what makes next week’s game against No. 3 Notre Dame in Yankee Stadium all that much more important for both teams.

The Fighting Irish are currently in the thick of a playoff race as the season comes down the final stretch. Undefeated as they prepare to host a struggling Florida State program this weekend in South Bend, it looks to be pretty certain the Irish will make their way out of the dugout in Yankee Stadium next week with a clean 10-0 record with just two games left to play. And the way the College Football Playoff picture is looking, it’s looking like a given that an undefeated Notre Dame would be one of the four teams sent to the playoff at the end of the season.

The Irish have had some close calls in their past few games — a 19-14 home win against emerging ACC Coastal Division favorite Pittsburgh and last week’s 31-21 win at Big Ten West Division leader Northwestern, which turned out to be a bit tighter in the second half before the Irish pulled away — but Syracuse looks to have the kind of offense that could pose the most serious threat to Notre Dame’s playoff hopes. It starts with Syracuse’s ability to run the football with running back Moe Neal ripping off long runs against Louisville and quarterback Eric Dungey doing his part to contribute on the ground. The two players combined for four touchdowns on the ground against Louisville.

Second pass Eric Dungey got away with. Should probably have thrown two interceptions now but Louisville defenders just can’t quite get their hands on the ball well enough.

Using Syracuse’s performance against Louisville shouldn’t be used as the best example to suggest why Notre Dame should be concerned about their upcoming game against the Orange. Louisville is a program in complete disarray and the talk about what to do with Bobby Petrino will only escalate over the weekend following another disappointing performance to fall to 2-8 on the year. However, the game can be used to demonstrate where Syracuse will need to improve if they are to hand Notre Dame their first loss of the season and throw a possible wrinkle in any playoff aspirations.

That’s where Dungey come into play. Dungey has been a major part of the Syracuse offense constructed by head coach Dino Babers, and Dungey is a significant reason why Syracuse has reached a record of 8-2 and continues to climb the rankings, but he had some moments against Louisville that should be reviewed in the film room this week in preparation of facing Notre Dame. In the first half, Dungey appeared to force a couple of throws when he really shouldn’t have. One pass was thrown to a receiver in an area with four Louisville defenders sitting around him. Later in the half, a Louisville defender perfectly read Dungey’s eyes and got a step in front of the pass. Fortunately, Louisville had a case of the dropsies and couldn’t make Dungey pay on either attempt Syracuseause lived to see another play.

Against Notre Dame, that may not be the case.