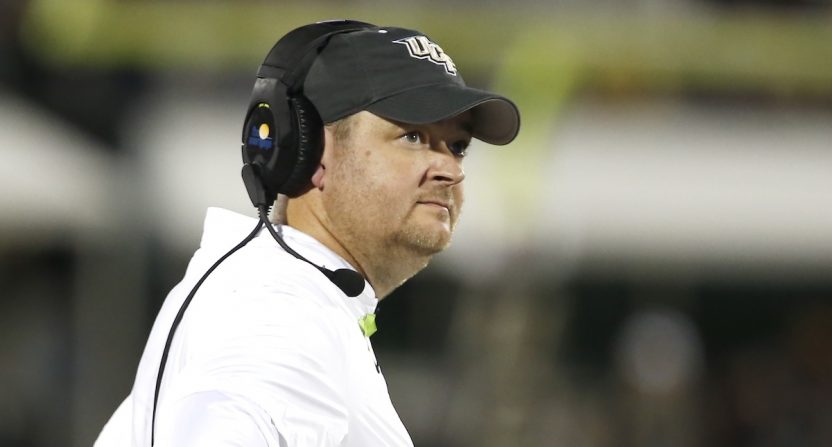 The University of Tennessee may have finally gotten it right with selecting a new athletic director and head football coach.

Recovering nicely from the disastrous three-year run under Philip Fulmer running the athletic department and Jeremy Pruitt leading the football team, the Volunteers hired Josh Heupel from UCF as the new head coach.

Heupel takes over 10 days after Pruitt was fired amid allegations of recruiting violations. In three seasons at Tennessee, Pruitt went 16-19, including a 3-7 season in 2020. He also went 0-9 against Alabama, Georgia, and Florida, the SEC schools Tennessee fans view as top rivals. Fulmer stepped down at the same time, saying another athletic director should select the new coach. Defensive assistant Kevin Steele had been serving as the Vols’ interim coach.

Last week, Tennessee tabbed Danny White to be the school’s athletic director following a five-year tenure overseeing the UCF program. Considering he hired Heupel to lead the Knights’ football program, it probably shouldn’t be a surprise that he brought the coach from Orlando to Knoxville. Yet during Wednesday’s introductory press conference, White said that Heupel wasn’t the first coach he considered, largely because he didn’t want to hurt UCF by hiring him away.

In three seasons at UCF, Heupel compiled a 28-8 record (19-5 in the American Athletic Conference). His first season was spectacular with a 12-0 record and bid in the 2019 Fiesta Bowl (getting squeezed out of the College Football Playoff), which the Knights lost, 40-32, to LSU.

Heupel, 42, does have experience coaching in the SEC with one season as the offensive coordinator at Missouri. Prior to that, he was the quarterback coach at his alma mater, Oklahoma, working as a co-offensive coordinator for the final four of his nine seasons on Bob Stoops’s staff. He then spent one year as QB coach and led the offense at Utah State before going to Missouri.

Josh Heupel's offenses have ranked 6th, 5th, and 2nd in the country in total offense the last three years at UCF. As OC at Missouri in 2017, they were 14th.

Tennessee’s offense was hardly inspiring under Pruitt and his offensive coordinator Jim Chaney. That should change under Heupel, whose UCF attacks were among the best in the nation during his tenure. More importantly, Heupel develops quarterbacks well. At Missouri, he coached Drew Lock into an NFL prospect. And at UCF, Dillon Gabriel threw for over 3,500 yards in each of the past two seasons, averaging 30 touchdown passes.

But despite Heupel’s coaching pedigree and his accomplishments as a college player — leading Oklahoma to the 2000 national championship — Tennessee fans might not warm up to a coach who isn’t from the South nor familiar with the program’s history and culture.

Negativity from Vols fans toward this hire was addressed by White when he was asked about it during Heupel’s introductory press conference.

Tennessee's new athletic director just ripped the negativity of a big part of the fanbase: "Some of you are awesome, some of you are failing right now." pic.twitter.com/0qIIIsdVhE

“Why would we be negative?” said White. “The idea of turning your passion and something that you love into negativity, I don’t understand that. We have really great days ahead.”

To be fair, Tennessee football hasn’t provided much reason for positivity since Lane Kiffin left for USC after the 2009 season. Vols fans have seen Derek Dooley, Butch Jones, and Pruitt fail during their stints in Knoxville. (Though Jones did have a winning record at 34-27.) And NCAA penalties from the recruiting violations by Pruitt’s staff are looming.

Popular choices among fans and media to take over the Vols included Liberty’s Hugh Freeze, who coached five seasons at Ole Miss, along with Tennessee natives Jamey Chadwell of Coastal Carolina and Louisiana’s Billy Napier. Those coaches may have been a better cultural fit, but there’s no guarantee either of them would be more successful.

White’s track record of hiring coaches is excellent. At UCF, he hired Heupel and Scott Frost before him in football, and Johnny Dawkins in basketball. At Buffalo, White brought in Lance Leipold to lead the football program and Nate Oats for basketball. That, along with Heupel’s success, points to much-needed stability at Tennessee that should be welcomed.