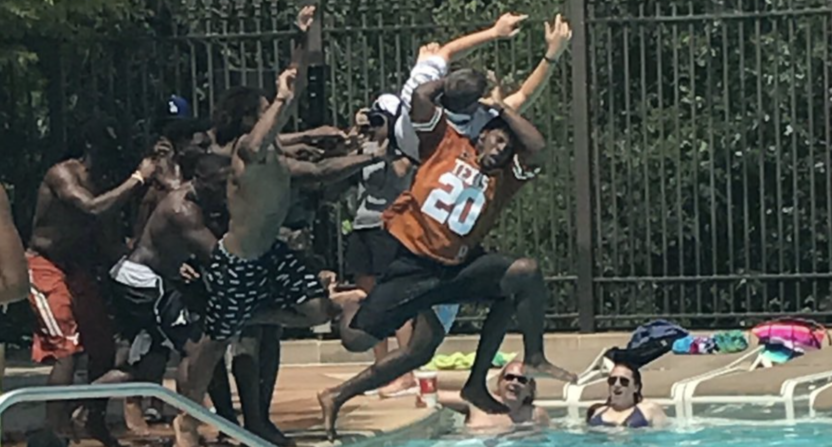 WWE superstar Randy Orton’s finishing move, the RKO, has taken on a life of its own in recent years. The move that is quick and effective is a perfect move in a pro wrestling match because you never know when it’s coming.

The move has since gone viral and inspired various clips consisting of a photoshopped Orton “RKO’ing” people in the clip who are falling or people actually doing the move to others. That also includes Orton himself RKO’ing his stepson in a pool.

The trend has arrived at college football as Texas Longhorns head coach Tom Herman was on the receiving end of an RKO at a recruitment pool party.

No offense to Coach Herman because he’s an incredibly good sport but this might be the worst taken RKO that I have ever seen.

For one thing, if we’re being specific, it appears the players have Herman in some sort of neck breaker move and not an RKO because Herman is on his back and people take the RKO on their stomach. Also, an RKO is supposed to be a surprise to the recipient of the move and everyone else around them. This seemed like it was intricately mapped out and planned like it was a 401K.

So while the move itself was a mess, it was a pretty great moment and considering it’s so hot in Austin, probably not the worst thing in the world to get thrown in a pool by a bunch of football players.