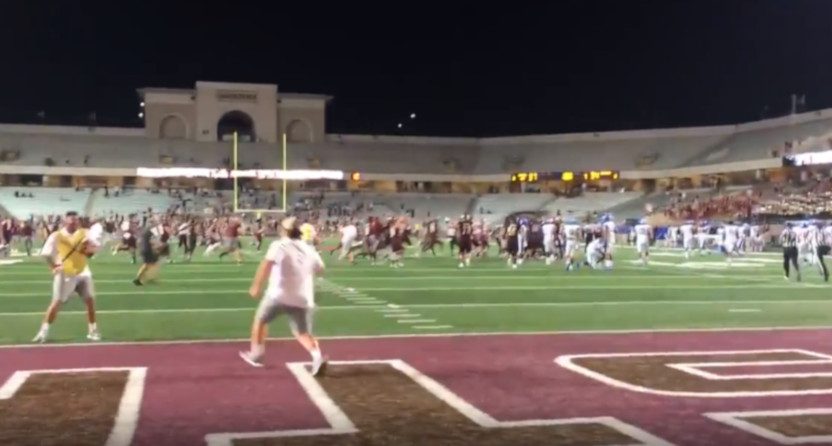 One of the crazier finishes in college football Saturday came in the Sun Belt, where the Texas State Bobcats got their first win of the season (after an 0-3 start) at home against the Georgia State Panthers (who famously beat Tennessee two weeks back before losing to Western Michigan last week). Texas State emerged with a 37-34 triple-overtime victory in the end. But that win came three overtimes after the Bobcats initially thought they won.

In the fourth quarter, Texas State’s Anthony Taylor ran 20 yards for a go-ahead touchdown that put the Bobcats up 27-24 with 4:56 left. But Georgia State then went on a clock-eating drive, including a fourth-and-three conversion on a run from quarterback Dan Ellington, and they were in a first and goal situation at the Texas State two with 33 seconds left after a pass interference call. However, the Panthers were then called for a false start, backing them up to the seven. Another pass interference call on the next play got them back to the two, and they tried to run RB Destin Coates in for the touchdown (on a play that started with 27 seconds left), but he was stopped for a one-yard loss.

Texas State celebrated that for quite a while, though, thinking they’d won, while Georgia State tried to clock the ball. That led to a crazy scramble, and to time appearing to run out. But the officials eventually ruled that the ball was spiked with one second on the clock, letting Georgia State’s Brandon Wright kick the tying field goal from 20 yards out to send the game to overtime.

Put one second back on the clock –apparently they did so based on a replay on the jumbotron? — and GSU's PAT-length FG was good. OT. https://t.co/u1nlfuDUre

Here’s further coverage of that from Nick Castillo and Drew King of the San Marcos Daily Record (their paper’s live-blog of the game is here):

This is setting up for a hell of a first win for #TXST head coach Jake Spavital, or a true heartbreaker.

There is no in between.

I really have no clue how this crew saw a second on the clock but alas we’re headed to overtime. #TXST 27, Georgia State 27

After further review, the ball was spike with 1 second on the clock @smdrsports

We are heading into overtime @smdrsports

In overtime, Georgia State scored seven on their first possession, with Ellington finding Sam Pinckney for a 13-yard touchdown. Texas State responded with a drive that saw Gresch Jensen run one yard for a touchdown in the end, aided by a roughing the passer call on the Panthers. Both teams then missed field goals in the second overtime period, and Georgia State missed again in the third overtime, letting the Bobcats kick the game-winning field goal.

That’s quite the win for Texas State, and a great first win there for Spavital. Even if it came significantly later than his team initially thought.