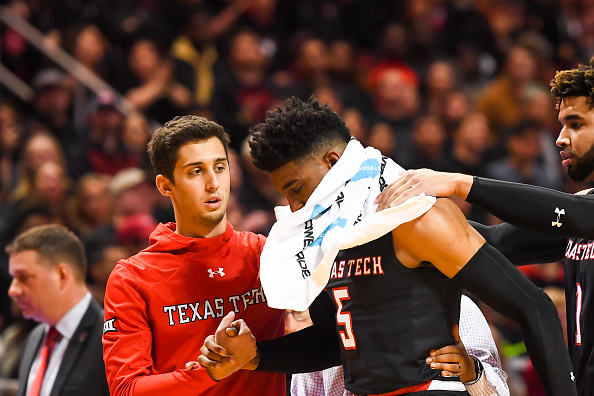 Lubbock, Texas hosted ESPN’s College GameDay last weekend for a huge matchup between the Big 12’s top two teams. The Kansas Jayhawks were looking to wrap up their 14th straight regular season conference title. And the home team, the Texas Tech Red Raiders, were hoping to delay that party a bit longer — and maybe announce themselves as a legitimate national title contender.

That game, a 74-72 loss for Tech, came down to the final seconds. It’s a respectable result for the upstart Red Raiders. But when coupled with the team’s recent stretch, it could just be the highlight amid a rough finish to an otherwise encouraging season.

A 22-4 start lifted TTU all the way up to No. 7 in the country. They were on a seven-game winning streak, scoring victories over Oklahoma and TCU in that stretch. Tech also knocked off Kansas, West Virginia, Baylor and Kansas State earlier in the Big 12 schedule, plus Nevada in non-conference play. The evidence of a potentially deadly tournament team was clearly there.

But since? Not so much. The Red Raiders have now lost four straight games, all by 10 points or less. The latest one, an 84-74 loss to West Virginia on the road, knocked them into third place in the Big 12 at just 10-7 overall. It was the most points the third-best defensive team in the country (according to KenPom) had allowed all season.

Part of the recent slide is due to a lingering toe injury for standout senior guard Keenan Evans. Since the issue first arose a couple weeks ago, he’s been extremely limited as both a scorer and defender, and it’s shown for Texas Tech. He averages 17.2 points per game, but in the three games he’s played with the injury, he’s scored just 12 points total in 74 minutes. Evans sat against West Virginia, which certainly had its effect on the outcome.

After the WVU loss, fellow Tech senior Niem Stevenson was quick to say “next man up” with regard to the injuries the team is dealing with, missing both Evans and Justin Gray. However, it’s hard to replace those two players’ contributions on the fly.

For this part, Stevenson is trying to. The guard has scored in double digits in three of the last five games, including 24 vs. West Virginia. Jarrett Culver, typically averaging under 12 points per game, scored 26 to lead the team. Zhaire Smith chipped in 12 of his own. But the rest of the Red Raiders scored just 12 points total. Starter Norense Odiase had zero points and four fouls in 21 minutes. Texas Tech’s previously balanced offense has become a three-man show — something that makes them far easier to defend.

There’s no timeline set for either Gray or Evans’s respective returns, though both could potentially be back this weekend to close out league play vs. TCU. Tech is only a game up on the Frogs right now, and a loss on Saturday could both harm the Raiders and boost TCU’s likely tournament resume.

For Tech, they’re in the field. And depending on who you ask right now, they’re somewhere between a four- and a six-seed. That’s putting some healthy consideration into the status of Evans, of course. Assuming he can come back at full strength this season, it’s conceivable that Tech sticks around that general range when Selection Sunday rolls around.

If not, though? That’s where things get troublesome for TTU. Should the Raiders lose to TCU, that’s a 22-9 record and a 10-8 mark in the Big 12, with a five-game losing streak going into the conference tournament. It could hit six if Evans is out or limited during the first game, too. What would the committee do with a Texas Tech team that potentially hadn’t won since before Valentine’s Day?

It’s tough to project how much the team would be penalized given the difficulty of schedule, and Evans’s toe. Texas Tech has five top-50 wins (two on the road), and another seven in the 51-100 range. Even with losses, that body of work is enough to sustain them as a top-eight seed.

Still, the timing couldn’t be worse for the Raiders as the season winds down. There are understandable reasons for the fall, but the struggles do put the top-four seed in doubt. Tech can still rebound, and with a healthy Evans have a productive run in this year’s postseason. That course correction needs to happen pretty quickly, however.