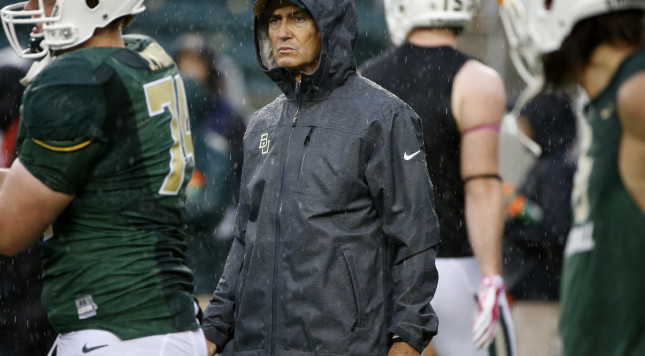 Yesterday, it was announced that former Baylor head coach Art Briles was dropping his defamation lawsuit against Baylor University. Now we may now why.

It appears that Baylor not only had cause to fire Briles for the awful actions of his players and his staff, but that he knew way more than he was letting on publicly all along. In fact, a series of court documents in a separate defamation case suggests that Briles was complicit in the cover-up of many criminal activities of his players.

The pro-Briles #truthers howled for more "transparency" hoping something would exonerate him. Here you go. pic.twitter.com/MXfIjuOJd4

The documents were obtained from a court filling by the regents in the defamation case brought by ex-assistant athletic director Colin Shillinglaw.

What is contained in them is a clear pattern of communication regarding Briles’ knowledge of and cover-up of some pretty horrific actions from his players. They include directions on things like “squeezing” a player who may have committed sexual assault, putting pressure on people not to press charges in various situations and even hiding a drug dealer from police charges and getting him a transfer to a different school to continue playing football.

It’s a far different picture than the innocent one that Briles and his team of supporters have painted since his firing amidst the ongoing controversy this past May.

One of the most disturbing incidents is the reaction of the athletic department and Briles to an alleged gang rape involving five of his players. Rather than turning players over to the police or empathizing with the alleged victim, Briles’ response?

It alleges the earliest report of a gang rape came in April 2013, when a student-athlete told her coach that five football players had raped her at an off-campus party in early 2012. She identified each player, and the coach wrote the names down, the answer says.

The coach showed McCaw the names, and McCaw told the coach to speak with Briles, the answer states.

“Those are some bad dudes,” Briles allegedly told the coach. “Why was she around those guys?”

Yes, that’s right. Briles’ first response was to question the smarts of the victim and start assessing blame on the alleged victim for being around those “bad dudes” as he put it.

It gets worse though, as it appears the Baylor athletic department tried to steer the alleged victim away from pressing charges. They even went so far as to lie about the need for her to be the one to press charges, which isn’t the case in allegations of gang rape in Texas.

The players response? Well, according to the Waco Tribune it went down like this:

The victim and her mother told another Baylor athletics staffer, and there is no evidence the unnamed staffer reported the incident to anyone else, the answer said.

The mother told the staffer the names of two of the five accused players, and the assistant football coach then interviewed them.

The players admitted to “fooling around,” and called it “just a little bit of playtime,” the answer says, and they said it was consensual.

The assistant coach told other coaches, whose responses involved victim-blaming, it says.

“He concluded that the accusations of the gang rape were in a ‘gray area’ and there was no definitive evidence of sexual assault,” the answer says.

These are but a few examples of the many highlighted the regents’ defense in the Shillinglaw defamation case.

Whatever doubt existed before about Briles’ level of knowledge about his players criminal behavior is certainly shattered now. So too is Briles’ career, as no school should let this man anywhere near its football program given the evidence that has come to light.

Winning matters in college football, but so does the bare minimum of empathy for fellow human beings and Briles clearly didn’t have that when it came to the alleged victims of his players criminal activities in Waco.