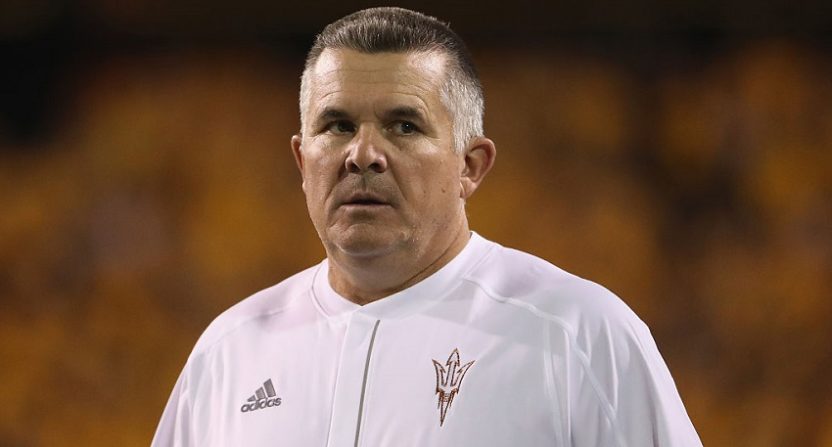 Every year it seems, a prominent coach gets fired mid-season. His team’s performance becomes so abject that the administration and fan base can’t take it anymore. Waiting for November would be the decent thing to do. But decency has become passé. Recent seasons have seen Pat Haden pull Lane Kiffin off a bus to fire him and LSU jettison Les Miles, winner of a national and multiple SEC titles, before October.

Entering Week 4, we can survey the landscape and wonder who the first coach will be in 2017. The favorite has to be Todd Graham at Arizona State. Graham’s seat blistered to begin 2017. The season has not started well. Entering conference play, it may get worse.

Graham’s Sun Devils are 1-2. The win was a one-score victory over New Mexico State where the defense surrendered 549 total yards and allowed three fourth-quarter touchdowns. ASU followed that by losing to San Diego State by double-digits at home and a loss to Texas Tech.

ASU’s flaws are the same as last season. Nothing has been fixed. The Sun Devils pass well. They can’t run the ball (125th in yards/carry) and can’t stop the run (111th in yards/carry against). Their “high octane” aggressive defense either gets a sack (sixth nationally at 4.33 per game) or gets lit up (20 plays allowed of 20-plus yards through three games).

The worrying part for Arizona State is this was the easy portion of their schedule. The Sun Devils begin conference play with a ranked Oregon (No. 24) and a road trip to Stanford in their next two games. So without a substantial upset, that puts ASU at 1-4 heading into the bye week, the optimal time for an early firing to occur.

If Graham makes it past ASU’s bye week, their first three games following are Washington (No. 7), at Utah (No. 23), and USC (No. 5). That’s a probable 1-7 start. Games against Colorado and at UCLA the two weeks following are hardly locked down wins.

Not surprisingly, things look ominous for Graham. The school extended AD Ray Anderson’s contract over the summer. Graham was not offered a new deal, the ultimate rebuke to an employed college football head coach. Anderson, it should be noted, was not the AD who hired Graham.

Arizona State’s president stressed that Graham would be evaluated on the team competing in every game and making progress each year. It’s hard to argue Graham is doing either. The Sun Devils are on pace to be worse. They started 5-1 before collapsing last season.

No time is ideal for a program to be this awful. But this is particularly bad time for Arizona State to stink. The school just unveiled a swanky new football facility. Renovated Sun Devil Stadium now cracks the vital videoboard surface area Top 10 rankings. The school raised and spent that money to compete on the field.

Arizona State, moreover, may be college football’s biggest sleeping giant. It’s a huge public university with excellent weather in a major, growing metropolitan area, and near one of the nation’s best recruiting areas in Los Angeles. The right coach could do some things there. For all the octane talk, that does not appear to be Todd Graham moving forward.

Graham may pull off a win or two and keep his finger in the dike until the end of the season. Steve Addazio may give Graham a run for first coach fired if BC can’t rebound. Things appear to be escalating in Lincoln. But without a sea-change in Tempe, Graham should be the favorite to be the first Power 5 coach cast aside.